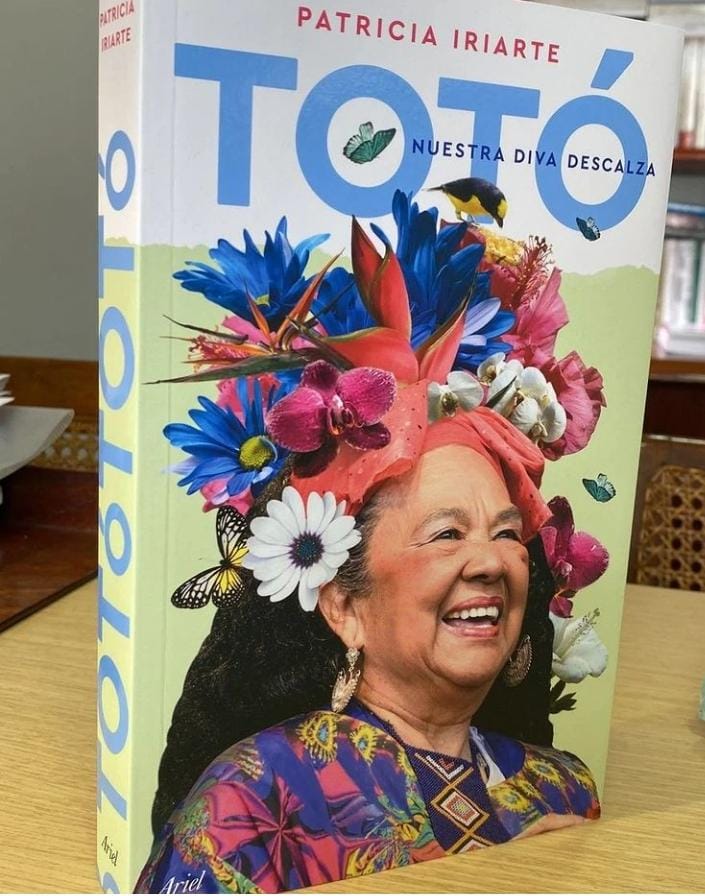 The third edition of the book “Totó, our barefoot diva” is out, a biography of Totó La Momposina written by the poet, social communicator and specialist in Caribbean studies, Patricia Iriarte, who in this new version takes up in depth some experiences of the Caribbean singer during the beginning of her artistic career.

“Totó, our barefoot diva” is the result of Iriarte’s deep admiration for Caribbean music and for the popular tradition of Sonia Bazanta Vides, whom the world identifies with the resounding name of Totó La Momposina.

Undoubtedly, Totó’s warrior soul is present on every page and in the book: his childhood, his beginnings, his early awareness of being a column of folklore… and then the trip to Stockholm, as part of the entourage that accompanied “Gabo” to receive the Nobel Prize. That scenic strength of the artist was replicated in a series of albums that today are essential to understand the music of the Colombian Caribbean.

THE NEW CENTURY: How was that process of delving into the life of an artist of the stature of Totó la Momposina?

PATRICIA IRIARTE: make a biography of Totó la Momposina was a great professional and personal satisfaction for me because since I was a child I admired her for promoting Caribbean culture through her talent as an artist. It was a process of several years; making the trips to the territories where she was and lived, conducting the interviews and being able to get to know her life up close was very fascinating. In this third edition I manage to tell Totó’s entire life, her story from before starting her career despite the circumstances she lived with her family, her musical productions, her tours, her state of health, her fears, her experiences. …

ENS: Was it easy to find the answers about the life and work of the artist to be able to write the three editions?

PI: A little, because since I was young I had the intention of writing about her, doing a biography and recounting her experiences because as a journalist I was interested in her story. I remember that I was 22 years old when I began to investigate to make the first edition and something peculiar happened to me: it turns out that I did not find what I expected, I saw that there was not much about her, just some normal press records of her physical activity, but I I wanted to see beyond. It was when I presented a project to the Ministry of Culture and through a written journalism scholarship I began my in-depth research, with trips to his environment, I was able to learn about Totó up close and then I had the editorial interest to publish it. I made the first edition of the book in 2004 and at that time the books were sold out. Then in 2011 another publisher asked me for the title to include it in a collection of the Bicentennial of Colombian literature and I was able to write the second edition, which does not differ much from the first because there was not much time to make the updates, but we were able to include some interviews and photographs; there were a thousand copies that sold out in a short time. Thus, for many years I maintained a direct relationship with the history of Totó and I never lost track of it.

ENS: After looking into Totó’s life, did you feel the need for a third edition?

PI: Last year, the Planeta publishing house suggested that I do the third edition because it was necessary to know a little more about it. Of course, this time the book is very well reviewed, with all the updates on Totó’s activity, because all the information was collected from 2011 to 2021; They were a total of ten years of work, because what was written in the first and second editions was taken into account. Already in October 2021 I began the final interviews, the documented investigation and in June of this year the review of everything. In August we made the official launch, so finally the work has paid off.

ENS: The book is already a month old since its launch. Has it had the same receptivity as the first two editions?

PI: It’s been amazing because people have high expectations for the book, it’s gotten incredible attention. Even before the book came out people were asking me the date of publication. The book has had a good reception, for example, on Wednesday when the launch was made in Barranquilla and I practically ran out of books that the publisher gives me, which correspond to me as the author. I sold them all and that tells me that people want to know more about her, about her life; It is a great admiration and devotion that there is in the country towards her, who has dedicated more than 60 years of uninterrupted work for Colombia and people continue to have respect for her, affection.

ENS: How has your career in literature been?

PI: I have been able to publish four books of poetry and other genres since 1992. In addition, I have a book called “Manual to cover war and peace”, which was published in 1999. Other work I did was on mitigation and uses Audiovisuals in the Colombian Caribbean. Literature has given me a world of possibilities, it has opened many doors for me. Reading is definitely what really forms the human being; In addition, the authors leave a literary teaching, their lyrics always cause an impact on each person who reads the works and that seems gratifying to me.

ENS: Do you think that Colombian literature has changed over time?

PI: Yes, of course. Literature is a reflection of the times. Society is what dictates the new thought models of a country and it seems to me thatthat the genre has to be dynamic, changing and according to the times.

ENS: What have been your referents in universal poetry?

PI: I admire the talent of many writers; however, a writer who has greatly influenced my career is Aurelio Arturo Martínez, I keep reading him and his ideas continue to resonate with me. Among my first poetry readings was “Mujeres Escritoras”, by Alejandra Pizarnik; I also follow the lines of Borges, Gabriel García Márquez, Héctor Rojas and many others who have promoted me in literature.

Caption 2: In 456 pages, the life and work of this woman recognized worldwide for her folk rhythms is recounted.

Reading is what really forms the human being: Patricia Iriarte