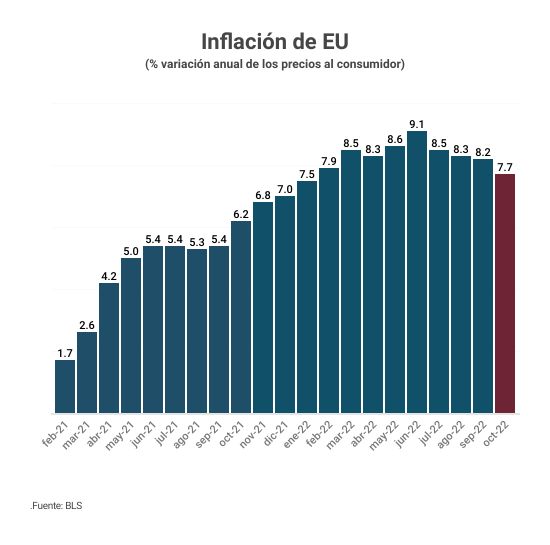 The Nobel Prize in Economics, Paul Krugmannsaid that a scenario of recession In the United States it is a possibility, but he ruled out that this represents a drastic blow to the economy, as other experts predict.

We will have a soft landing (soft landing) and a low probability of reaching a recession. In the United States we have very positive news, the most recent inflation data is encouraging

During his participation in the Meeting of the Mexican Association of Afores (Amafore), he commented that 2023 it will be a better year in economic terms than 2022although there are still some challenges.

Krugman predicts that inflation will remain high next yearalthough he considers that the Federal Reserve (Fed) is very close to reducing prices due to the cycle of interest rate hikes adopted this year.

The October figures showed that inflation in the United States stood at 7.7% per year, the lowest level recorded in the last nine monthsand below market expectations.

The Nobel Prize in Economics mentioned that although there are various interpretations of what a recession is, an indication may be an increase of around 0.5% in the unemployment rate.

At the end of last month, unemployment in the United States rose to 6.1 million unemployed peoplewhich put the rate at 3.7%, an increase of two percentage points compared to September.

For Krugman, the cuts of the companies known as ‘Big Tech’ are not enough to cause further damage to the economy. In his opinion, the effects are due to the fact that these companies are more sensitive to increases in the interest rate.

The technologies have great market valuations, but the number of employees in these companies is not that significant, so there are no knock-on effects.

Europe is most at risk

Europe has a greater risk of falling into a recession that causes more damage to the population because of the conflict between Russia and Ukraine, that shot up the prices of raw materials, especially natural gas.

Inflation rates are higher. The European Central Bank (ECB) raised interest rates even when they are not overheated, because they fear that high inflation will affect wages

However, it does not foresee a recession as strong as the one experienced in 2008 due to the crisis subprimesince he pointed out that the slowdown in economic growth is due to the measures adopted by the confinement and no to a structural problem.

🌀 Master conference on @paulkrugman in the #EncuentroAmafore2022

Recession in the US is possible, but it will not have a big impact: Paul Krugman