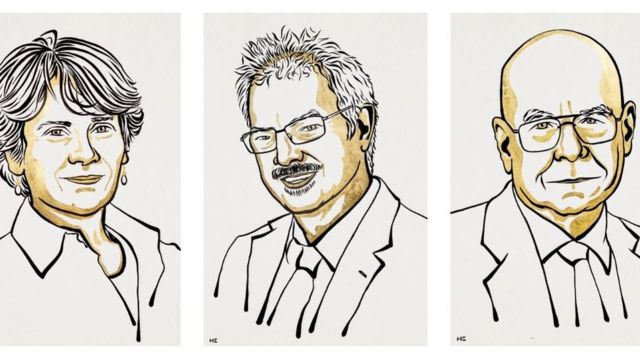 Researchers Carolyn Bertozzi, Morten Meldal and Barry Sharples are the winners of the 2022 Nobel Prize in Chemistry for their development of click and bioorthogonal chemistry.

“The 2022 Nobel Prize in Chemistry is about making difficult processes easier,” the Royal Swedish Academy of Sciences said in announcing the prize.

Barry Sharpless and Morten Meldal they have laid the groundwork for a functional form of chemistry, click chemistry, in which molecular building blocks come together quickly and efficiently.

Carolyn Bertozzi has taken click chemistry to a new dimension and started using it in living organisms.

The research of the winners has allowed to improve the orientation of pharmaceutical products against cancer.

“This year’s Nobel does not deal with overly complicated issues”

In its press release, the Royal Swedish Academy of Sciences presents the prize saying that chemists have long been driven by the desire to build ever more complicated molecules.

In pharmaceutical research, this has involved the artificial recreation of natural molecules with medicinal properties.

“This has led to many admirable molecular constructs, but they are generally very time consuming and difficult to produce,” the statement says.

“This year’s Nobel Prize in Chemistry does not deal with overcomplicated issues, but works with something that is easy and simple. Functional molecules can be built by following a direct route,” said Johan Åqvist, chairman of the Chemistry Nobel Committee.

To understand it, think about how Lego works. Some pieces have bumps and some have holes. You press them together and they click to join.

Professor Alison Hulme of the University of Edinburgh in the UK explains that the same process applies to click chemistry.

“Two chemical partners are perfectly designed to combine with each other, so when they come into contact in the right environment, they just click together,” he told the BBC.

But at first it couldn’t be used on living cells – essential to understanding disease – because it involved the use of cell-killing copper.

Their work means scientists can do “chemistry inside the human body, to make sure drugs go to the right place and stay away from the wrong place,” Hulme explains.

Barry Sharples was the one who coined this concept around 2000. Shortly after, Morten Meldal and Sharples himself, independently, presented what is now considered the crown jewel of click chemistry: copper-catalyzed azide-alkyne cycloaddition.

“Click chemistry has brought enormous advances to the chemistry, nanotechnology and materials science“, says on the other hand Raluca M. Fratila, researcher at the University of Zaragoza in Spain.

How did bioorthogonal chemistry take click chemistry to another level?

Héctor Busto Sancirián, a member of the Biological Chemistry research group at the University of La Rioja, explains that click chemistry is a “basic science”.

“And as often happens, laid the foundations for so-called bioorthogonal chemistrywhen Carolyn Bertozzi used this methodology developed by Sharpless to carry out chemical reactions in living organisms, with enormous potential for the development of new medicines”, says Busto.

In 2004, Bertozzi and his colleagues pioneered click reactions that did not require copper. When working with living organisms, too much metal could be toxic to cells and infer on your metabolism.

In this way, chemicals can modify molecules in living organisms without interfering with normal cell functions.

Bertozzi showed that his finding could be used to track glycans, for example, on tumor cells, and found that some glycans appear to protect tumors from the human immune systemso by blocking this mechanism a new drug could be created.

Many researchers have subsequently started developing selectable antibodies that target various types of tumors, explains the Swedish Academy of Sciences.

These antibodies are currently being tested in clinical trials and could also be applied in inflammatory diseases, with a potential that could impact in million patients all over the world.

The credentials of the winners

Morten Meldal was born in Denmark in 1954. He completed his doctorate in 1986 at the Technical University of Denmark, Lyngby. He’s professor at the University of Copenhagen, Denmark.

K. Barry Sharples was born in Philadelphia, USA, in 1941. He received his doctorate in 1968 from Stanford University. She is professor at the Scripps Research Institute in La Jolla, California.

Remember that you can receive notifications from BBC News World. Download the new version of our app and activate it so you don’t miss out on our best content.

Inequality in access to Covid vaccines in the world blurs the year 2021, the second of the pandemic
Ephemeris of November 28: What is celebrated today in Mexico and the world?
Bicameral Evolution, by Alejandro Cavero
Tweet
Share
Share
Pin
Other links: https://awardworld.net/resources/