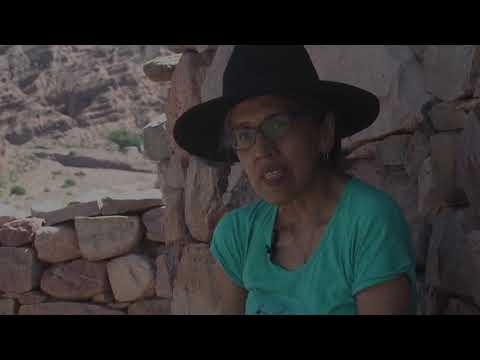 Right from the first song that is heard when filming Sara Mamani’s life begins, this very heartfelt documentary testimony marks a position towards the world on the part of this singer from Salta. The song is titled “I’m going to take care” and it refers to the place and the people where she comes from. Her mother and her father and her cultural heritage received from her. She will keep that forever and she will keep it with great care. Because they are the root of her, and she sings to them.

Sara was born in the town of Cerrillos, a small place on the outskirts of Salta Capital, which over time became urbanistically assembled. Since she was little, she was attracted to music, singing, as well as the cinema, watching movies. At the age of 12, she already played the guitar and sang at school with a trio of women. This certainly began to mark her fate. In this way, she became a singer, composer, charanguista, poet, great entrepreneur, fighter and defender of the issues of Original Peoples, Human Rights and Gender. A student of the great Cucho Leguizamón, the great Salta composer who also sometimes wrote his own songs, Sara was also nurtured -in addition to friendship and knowledge- of the art of Jaime Torres from Tucuman, who in some way encouraged her to play the charango or more precisely the ronroco; of the singing and solidarity of Teresa Parodi from Corrientes, who several times provided him with shelter when Mamani left her native Salta to live in Buenos Aires. And two other names, also unique, were mainstays and references in her expressive and daily life. The Nobel Peace Prize winner, Adolfo Pérez Esquivel, with whom she worked and was her secretary for more than two decades at SERPAJ, Peace and Justice Service. And Nora Cortiñas who little by little was able to accompany her and become a great friend of hers. She tells Sara at one point: “It was very difficult for me to go to the Rondas de las Madres”. A fundamental pillar of the Mothers of Plaza de Mayo Linea Fundadora Association. “Norita, Norita”, she repeats at one point in the film with a tender smile.

Citing these four people is unavoidable in order to fully understand the path undertaken by the poet from Salta. The course of her ideas, her actions, her desires, her struggles (which she had and there were many) and her thoughts have undoubtedly marked her on fire. About all these questions, this film tells us in the first person Sara Mamani herself. There, the work of both Susana Moreira’s direction and the script by Miguel Mirra are signified, who have chosen to show her “character” as she is, with her own voice and story. It is the singer who guides us along the path she had to walk and tells us with anecdotes and concrete facts, her experiences and her suffering, the joys and the pains.

In addition to the direct-to-camera report, the authors have combined several films with clips, television presentations, archive photos and in the manner of small home movies; meetings with friends and colleagues of Sara in the garden of her mother’s house in Salta or in rounds -dipped in talcum powder and chopped paper- during the celebration of the Carnival in Tilcara, Jujuy. Precisely these scenes – which are among the last in the film – show an unshakable sense of identity and gender. Sorority is present among those comadres who cople, who dance, who hug each other and who give their shoulder to that sister who, between emotion and pain, does not want nor can avoid tears. In a way, this marks something that many suspect: the Comadres are undoubtedly the first feminists in northwestern Argentina.

Sara shows herself as she is. She does not hide anything, she is transparent, she says what she feels and believes. Both in demonstrating his talent for playing Toad (he has a wooden game in the patio of his house with the toad, the old woman and the bronze pockets and the rest of the wooden furniture, and sometimes he puts them in with the chips), as well as to say that already in Primary school she felt strongly about the issue of discrimination (“She was the black one”) or the incessant and continuous struggle to reclaim her origins (“One has 500 years of pain”). Or being able to open up -in possibly the most emotional and hardest scene of the documentary-, when he can finally talk about the terrible illness that was discovered in 1998. A tumor behind the hatred, which meant, among many things, not being able to sing for many years. , and endure with integrity the long operation and the postoperative period. Cancer remains, in addition to being a shitty disease, a taboo subject. But Sara tells the director, her voice cracking now.

Sara Mamani has published 2 books of poetry and recorded 8 music albums, although she clarifies that “my wish is to be able to record a vinyl record”. She adheres heart and mind to Pachamama and she feels that “you have to learn to toughen up without ever losing tenderness.”

“I will ask it, I will ask the earth / not to separate its strength from me / that strength that shines in my hat / that lights me up when I dance my whole body / and that lights up this song that I give you / that strength of my land, of my land”. This is the final fragment of the air of celebration “My strength”. That word -Strength- is the one that her mother always instilled in her to face each and every vicissitude.

Review of “Sara Mamani, the name resists”, an Andean troubadour who recounts her life | WritingCinema