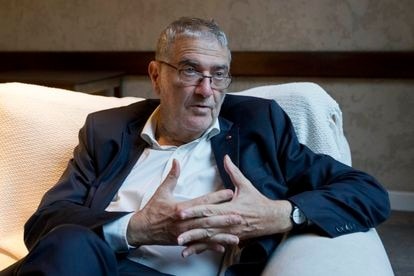 It could be said that his motivation was to kill the father. Serge Haroche (Casablanca, 78 years old) was one of the winners of the Nobel Prize in Physics in 2012 because it managed to trap and manipulate individual particles while retaining their quantum nature. His achievement was unthinkable. Erwin Schrödinger himself, one of the fathers of quantum physics, had said almost a century before that working on a single particle was impossible. Schrödinger solved it with the principle of quantum superposition: since he could not isolate and observe a physical system As the electron, assumed that it existed in all its theoretically possible states. Thus was born the famous cat of him who, locked in a box, was alive and dead until he could be observed. Where Schrödinger had written “and”, Haroche put an “o”.

Quantum mechanics has made possible the great technological advances of our time, from the first computer to the fiber optic connection. The latest award from the Swedish Academy, delivered last October 6, once again rewarded a jump over the barriers of this science. Three physicists managed to control the communication between particles hundreds of kilometers away. Until then, the so-called quantum entanglement (communication between particles at a distance without any physical link) was a mystery of science.

“Progress is a fantastic thing. The next step is always the most difficult”, says Haroche, who was visiting Buenos Aires last week, invited by the Organization of Ibero-American States to celebrate International Science Week. Retired from research a few years ago, the French physicist and professor, former director of the Physics department at the École Normale Supérieure de Paris and former rector of the College de France, came to the city with a very specific militancy: to defend research as a end in itself in the face of the urgency of the market and the constant demand for results of our time.

Ask. Measuring individual quantum systems was an unimaginable leap forward for the fathers of quantum physics. What does this teach us?

Response. It tells us that the way we look at science depends on the technology we have access to in our time. The reason Schrödinger or Einstein said this was impossible is because they couldn’t conceive of the technology that we have available.

P. What worlds were opened by your research?

R. Our work in quantum technology was based on trying to achieve goals that were impossible according to classical physics. The clearest example is atomic clocks, more precise than those that measure current geolocation. Another is quantum communication using entanglement. This guarantees secret communication, which cannot be eavesdropped on. All these fields of research are very active. Especially that of quantum computers, which is the most difficult to achieve because it has many challenges ahead.

P. The Swedish Academy has just awarded the advances in quantum communicationWhat does this achievement mean?

R. It makes me very happy, because the winners have been friends of mine for years. Research on this matter began to be explored about 40 years ago, trying to show what happens when photons remain connected by that immaterial link we call entanglement, even when they are hundreds of kilometers away. At that time there was no practical application for experimentation. We need about 20 more years until the experiments for which I won the prize showed that the manipulation of isolated quantum systems was possible. With communication we hope that people begin to believe that all this is useful for something…

P. You defend the idea that you have to focus on what you call “useless science.” What does this mean?

R. It is important to know that everything we do out of curiosity, without the need to look for a specific result, ends up being useful in ways that we do not expect. Let’s think about one of the greatest advances in our area: the laser, which makes global connection possible through optical fiber that crosses the oceans, is a notion that Einstein developed, but that took almost 40 years to materialize. A decade after its invention we were already using it to communicate using quantum repeaters, but those who developed it had no idea that this could happen. The laser is the best example of how basic science can be applied much later.

P. Lately, there’s been a lot of talk about advances in quantum computing. Companies like Google or IBM say that they have made great strides in that field. It isn’t true?

R. The quantum superposition is very fragile. Until now we are only able to control a few particles at the same time, and we need to be able to manipulate millions to achieve a quantum computer. I think there is a lot of hype because companies are competing and they need to show results. The work they are doing is interesting, no doubt, but there is still much to be done and we should not exaggerate. The history of science teaches us that technological developments are almost always a surprise, they almost never come close to our original intention. The gap between basic science and its application always comes with unexpected twists. We must be careful.

P. Are these companies careless?

R. They are not oversights, it goes through the logic in which they work: they need to show a product that is salable. I see it from a purely scientific point of view, not from that of someone who needs to produce something for profit. By being careful, I mean that we cannot predict that something will happen in two or three years, because investigations take longer and many things can happen along the way.

P. Why is there such a rush?

R. There are many fantasies that probably won’t happen. None of the great technological advances of the 20th century were predicted: the laser, the internet, the classical computer, GPS location… Even if the quantum computer can be built, it will be a huge machine, which needs to work at very low temperatures. It is not something that can be sold as a laptop.

R. I do not think so. But that idea helps us explain the giant challenge that quantum computers have ahead: the phone in your hands is more powerful than the computers that monitored the human journey to the Moon. Progress is a fantastic thing, and the next step is the hardest.

P. What has changed in research in these years?

R. Scientists at the time of Einstein and Schrödinger had a lot of support, they had good salaries. It is true that research cost less then, but everything has become more complicated in our time. Competition is greater and funding is much more limited. It has become more complicated to work: we need young people to invest their creativity in science, but their opportunities are very limited.

P. What is the role of politics in this?

R. Governments should understand that science is a long-term adventure. There is no commitment in these terms, something that we used to associate with countries with fragile political systems, but which has begun to spread: now it happens in the United States, for example. Science was neglected during the Government of [Donald] Trump, and that’s a huge problem. If we want science to tackle our most pressing problems, like climate change, we need a strong and lasting political commitment.

P. Do you think science has lost authority in our time?

R. Yes, completely. Science lives under threat. Scientists question the truths that govern our time, but they are based on rational doubts, on doubts that challenge theories that do not explain all the facts. This is why conspiracy theories are so perverse: they are based on the idea that anything can be challenged with an opinion, that opinions are valid as theories.

R. I think it is a question for sociology, but there is an explanation that we have entered a dangerous phase of globalization. There are people who have been left out, who are isolated and feel helpless in the face of the evolution that our world has promised. The response they have had is to question it in communities, in thought bubbles. And that’s a tough place for the tools of science, because they’re not good for uniting against each other. Anti-scientific thinking is something that unites people against each other, and science cannot work there because it is universal, rational and objective.

Serge Haroche, Nobel Prize in Physics: “We should not exaggerate advances in quantum computing, there is a lot of hype”