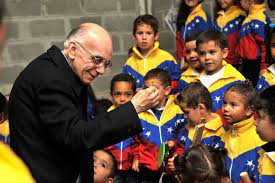 José Antonio Abreu Anselmi, affectionately known as “Maestro Abreu”, was born on May 7, 1939 in Valera, Trujillo state. At the early age of 9, he began his music studies in the city of Barquisimeto, Lara state.

Then in Caracas he studied piano at the Academy of Musical Declamation of Caracas. He then trained in organ, harpsichord and composition at the José Ángel Lamas Superior School of Music, from which he graduated as Performing Professor, Master Composer and Orchestral Director.

He also graduated as an economist at the Andrés Bello Catholic University. In 1958 he was elected deputy to the National Congress. Between 1988 and 1994, he assumed the positions of Minister of State for Culture and President of the National Council of Culture (CONAC), reports the web portal elsistema.org.ve

His passion for music led him to conceive in 1975 an educational model that through music has instilled values ​​of respect, solidarity and transformed the lives of thousands of children and young people in the world: The National System of Youth Orchestras and Choirs and Children of Venezuela.

«I fight because artistic education in general became the protagonist of the educational process. Artistic education makes, in addition to the formation of the intellect, the moral feeling is formed, the ability to appreciate the aesthetic, beauty, to experience the highest emotions of the human being is formed. Because art is the splendor of being”, is the word of maestro Abreu embodied in a special TeleSur work entitled “The transformative and inclusive legacy of maestro José Antonio Abreu”.

Musician, composer, conductor, cultural manager, public servant and teacher of several generations of Venezuelan musicians, José Antonio Abreu, turned music into an extraordinary ambassador of the message of peace throughout the world, a legacy that remains in force for 86 years of his birth.

«Maestro José Antonio Abreu left traces in Venezuela and also throughout the world. Thank you for making music an instrument of social inclusion!” wrote the President of the Bolivarian Republic of Venezuela, Nicolás Maduro on his Twitter account on April 1, 2018.

For his Social Action through music and contribution not only to universal musical culture but also to the rescue and education of millions of children with limited economic resources, Maestro Abreu received countless awards around the world, including: Ambassador for Peace and Goodwill of UNESCO; The Right Livelyhood, Nobel Prize, awarded by the Right Livelyhood Foundation, Sweden; Polar Prize, considered the Nobel Prize for Music; Frederick Stock Award; Knight Order of the Legion of Honor of France; Honorary Grammy; TED Prize; Yehudi Menuhin Award; Prince of Asturias Award for the Arts; Don Juan de Borbón Music Award; Unicef ​​Award; Gabriela Mistral Award and National Music Award of Venezuela, awarded twice.
In 2012 he was recognized with the Musical American Award for Educator of the Year.
In 2013 he received, among others, the Ibero-American Prize for Music Cortes de Cádiz and the Special Prize for Peace in Tokyo.
Recently, the Abu Dhabi International Music Festival awarded him the prize for the 2014 edition, reviews a biography in his honor published on the web portal elsistema.org.ve

In addition, the work of Maestro Abreu has inspired more than 70 countries, which following his model of inclusion through the collective practice of music, have created more than 200 programs similar to the World System of Orchestras and Choirs of Venezuela.

«To Maestro José Antonio Abreu, a man who managed to unite an entire country with his musical legacy; reference in the world, we honor him when we materialize the dreams and hopes that are born of each boy and girl of the Homeland. It is a commitment! », The head of state Nicolás Maduro wrote on his Twitter account on the 4th anniversary of the planting of Master Abreu.

El Sistema, a work of inclusion and social transformation

In 1975, in a rehearsal room with few musicians, what is currently the largest project of social inclusion through music in the world was born: The National System of Youth and Children’s Orchestras and Choirs of Venezuela.

«The national system of preschool, children and youth orchestras is contributing greatly to building, in the public space, an image of the successful Venezuelan musician, a professional career as a possibility, with status and social recognition; a model and opportunity to follow for Venezuelan youth. Likewise, new meanings related to the culture of merit, effort, perseverance and discipline are being created, as worthy paths that lead to a better Venezuela”, described Maestro Abreu during the Alternative Nobel Prize speech. December 7, 2001 his most important work El Sistema.

The System has been conceived as a collective and individual academic training model that promotes social inclusion through academic-musical teaching methods adapted to the social and cultural realities of each region or Nation.

In 1979, the State Foundation for the National System of Youth and Children’s Orchestras of Venezuela (FESNOJIV) was established, with the purpose of training highly qualified human resources in the area of ​​music and obtaining the financing required for the execution of plans, activities and programs.

In 2010 it was attached to the Vice Presidency of the Republic with the intention of “continuing to promote and develop all the youth and children’s orchestras that the same foundation has created throughout the national territory, as well as all the musical groups and educational and social programs to which has given rise to the System of Orchestras and Choirs”, reports a press release entitled “memory of Maestro José Antonio Abreu”, from the web portal of radiomundial.com.ve

In 2011, the FESNOJIV changes its name to the Simón Bolívar Musical Foundation and is attached to the Ministry of Popular Power of the Office of the Presidency and Monitoring of Government Management of the Bolivarian Republic of Venezuela.

The Simón Bolívar Musical Foundation is an institution “open to the entire Venezuelan society, which has a flexible, innovative and dynamic management structure perfectly designed and adapted to the philosophy and objectives of El Sistema. The Foundation is the legal and administrative platform designed to facilitate and materialize all programs, conventions, exchanges and agreements with decentralized public administration agencies, with Venezuelan and foreign government entities and with private and private companies,” reports El Sistema in its website elsistema.org.ve

The invaluable legacy of the teacher, musician and founder of the National System of Youth and Children’s Orchestras and Choirs of Venezuela (El Sistema), José Antonio Abreu, remains intact not only in the more than 3 million Venezuelans who make up the great family of El Sistema, but in all those people who have been touched by Abreu’s work.

The authorities of the Bolivarian Government have reiterated on countless occasions their firm conviction to continue strengthening the work of Maestro Abreu, an indelible mark and struggle to forge a society in which the culture of peace prevails.

The Revolution’s commitment to El Sistema was evidenced when it managed to gather more than 12,000 of its musicians in the Patio de Honor of the Military Academy of Venezuela to interpret the Slavonic March by the Russian composer Piotr Ilich Tchaikovsky to opt for the Guinness Record of the largest orchestra in the world in November 2021.

After receiving the official document that certified Venezuela as the country with the largest orchestra in the world, the Head of State Nicolás Maduro wrote on his Twitter account “What Pride! The System of Youth and Children’s Orchestras and Choirs of Venezuela has achieved it, we are Guinness Record as the World’s Largest Orchestra. Congratulations to the more than 12 thousand musicians, to their directors. Tremendous joy they have given to our country.

He also added that “The Guinness Record achieved by El Sistema is a demonstration that Venezuela overcomes difficulties. Through our veins runs the spirit of improvement and nobility, we are an example to the world. It’s moving to live this story.”