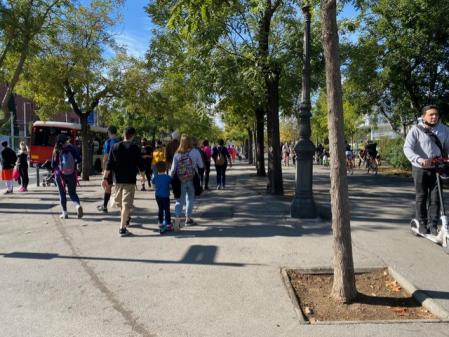 Walking is a cheap sport that quickly adapts to all physical conditions.

There are many benefits offered by practicing sports outdoors, the diversity of physical activity that we can carry out being innumerable, as well as how easy it is to practice, available to anyone, together with the positive impacts of staying in green spaces.

In general, surrounded by nature, clean air, tranquility, groups of friends and acquaintances, being able to take advantage of the sun’s rays with its much-needed vitamin D for our body, which makes it unique.

According to a recent study, carried out by researchers at the University of Essex (United Kingdom), during the first five minutes of outdoor exercise, whatever the activity, is when the greatest increase in self-esteem and improvement in mood occurs.

There are many outdoor activities, we will focus on four: Nordic Walking or outings with poles, Petanque or game of balls, gymnastic circuits and, last but not least, get active by exercising in the parks and gardens.

All of them are highly recommended mainly for senior people. They can be done in a group and that helps us to create new social relationships, by carrying out this sporting activity in the company of other people.

Nordic walking or walking with poles emerged around 1930 in Finland, when Nordic skiing Olympic participants sought an alternative to practice in summer. It is considered a very complete sport.

According to the conclusions of various scientific studies carried out both in Finland and in the United States on Nordic walking, they have shown that it is the easiest and most complete sport, with less risk of injury, since it does not cause impacts on the joints. It accumulates multiple benefits such as improving the coordination of arms and legs, strengthening the muscles in general in the arms and legs in particular, reducing body fat, strengthening the back and improving body posture.

It is possible that in the following decades it will become much more popular due to its multiple benefits for human beings.

There are more and more people who practice walking with poles, so it is not surprising that this relatively young sport in Spain has come to stay.

For its part, it is also worth mentioning the petanque. The game of balls is as old as the leisure civilization, going from Egypt to Greece, and would have been introduced to Gaul by the Romans. The balls were first made of clay, stone, wood, and finally steel.

The term comes from the Provencal Occitan words foot(s) (‘feet’) and closure(s) (‘closed’), which gave the expression “playing with closed feet”, that is, with the feet together and nailed to the ground, as opposed to the Provençal game in which the player can gain momentum.

Petanque was born from the game of Provence in 1907, during a first historical game in Provence. With the first contest in 1910, the word was made official. This happened in the ball field of a café, whose owners were named Ernest and Josep Pitiot. These two brothers immediately realized the interest of this sport, especially Ernest who began to define its rules.

Spain won the Silver medal for the men’s triplet at the 2021 World Championship, and Catalonia was proclaimed champion of Spain in the men’s category, of the honor division, for the second consecutive year in Palma de Mallorca.

It is a sport that can be played as a family as well as women and men can play together. To be able to play federated you must have a license that depends on the age of the player requesting it.

Do you want to show your photographs?

Those interested in participating in The Readers’ Photos should only write an email to the email address in our Participation section (participacion@lavanguardia.es) attaching the photograph, explaining details of how and where it was taken and providing details of the author for the signature of the image. It is important to indicate in the subject of the mail: ´Photos of the Readers´.

■ HOW CAN I PARTICIPATE IN THE LA VANGUARDIA COMMUNITY?