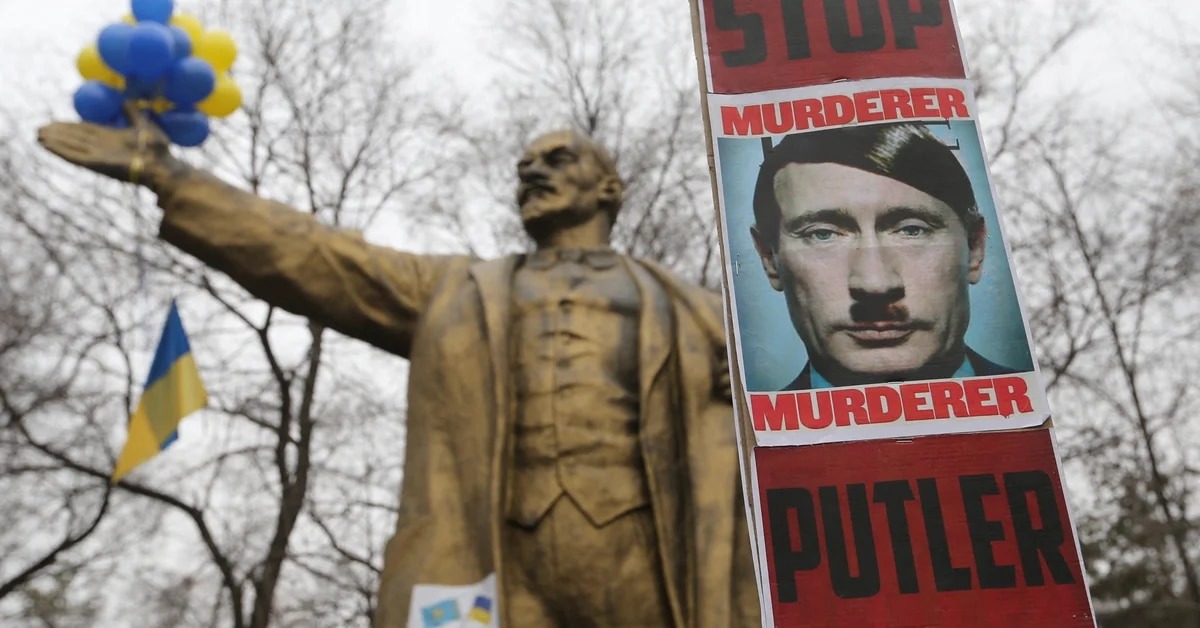 Belarusian writer Svetlana Alexievich and the peruvian Mario Vargas LlosaNobel Prize for Literature 2015 and 2010, respectively, warned against the “new Russian fascism” and the “intolerable authoritarianism” represented by Russian President Vladimir Putinin the midst of the Russian invasion of Ukraine.

“We are witnessing the birth of a new fascism”assured Alexievich, in a virtual intervention before the concentration of hundreds of people in support of Ukraine convened this Sunday in Berlin.

Vargas Llosa addressed the attendees in a recorded message, in which congratulated the “Ukrainian resistance” and called to mobilize against the invasion of Ukraine by Russia.

Svetlana Alexievich assured that, after the Russian invasion of Ukraine, “we are witnessing the birth of a new fascism” (David Levenson / Getty Images)

The concentration in solidarity with Ukraine took place in the central Bebelplatz in Berlin, next to the Staatsoper Unter den Linden -national opera- and a few blocks from the Russian embassy, ​​a place where demonstrations against the invasion take place almost daily.

In the concentration they were heard, on the auditorium or through recorded messages or by zoom, interventions of the British Timothy Garten Ashwho asked for full support for the request of the Ukrainian president, Volodimir Zelensky, to offer his country a clear perspective of joining the European Union (EU).

Other speakers, such as the singer-songwriter and former dissident in times of communist Germany Wolf Bierman They clamored to declare the no-fly zone that Zelensky claims and against what he called a “false concept of pacifism.”

The event closed with an excerpt from Zelensky’s recorded message to Europeans, followed by the Ukrainian anthem, sung on stage by the Volny choir.

The concentration in the Bebelplatz, historical place where in 1933 the Nazis burned 25,000 books by authors censored by the regimewas held a few hours after the concert directed by the Argentine-Israeli Daniel Barenboim at the Staatsoper, also in solidarity with Ukraine.

“We live in cruel times,” said the maestro as a greeting to his audience, before the choir and the Staatskapelle performed the Ukrainian anthem.

The concert was attended by the German Chancellor, Olaf Scholzand the president of the European Central Bank, Christine Lagard, sponsor of an event whose proceeds will go to the UN Fund for Ukraine.

After recalling his own family’s diaspora, arriving in Argentina fleeing the Nazi pogroms, and supporting the exclusion of artists “related” to Putin, Barenboim warned against a “witch hunt” on Russian artists and creators.

The Staatsoper, of which Barenboim has been musical director since 1992, this week canceled its contract with the Russian soprano Anna Netrebko. Thus, he joined the cascade suspension throughout Europe of the commitments with this figure, as well as with the director Valeri Guérguiev.

Netrebko and Gerguiev are notorious Putin enthusiasts. “Let’s not mix Russian culture with Russian politics,” urged Barenboim, in his call against a “generalized suspicion” about these artists.

Popular demonstrations against the war also spread to other European cities over the weekend. This Sunday, in Madrid, Barcelona and La Coruña thousands of Spaniards protested against the Russian invasionas happened on Saturday in other Spanish towns.

Some 2,000 people gathered in the Spanish capital to show support and solidarity for the Ukrainian people. Some 23,000 Ukrainians reside in Madrid, many of whom have received the support of locals who have joined the march between Plaza de España and Puerta del Sol.

Also in Barcelona (northeast), several hundred people gathered to demand that the invasion cease and that the Atlantic Alliance establish an area exclusion zone.

The rally was called by Ukrainian associations in the central Plaza de Catalunya in Barcelona, ​​where a stage decorated with the Ukrainian flag was set up, where a group of people sang the anthem of that country.

The participants also observed a minute of silence for the victims of the war conflict. Ukrainians have been congregating there every day for eleven days, when the war broke out.

Simultaneously, several dozen Russians opposed to the invasion gathered in the nearby University Square with slogans against the president of Russia, Vladimir Putin.

With information from EFE

Invasion of Ukraine LIVE: Putin’s troops attacked the plant of an experimental nuclear reactor in Kharkov
The mystery of the dead Ukrainian negotiator suspected of treason
The 3 types of oligarchs surrounding Putin