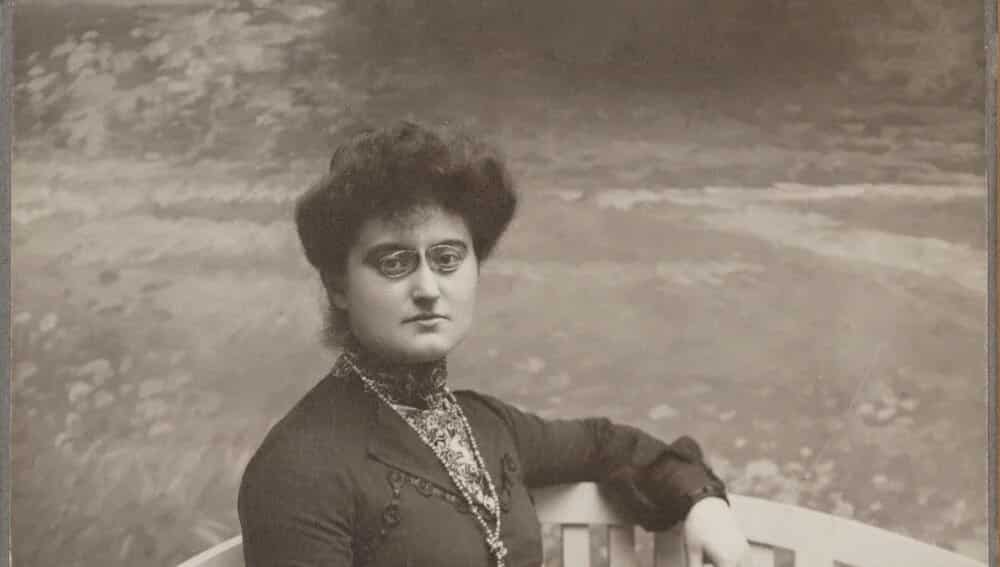 There are lives that can be summed up in a few words. Almost inconsequential lives, without fruit or memory. Some of them are unfathomable due to their intensity, their struggle, for being ahead of their time. Sometimes history has cornered them into oblivion. The former would perhaps fit in a small and simple keepsake box, the latter require something more. the of Rosika Schwimmer lay hidden in 176 biography boxes intense and long legacy. 176 chapters of life that deserved to be dusted off from the social amnesia about one of the most combative women of the early 20th century who negotiated with presidents, agreed with big businessmen and claimed the vote for women, equality and peace.

One by one, the Biscayan writer Kirmen Uribe opened them to immerse himself in that exciting biography that he had never heard of until then. How was it possible! That woman born in Budapest was what he was looking for for his next novel. None like Rosika represented the profile of the figure that had taken him and his family to New York in 2018. It has been four years opening boxes, discovering episodes of life, each one more exciting than the previous one.

The world must know her. She, that woman, had a lot of those he knew in her life, his mother, her aunts… Her life also included bits and pieces with which she identified. At archive of the new york public library there were many documented lives. Counterculture artists of the 60s, 70s, women whose walk against the current was worthy of recognition. But none like Rosika and hers 176 boxes of her.

The trip he undertook to the USA in 1921 from his native Hungary changed him forever. There was no going back. He did it like the men who, according to Basque mythology, they fell in love with the ‘lamias’, those half-woman, half-mermaid beings that enthralled them. That infatuation was cursed, it transformed them into dolphins, with no going back. It is the mythological legend that Uribe uses to describe Schwimmer’s life. He does it in his latest novel, The previous life of the dolphins (Editorial Seix Barral).

A ‘game of mirrors’

It is a work in which he intertwines historical events with his own family experience and the fascination that always accompanies Uribe’s works for Basque tradition and popular culture. “I remember that when I began to learn about her life, right after her I saw a game of mirrors between the women who have been important in my life and her,” Kirmen recalls.

It has been four years in New York delving into the history of Schwimmer to narrate it in a unique way. In her biography she found achievements, failures and claims, but not the most personal, the most intimate side: “I decided that we could give that most emotional and human part with our own experience as a family that, like her, had also moved and settled In New York”.

Uribe decided that telling only his life would have been simpler, “but I like to bet on new novelistic forms.” That’s why he resorted to the transcript formulato representations of himself, his partner and his children, to develop the story of Rosika’s life from three different perspectives: “I was interested in showing what happened in my mind when I opened the boxes, what it meant for my family to have to go to living and adapting to New York and that this would be reflected from three different points of view”.

Uribe was born in Ondarroa, a small fishing village on the Biscayan border with Guipúzcoa. His father dedicated himself to the sea. Rosika, the writer recalls, “also lived in a small town in Hungary and her father was dedicated to raising horses to sell them to the Sultan of Turkey.” Kirmen recalls his childhood in the 1980s surrounded by women “ahead of his time.” A childhood in a progressive, pacifist environment. He even declared himself rebellious as a young man and gave up his military service, for which he had to serve a year in prison. “She was also pacifist, anti-war”, he points out. Then came his march to the United States to try to stop the First World War, managing to make an appointment with President Thomas Woodrow Wilson to ask him to try to stop the war. Kirmen’s trip to the US was for other reasons, but there he also detected “a set of mirrors, of parallelism in which I felt identified.”

Rosika lived an intense life, full of aspirations that could seem utopian. A woman like her, from a Jewish family, trying to stop a world war. She did not manage to convince the president of the United States, but rather the automobile businessman, Henry Ford, so that her voice in favor of peace would be heard. She did it aboard the ‘peace ship’ en route to Europe. That defense of her for not war would earn her to be nominated on several occasions for the Nobel Peace Prize that she, like the American nationality, she never achieved.

The journey through the 176 boxes of Schwimmer’s life that Kirmen Uribe recounts in ‘La Vida Anterior de los Delfines’ awaited more surprising episodes. Like the letters he exchanged with Albert Einsteinthe keys to the McAlpin hotel where she was staying in the city of skyscrapers, the 1915 Kodak camera, the black bag she used so much, her appointment as Hungarian ambassador to Switzerland…

In the city where she died, on August 3, 1948, nothing remembers her, not a street, not a square, not a building with her name on it. Her few remaining relatives and friends come to visit her grave from time to time. Not even in the municipal library of New York where his voluminous personal file was stored, they knew the figure of who was also secretary in London of the International Alliance of Women: “In the New York library, at Columbia University they hardly knew him. She is being translated into English and I hope that she can reach more people. I am looking forward to presenting it there.”

It is the size of a matchbox or the army of toy soldiers with which Charlotte Brontë (Thronton, 1816 – Haworth, 1855) and her brothers played, and […]