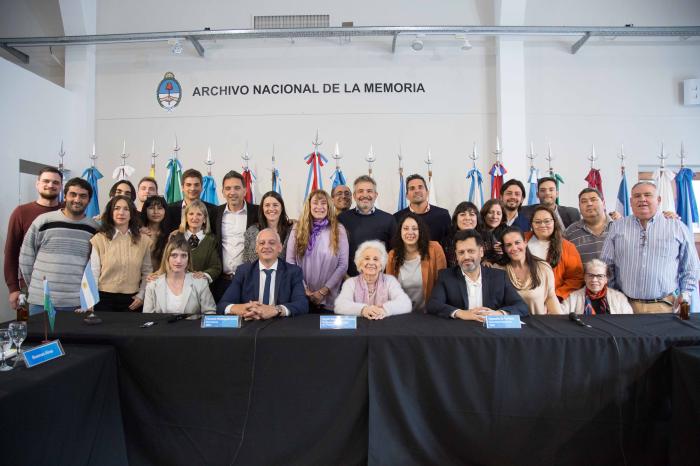 The meeting took place over two days and was attended by authorities and human rights leaders from all over the country.

The closing act took place this afternoon at the headquarters of the National Archive of Memory, in the former ESMA and was led by the secretary Horacio Pietragalla Corti, together with the head of the Grandmothers of Plaza de Mayo Association, Estela de Carlotto. They were accompanied by the executive secretary of the Federal Human Rights Council, Agustín Di Toffino, and grandmother Buscarita Roa. The event marked the end of the 36th edition of the Plenary Meeting of the Council, in which provincial human rights authorities from all over the country participated along with their technical teams. In this framework, a joint declaration of the organization was read, signed by all the delegations present.

The plenary meeting began this Wednesday morning with a few words of welcome by the Nobel Peace Prize winner and honorary president of the Argentine Peace and Justice Service, Adolfo Pérez Esquivel, who spoke about the link between democracy and human rights and the need to renew the democratic pact, repudiate hate speech and political violence. For his part, the secretary, Horacio Pietragalla Corti, thanked the representatives from all the provinces for their presence. “As Adolfo Pérez Esquivel said, we have to raise the debate and I think the Council has to be very clear based on these events that happened against our democracy,” Pietragalla said, referring to the attack suffered by Vice President Cristina Fernández de Kirchner.

“We have a lot of work ahead of us in these working days. I think we can contribute a lot from a human rights perspective, with a federal vision,” added Pietragalla, highlighting “the need to deepen coordination with the provinces to address complex problems, such as institutional violence, to advance in compliance with international human rights requirements.

The work agenda of the meeting was aimed at strengthening federal articulation in the area of ​​promotion and protection of rights, highlighting the importance of human rights indicators as inputs for the design of public policies. In addition, an exchange space was created so that the provincial representatives could share management experiences and good practices in each of their territories.

One of the outstanding activities of the first day was the presentation of the Latin American Initiative for the Identification of Disappeared Persons (ILID), which was led by Natalia Federman, executive director of the Argentine Forensic Anthropology Team (EAAF), and Virginia Urquizu, coordinator of the organization’s Case Unit.

In addition, throughout the day the different lines of work carried out by the Nation’s Human Rights Secretariat were presented. There was a presentation on international cases before the IACHR, policies against institutional violence and the need for normative adaptation of the provinces to international human rights standards. Also on the programs aimed at young people, training for the security forces, the policy of signaling Memory sites and the opening of the Integration Centers for migrants and refugees. In addition, the CoNaDI spoke about the National Program on the Right to Biological Identity, which works under its purview and has the objective of addressing the problem of the violation of the right to identity for cases not linked to crimes against humanity.

At the closing of the activities of the first day, there was a discussion table that included the participation of the Minister of Justice and Human Rights of the Nation, Martín Soria, who highlighted the commitment of the National Government in terms of human rights and particularly valued the policies public policies implemented from the Secretariat.

The director of the Human Rights Observatory of the Honorable Senate of the Nation, Martín Fresneda, was in charge of opening the second day of activities with a talk and exchange round on Federalism and regulatory adaptation.

Later, Fernanda Gil Lozano, executive director of the International Center for the Promotion of Human Rights (CIPDH-UNESCO), provided information on organizational aspects of the III World Forum on Human Rights that will take place next year in the city of Buenos Aires.

At the end of the meeting, the director of Human Rights of the Ministry of Foreign Affairs, International Trade and Worship, Cecilia Meirovich, spoke about the National Action Plan on Business and Human Rights.