Mircea Cartarescu was born in Bucharest in 1956, received his doctorate from the Faculty of Letters of the University of Bucharest, and became known among readers through the so-called Monday Cenacle. Your book The uprising, an epic poem of 7,000 lines, put him on the radar of many. He has written, in addition to poetry, essay and narrative. After that first book came, among other titles, The Roulette Player, Lulu, The beautiful foreigners, The brown eye of our love, Blindingwhich consists of two volumes, the left wing Y The body, and his famous Solenoid, which has earned him international fame. Today he is the most widely read Romanian author abroad and the most important today.

In his books, the Ceausescu dictatorship in Romania is present, directly or indirectly, but he can make both elaborate political criticism and narrate an intense love destined for the decline. His prose has a style as fine as a thin thread, although complex in itself, owner of a voice that rises with force and more than noise, what it achieves is a rumble. Each novel, each poetry, is just a small part of a whole that aims to narrate and understand the reality of a world we are sentenced to inhabit, a reality that surpasses us, that oppresses us, but from which we can no longer escape. beyond the small details that end up winning the contest, if we allow it.

He was close to visiting Colombia in 2014, but it did not materialize. It was in 2019 when the Romanian writer set foot in the country for the first time. That time, Cartarescu said that he felt Colombian. He was fascinated with the climate of Bogotá and with its people. He came on a tour with his Spanish editor, Enrique Redel, to present his entire work and meet his readers. He had never been to the country before, but from that moment, he knew that, somehow, he already knew these lands. His books had had a great reception, especially with Solenoid, a title that came to the country thanks to Siglo del Hombre Editores. On that occasion, the author made a varied tour of Bogotá’s bookstores, chatted with the press and visited several of the city’s tourist sites. He went to market places, he ate paisa tray and rib broth. He walked through the center of Bogotá and climbed the Monserrate hill. 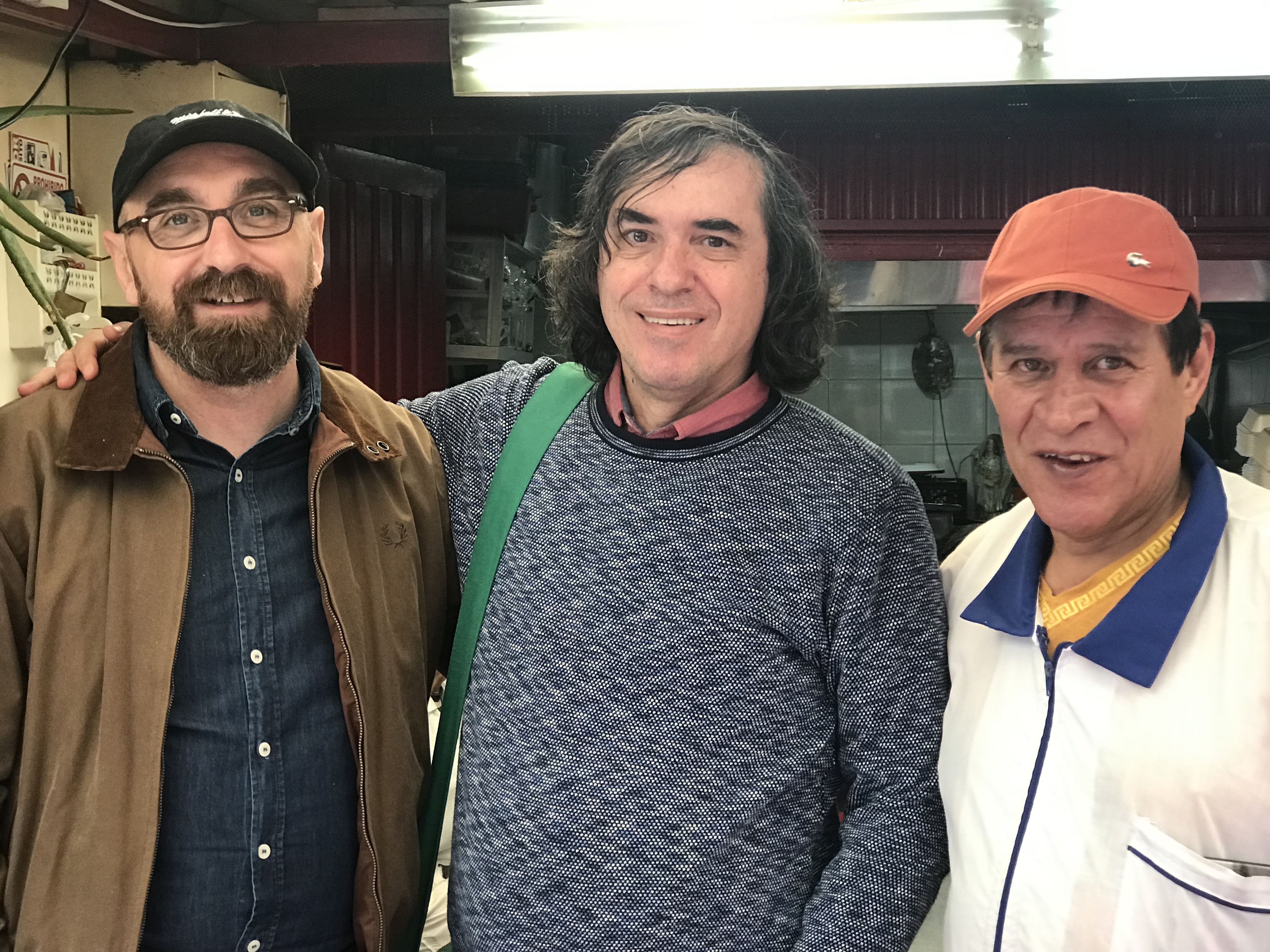 Cartarescu was fascinated by the exhibits at the Gold Museum and detailed every place he visited. At all times he felt welcomed, happy. For him, Romania and Colombia are the same nation. They not only share the colors of their football team, but also the way of living and coping with the pressures of everyday life. At last he was able to concretize what he had imagined so many times in his head after reading García Márquez. A country that is all countries. 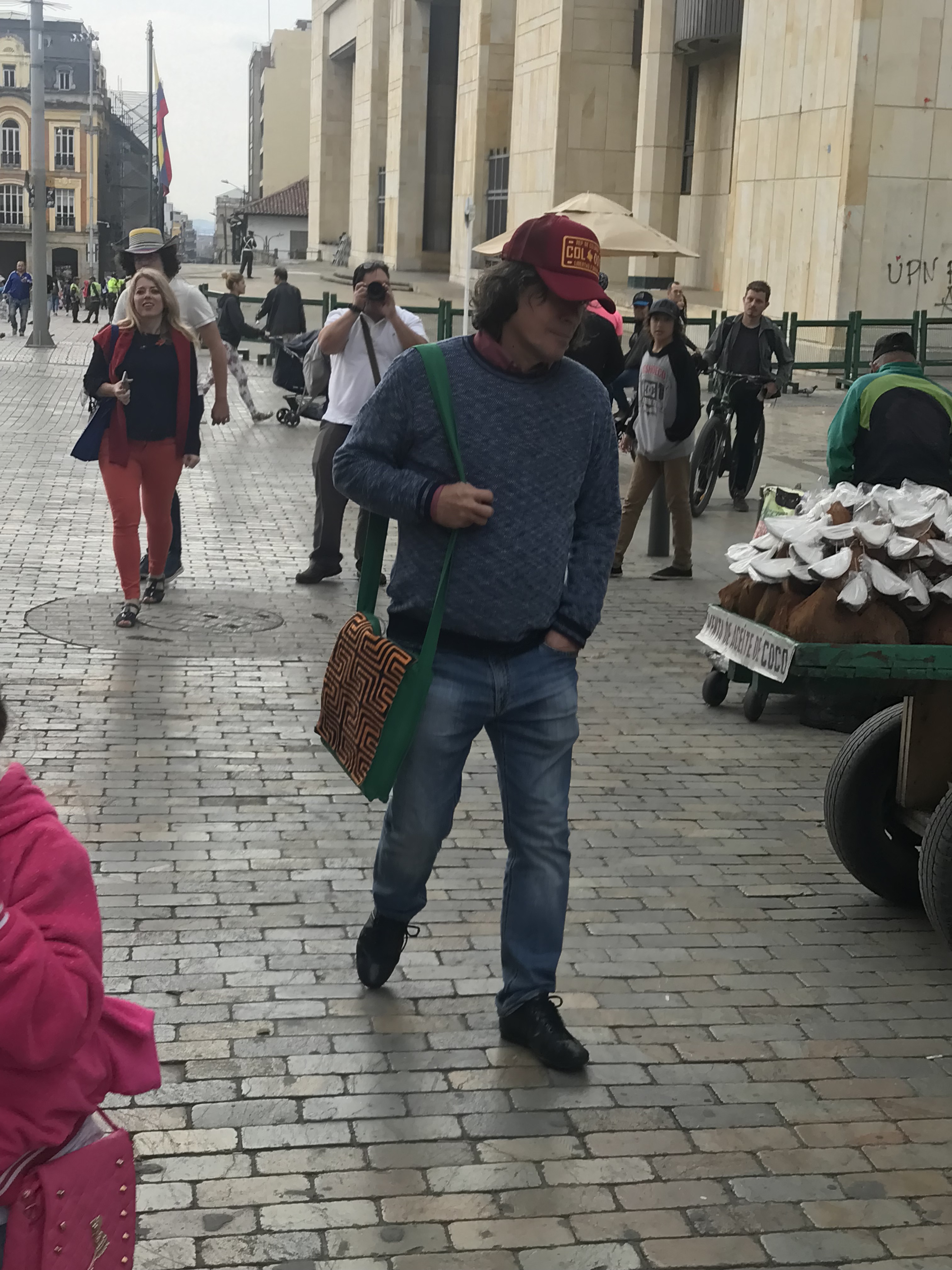 Those tours ended in the Modern Gym, with a masterful evening, in the company of Piedad Bonnett, who became one of its most enthusiastic readers and would later write the prologue of the Colombian edition of Nostalgia. The event was packed. There were a lot of people that day. Some had all their books translated into Spanish so far, in the beautiful Impedimenta editions, and others had one or two. A man even had a suitcase with magazines in which they interviewed the Romanian. It was that reception, precisely, that welcomed Cartarescu and made him feel so at home. At the end of the meeting he signed his books, for almost 40 minutes, took photos and even talked, despite the fact that he knows only one or two words in Spanish. He wanted, in a way, to thank people for their love for him.

A short time later, Cartarescu began to play more strongly in bookstores. They all wanted to read it. Some did it for fashion. Others wanted to know what was attractive in his work, beyond the awards. It is worth mentioning that he has obtained the Formentor Prize and the Romanian Writers Union Prize, among other recognitions. His work makes him, every year, be on the lists of possible candidates for the Nobel Prize for Literature. His name has sounded very strong in the last two years, especially, but the Swedish Academy has ended up leaning towards other lesser-known authors, at least in these latitudes. 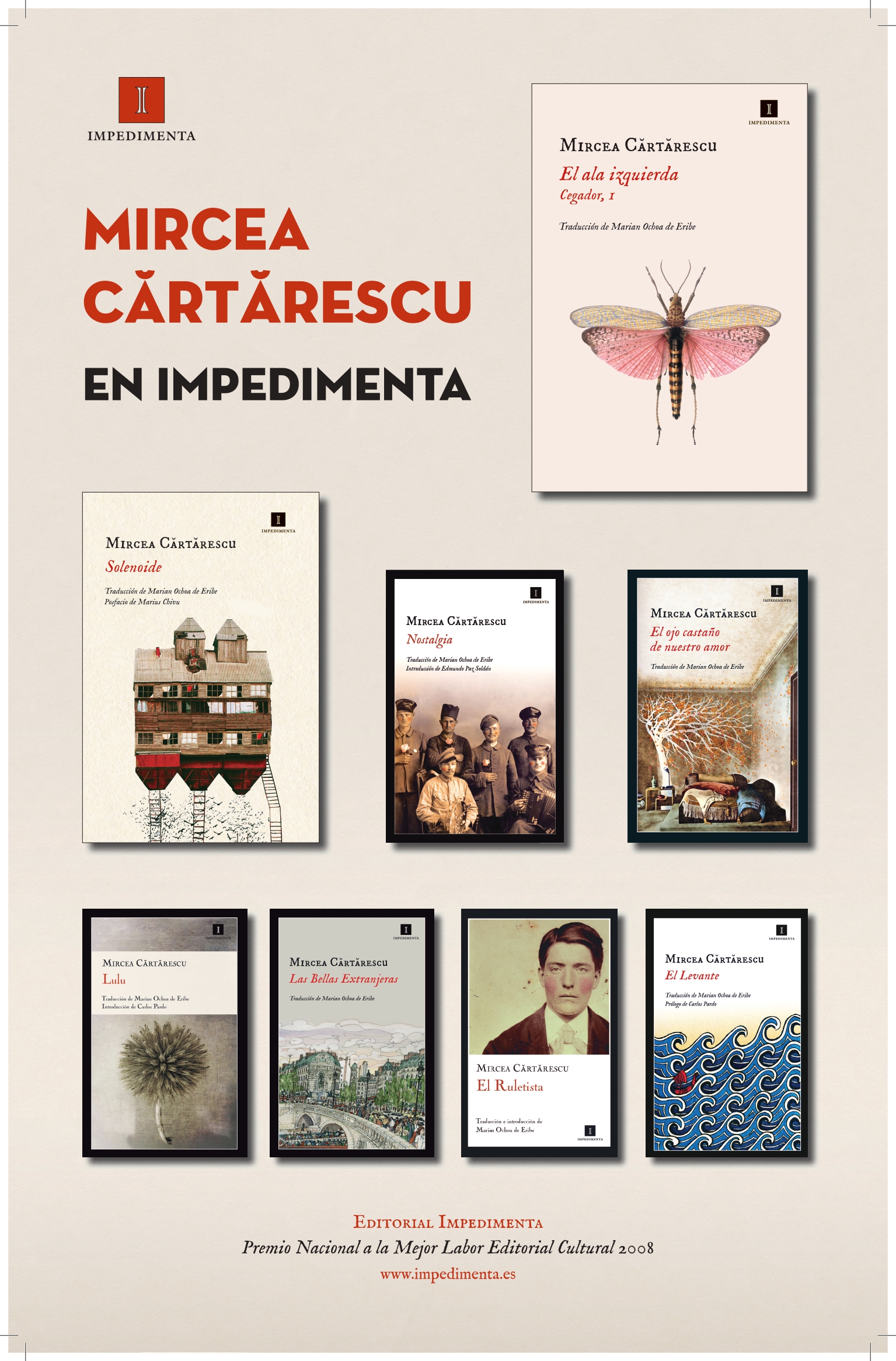 Some of the titles in Spanish that are obtained with the Impedimenta label (Courtesy: Siglo del Hombre Editores).

Redel is as important to the impact of Cartarescu’s books in Spanish-speaking countries as the author himself. We talked about what it means to edit it and what that visit to Colombia was like, almost four years ago. “Cartarescu’s visit in [ese año] It constituted a before and after in the dissemination of the work of the Romanian author in the Spanish language, there is no doubt. Colombia is Impedimenta’s second largest market in Spanish, and Cartarescu, its star author, has a large readership in this country. His visit to the Hay Festival in Cartagena to present the left wing It was very revealing for Cartarescu, but his jump to Bogotá, on a mini-tour that included meetings with journalists, with bookstores and a massive presentation with Piedad Bonnett at the Modern Gymnasium, was a real crush for him, as he has not tired of repeating. Cartarescu considers himself since then (these are his words) a Colombian writer born in the heart of Europe. Colombian sensitivity, idiosyncrasy and literature are very close to those of Cartarescu: Colombian magical realism is, for the Romanian himself, plain “realism”. Bogota’s geography, food, people: everything has to do with Cartarescu’s sensitive world, with the root of his creation. During that visit, I think a seed was planted. A seed that has germinated and that I believe will flourish during this FilBo, in a setting like that of Corferias that will accommodate a larger number of readers, who will be able to enjoy a much more “complete” Cartarescu, since we already know the further development of his trilogy Blinding with The body and his essential poetryand that a special edition of his inaugural work is published, thanks to our distributors of Siglo del Hombre, Nostalgiawith unpublished photos of the Romanian Andrei Pandele on the Bucharest of the seventies and eighties”.

I ask the editor, because the reader’s curiosity wins me, about what he considers makes the Romanian different as an author, and he answers me: “I could say that Cartarescu belongs to the race of visionary writers, like Kafka or Cortázar, Borges or, in his own way, Lem. He is not a “usual” author, he does not make conventional novels, I even doubt that in his life he has written a “novel”. In his work you cannot find a single dialogue, he writes by hand, with a motley handwriting, in notebooks in which he does not cross anything out, as if possessed, a prisoner of a creative rapture. His works have a high lyrical and allegorical charge, his material is not the characters, but memory, dreams, ruins, sex as something transcendent, childhood, the unspeakable tragedy of modern man. In this sense, I consider him to be a great almost romantic author, more than a typically realist or costumbrist. The contribution of the trilogy Blindingfrom Nostalgia or of Solenoid is definitive, because these works elevate him to the category of authors capable of capturing total, ambitious and comprehensive works, which, in the words of his Romanian editor, Gabriel Liiceanu, “after reading Cartarescu, your life is cut in two, like after reading Homer, Kant and Heidegger”. 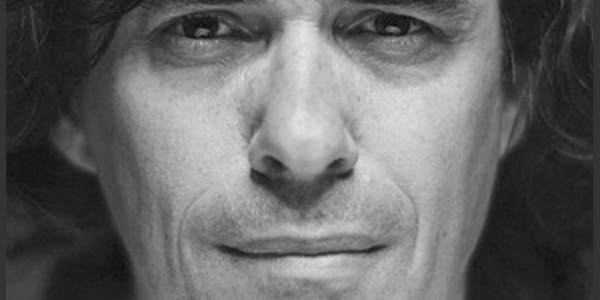 And so, the life of someone who reads this writer, the life of a reader, is never the same after the first time. I ask about what it’s like to work with him, to edit him. “Finally, after many years of working together, I already consider him a friend. I know his family, I’ve seen his son Gabriel grow up, and we talk a lot about what he writes, what his most intimate motivations are, how he wants to be read. I can say that he is one of the most generous, humble and creative guys I know. It is a luck and an honor to publish it”. Obviously I can not leave aside the subject of the Nobel. “Cartarescu, that is my opinion, he is one of the most defining authors, literary speaking, of the last decades. After reading it, the experience of reality changes completely (at least that’s my experience). When he won the Formentor Prize, some jury said that Cartarescu is capable of “expanding the field of what can be narrated”. The Nobel Prize is one of those awards that constantly haunt his biography, but he doesn’t really care about getting it or not, as he has already said in several interviews. He considers himself an author who would write even if he didn’t have a single reader, even if he were the only man on earth. The acknowledgments can come next, the purpose of his literature is to explain himself, narrate, explore and vomit his reality. The Nobel has recognized authors who, like Cartarescu, have been providential (Faulkner, Mann, Eliot, García Márquez, Hemingway, Beckett or Paz), but there are many others just as great or more, who have never received it (Joyce, Proust , Kafka, Borges). The Nobel is not the measure of the greatness of a writer, but the influence of him”.

Redel tells me that he hopes his answers will be useful to me and I can only be grateful for his conversation. Apart from being an excellent editor, whom I admire up to the neck, he has allowed me to feel closer to a tremendous author. Both, Cartarescu and Redel, will be part of this new edition of FilBo and, for sure, they will star in great meetings.

What is known about the guests at the Bogotá International Book Fair
María Paz Guerrero: feel the poetry in the bones