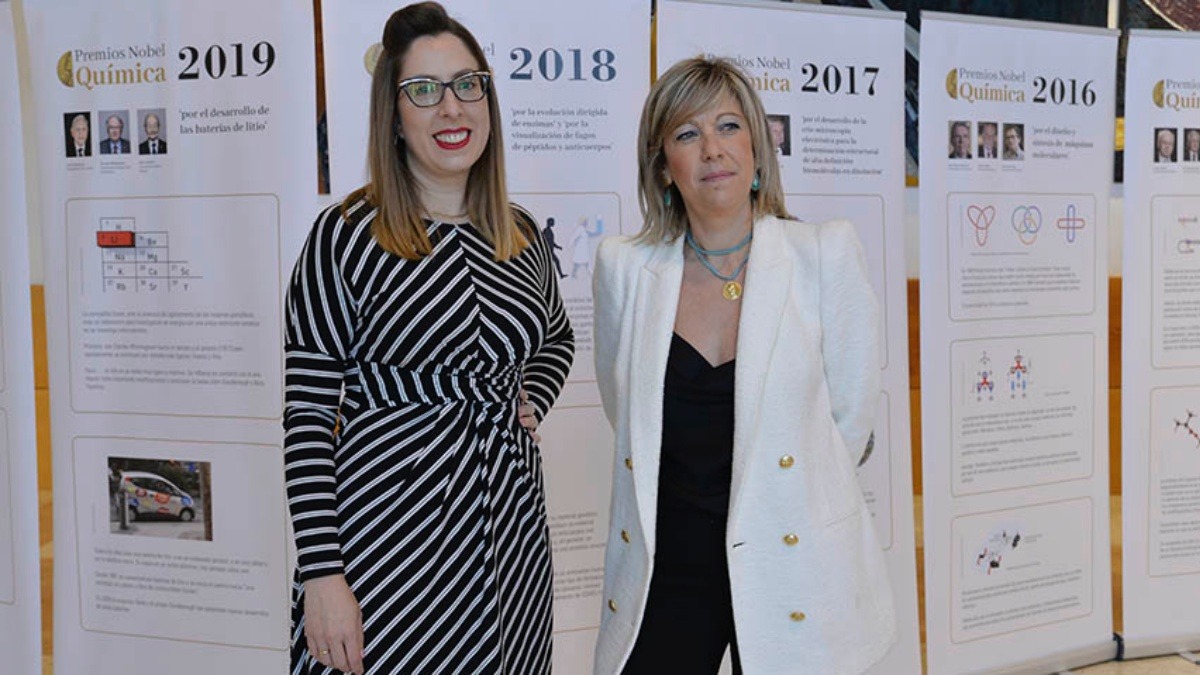 The Castilian-La Mancha territorial section of the Royal Spanish Society of Chemistry has distinguished today the professor of the University of Castilla-La Mancha (UCLM) Enrique Díez Barra with his Chemical Scientific Career Award, in recognition of his commitment to the development of chemistry in the region. During the award ceremony, which took place within the framework of the IV Chemistry Dissemination Conference held at the Ciudad Real Campus, the researcher from the Florentina Villanueva Regional University was also honored with the Prize for Scientific Dissemination in Chemistry; as well as a young researcher and another young R&D support staff for their master’s thesis, both also belonging to the academic institution.

The Professor of Organic Chemistry at the University of Castilla-La Mancha (UCLM) Enrique Díez Barra has today received the Award for Scientific Career awarded by the Castilian-La Mancha territorial section of the Royal Spanish Society of Chemistry (RSEQ). The delivery has taken place in the Campus of Ciudad Real during the course of the IV Conference on Dissemination in Chemistry, whose inauguration has been chaired by the rector of the regional University, Julián Garde; together with the president of the regional section of the RSEQ, the professor of the Regional University María Antonia Herrero; and the general director of Universities, Research and Innovation, Ricardo Cuevas.

With this award, the Royal Spanish Society of Chemistry in Castilla-La Mancha recognizes Professor Díez Barra’s commitment to the development of chemistry in the region, “contributing during his management to the increase in the budgets and infrastructures of the UCLM and to the revitalization of the PRINCET -first regional R&D&i plan-, which meant a substantial improvement in R&D in general and in chemistry in particular for the region”.

Doctor from the Complutense University, Enrique Díez Barra was dean of the Faculty of Chemical Sciences and Technologies of the Ciudad Real Campus (1985) and vice-rector of Teaching Staff and Academic Organization of the UCLM (1998); and until 2004 he was director of CICAT (predecessor center of the Regional Institute for Applied Scientific Research, IRICA) and of the Department of Inorganic, Organic and Biochemical Chemistry.

Professor Díez Barra begins his scientific activity in the line of conventional methods in chemistry: catalysis by phase transfer in the absence of solvent and microwaves in organic synthesis. Subsequently, he focuses his work on the synthesis and properties of photoluminescent dendrimers and, more recently, on the preparation of graphene derivatives, quantum dots of graphene and hydrogels.

Throughout this day, the organization that brings together chemists from Castile-La Mancha has also awarded the Scientific Dissemination Prize in Chemistry to the researcher of the Institute for Research in Combustion and Atmospheric Pollution of the UCLM Florentina Villanueva for “her remarkable disseminating work of chemistry in different media and, in particular, its activity during the COVID-19 pandemic regarding how to reduce the risk of contagion in indoor spaces”.

To these recognitions, in the 2022 edition we must add the Final Master’s Project Award, which has gone to the UCLM researcher María Asensio; the Best Doctoral Thesis Award, which went to Virginia Cuesta Gómez; and the Young Chemical Researchers Award, for the UCLM professor Ana Sousa Hervés.

With these awards, as explained by the president of the Castilian-Manchego regional section of the RSEQ, the organization intends to recognize the work of those who work in this discipline, as well as to promote a vocation for it among young pre-university students. To these, the organization directs its video contest ‘The Chemistry that surrounds us’, whose prizes have also been awarded today, together with those of the video contest ‘Sponsor your video’, open to university students with a Degree related to Chemistry; and the recognition that has been given to the students classified in the Regional Chemistry Olympiad.

Prior to the awards ceremony, an exhibition of panels on the Nobel Prizes in Chemistry of the 21st century has been inaugurated, which will reach several institutes in the province; and the intervention of the science communicator Deborah García Bello, known for her participation in television programs such as ‘Órbita Laika’ on TVE or ‘Más Vale Tarde’ on La Sexta, who gave the talk It’s all about chemistry.

García Bello has considered that “not all scientists have to know how to communicate science” and has said that “perhaps what they should do is have an expert by their side with scientific and communication training, who is capable of transferring their research”. The promoter has advised the investigators that when they receive a call from the journalist “pick up the phone and explain your dadr” and “get out of the circle of scientific friends. That way, they also learn.”