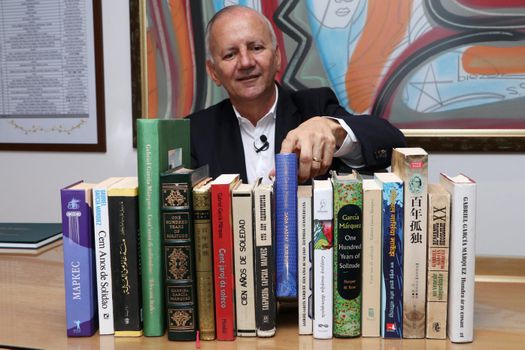 Colombian collector Jorge Salazar poses with various editions of “One Hundred Years of Solitude,” by Colombian Nobel Prize winner for Literature Gabriel García Márquez, during an interview at his home in Armenia.

Carefully organized, hundreds of books line the shelves of his private library in the city of Armenia, in homage to the greatest representative of magical realism. There are a total of 379 editions, including the first of 1967, his favorite.

“It’s my favorite because I was able to get it in Mexico with a bookseller, only 8,000 copies were made of this edition,” says the 59-year-old collector. From his house covered in books, Salazar shows the covers of the most precious copies, some illustrated with paintings by famous European artists.

He describes himself as a civil engineer, builder, “passionate” collector and admirer of García Márquez, winner of the Nobel Prize for Literature forty years ago (1982).

We suggest you read: ARTBO returns to Corferias after three years, in its 16th edition

The collector began at the age of 43 and since then he has taken advantage of each trip to expand his library dedicated to the history of the Buendía family and Macondo, the fictional town in which they lived.

Like a bloodhound, he snoops on digital platforms and travels across continents to swell a “Tower of Babel” built with the magical and peculiar world created by “Gabo”.

Although he does not have a certificate, Salazar believes he has the largest collection of “One Hundred Years of Solitude” in existence. Six months ago he wrote to those responsible for the Guinness Book of Records to be valued, but they assured him that they did not have a similar record to compare it to.

In a catalog, index each copy with the most relevant data and the image of its cover.

Each one of them has their own story and Salazar does not hesitate to mess them up in front of the cameras to share them. Between smiles, he shows a “pirate” book that García Márquez signed in China for his translator when an official version was not yet in circulation.

“Master, I allowed millions and millions of Chinese to read your majestic work,” Salazar reconstructs the plea of ​​the bold translator. According to Salazar, the writer reluctantly gave in and stamped his signature with a wink: “for the greatest pirate in the world.”

Like Salazar, Colombians pay various tributes to the Caribbean writer four decades after receiving the highest award in literature in Stockholm, when he delivered his memorable speech “The Solitude of Latin America.”

You might be interested in reading: The cinema, a refuge and a space to process the experience of war

The most famous Colombian novelist in the world, who died in Mexico City in 2014, is immortalized in each Salazar discovery. “The last book I bought was in the Faroese language, [hablado en] an island between the Scandinavian peninsula and Iceland”, says the engineer.

“For me it was impressive that on such a remote island they have ‘One Hundred Years of Solitude’ in their language,” he warns with the edition in hand.

Although a fan of his literature, Salazar distances himself from the “political” García Márquez, close to the Latin American left and a close friend of the Cuban Revolution. “I like the writer Gabo much more than the political Gabo for a simple reason: I have had the opportunity to venture into politics, I have my ideals, my principles, and that Gabo on the left close to Fidel Castro, who had conversations with some insurgent groups (…) I didn’t like it”, he concedes.

Despite the fact that the author was opposed in life to bringing “One Hundred Years of Solitude” to the screen, the Netflix platform will soon premiere the series of the work that has the approval of the García family.

If you are interested in continuing reading about El Magazín Cultural, you can enter here 🎭🎨🎻📚📖