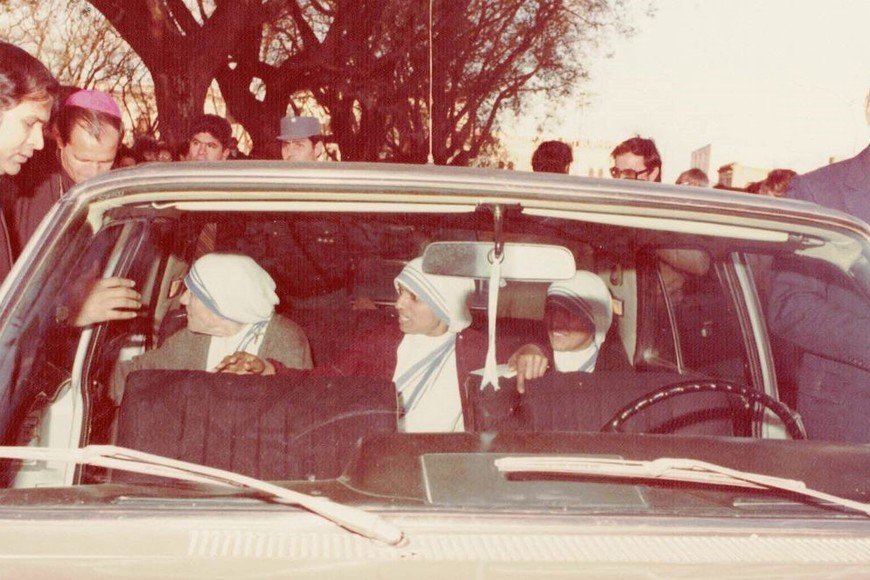 “You have to give, but give until it hurts.” If you review the 20th century, the figure of Mother Teresa of Calcutta is almost as iconic as that of the recently deceased Elizabeth II, although for very different reasons. She was born in Albania in 1910 and became a nun in 1928, she came to Calcutta to teach in a school and, moved by the living conditions of many of its inhabitants, she devoted her life to lending a hand to the underdogs As if she were a kind of female echo of Jesus Christ himself, she devoted herself especially to helping lepers, who numbered in the millions in India. She established the order of the Missionaries of Charity and her charitable work spread, like an ant trail, around the world.

In 1979, Mother Teresa won the Nobel Peace Prize and made her first trip to Argentina, a country to which she returned in 1982, following an invitation from Meny Bergel, a scientist who had been fighting leprosy for more than half a century. . On that occasion, the nun was in Santa Fe territory: after a brief stopover at the Sauce Viejo airport, she traveled to the city of Rafaela. There she participated in the inaugural ceremony of the great mission of that city, which took place in the Plaza 25 de Mayo in front of the San Rafael Cathedral. Jorge Casaretto, who in the early 1980s held the position of bishop of the Raphaelian diocese, was in charge of the mass.

“Let us give thanks that we have come together to honor the mother of Jesus, our mother. Let us ask her to give us her heart so beautiful, so pure, so immaculate. Her heart so full of love and her humility, that we are able to love Jesus as she loved him and serve him in the painful person of the poor”. Mother Teresa expressed, among other concepts. The same day that she was in Rafaela, Teresa visited Frontera, on the border with Córdoba, where she set up a house for her congregation and went through the Don Orione Home in San Francisco.

In addition to Rafaela and Sauce Viejo, he was in Frontera.

Before leaving for the west of the province, Mother Teresa of Calcutta arrived at the Sauce Viejo airport aboard the presidential plane T-01. She was received there by the Minister of Government, Fernando López Sauqué.

During her brief stay at the airport terminal, the nun had a brief exchange with the press, which El Litoral reported on its front page that afternoon. When asked about the differences he perceived in the country in relation to his previous visit, which occurred in 1979, he only replied: “That we now have two houses in Argentina”, that “there is much to do here” and that “everything that the The world needs is love.”

On the cover of El Litoral in those days.

The passing of Mother Teresa of Calcutta left us with the sensation of a truncated dialogue. But also the emotion of feeling how her mere presence transmits simplicity and love. For the boys who received her kiss, for those who shook her hand, perhaps that is more important than her word, “said the newspaper’s chronicler.

The evening paper followed in the footsteps of the honorable visitor.

Perhaps because she had always given it selflessly, Teresa of Calcutta’s heart became weak over the years. She stopped definitively on September 5, 1997. Her funeral lasted 5 hours, was broadcast on television around the world and brought together almost a million people. “If you can’t feed a hundred people, feed just one,” she once said. Her message remains valid.