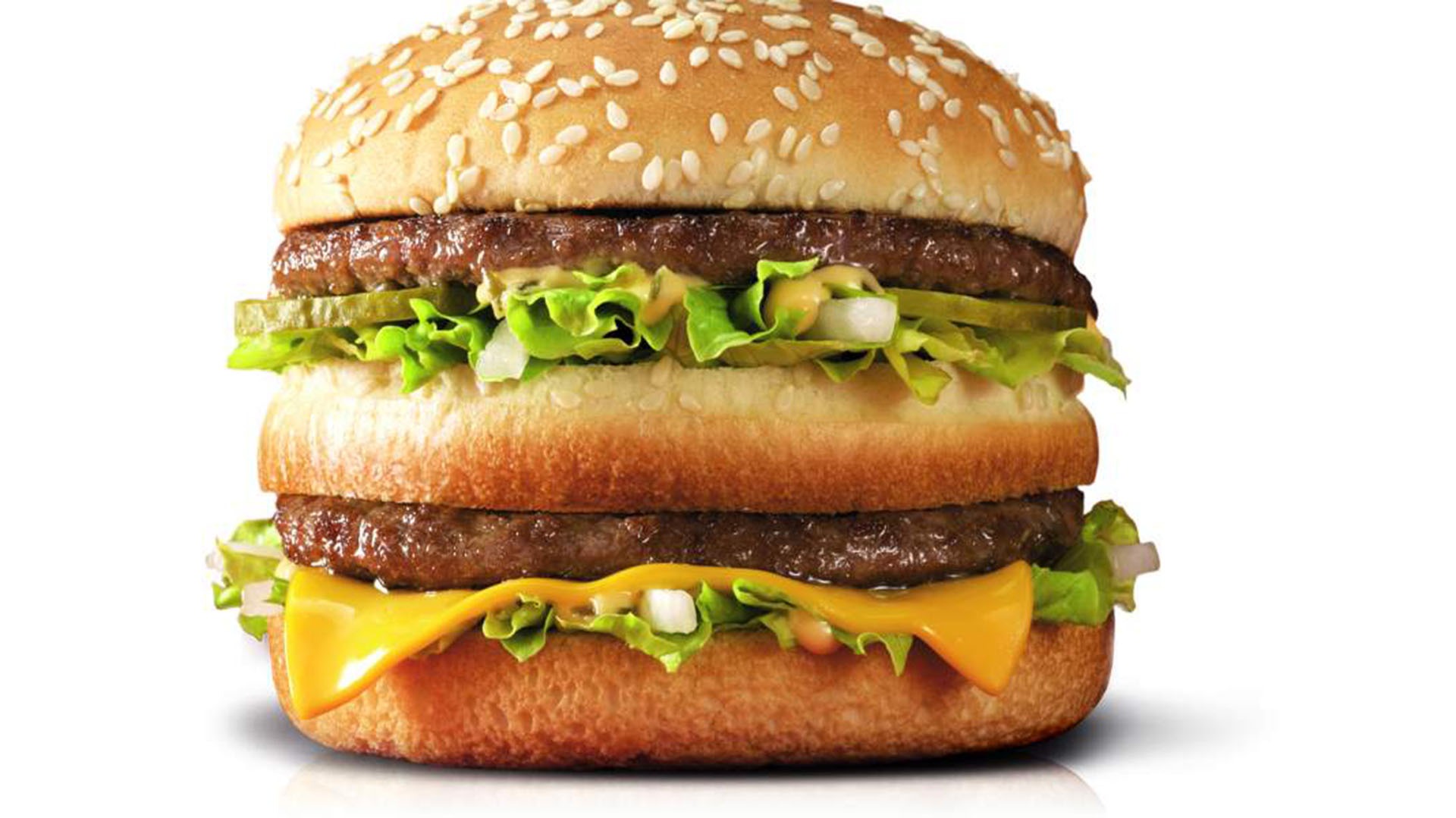 The most surprising thing is that the influential British magazine does not refer to the “blue” dollar or any of the financial variants, such as the Stock Exchange dollar (MEP) or CCL (counted with liquidation), which in recent weeks flew and closed on Friday at $338, $315 and $322 respectively. He says so with respect to the official exchange rate several days ago (at the end of the recalculation of the index, which covers dozens of countries in the world), when it was worth, by determination of the Central Bank, 129.12 pesos.

According to the Big Mac index, the dollar should instead be worth (or have been worth when it was at $129.12) only $114.56, because that is the value that equals, in dollars, the price of a Big Mac (alone, not in combo ) in Argentina, where it averages $590 according to a survey in 4 cities, with the price of a Big Mac in the US, where it costs $5.15.

The IBM is based on the “Purchasing Power Parity” theory developed in the 19th century by the Swedish economist Gustav Caselaccording to one currency is “aligned” with another if it allows the purchase of the same basket of goods at the same value, expressed in either of the two currencies. The Big Mac Index, by taking a simple good, identical in any country in the world, makes it easier to test the theory than resorting to price indices based on different consumption baskets.

What is striking is the more than counter-intuitive conclusion that the official dollar should fall in price. In part, the phenomenon is explained because in its crudest version (save the HUS!) the Big Mac Index ignores the so-called “Balassa-Samuelson effect” (by Bela BalasaHungarian economist, and paul samuelsonNobel Prize in Economics 1970) that postulates that the calculations of Purchasing Power Parity must be adjusted according to the GDP per inhabitant of the countries, since in the richest the prices of goods tend to be higher, due to their greater productivity .

Bearing this in mind, The Economist also has a “gourmet” version of the Big Mac Index, “Balasssa-Samuelson effect” included, from which it turns out that the Argentine peso would not be 11.3% “undervalued”, but slightly “overvalued”. According to the “gourmet” index, the dollar should actually cost $148.87, a price not far from the official exchange rate, but still much lower than the price of “alternative” dollars that Argentina has been able to afford.

More puzzling still is that while the Big Mac Index postulates that the Argentine peso is more or less well valued against the dollar, another article from the influential publication, on a probable new sovereign debt crisis, as a result of the rise in international interest rates, the specter of a recession and the financial situation of some emerging markets, includes Argentina among the middle-income countries most at risk of a new default. The article, entitled “The 53 fragile emerging economies” starts from the chaotic situation in Sri Lanka, where in June -he specifies- annual inflation reached 55% and in which if Ranil Wickremesingheformer Prime Minister of Gotabaya Rajapaksathe fugitive president- fails to stabilize the situation, the country “may succumb to hyperinflation and greater political chaos.”

Others can also do it, says The Economist, and points to 53 emerging economies that look more vulnerable, including Argentina, one of the 6, specifies that along with others such as Ecuador and Lebanon, it fell into default in 2020, and for the ninth time in its history. 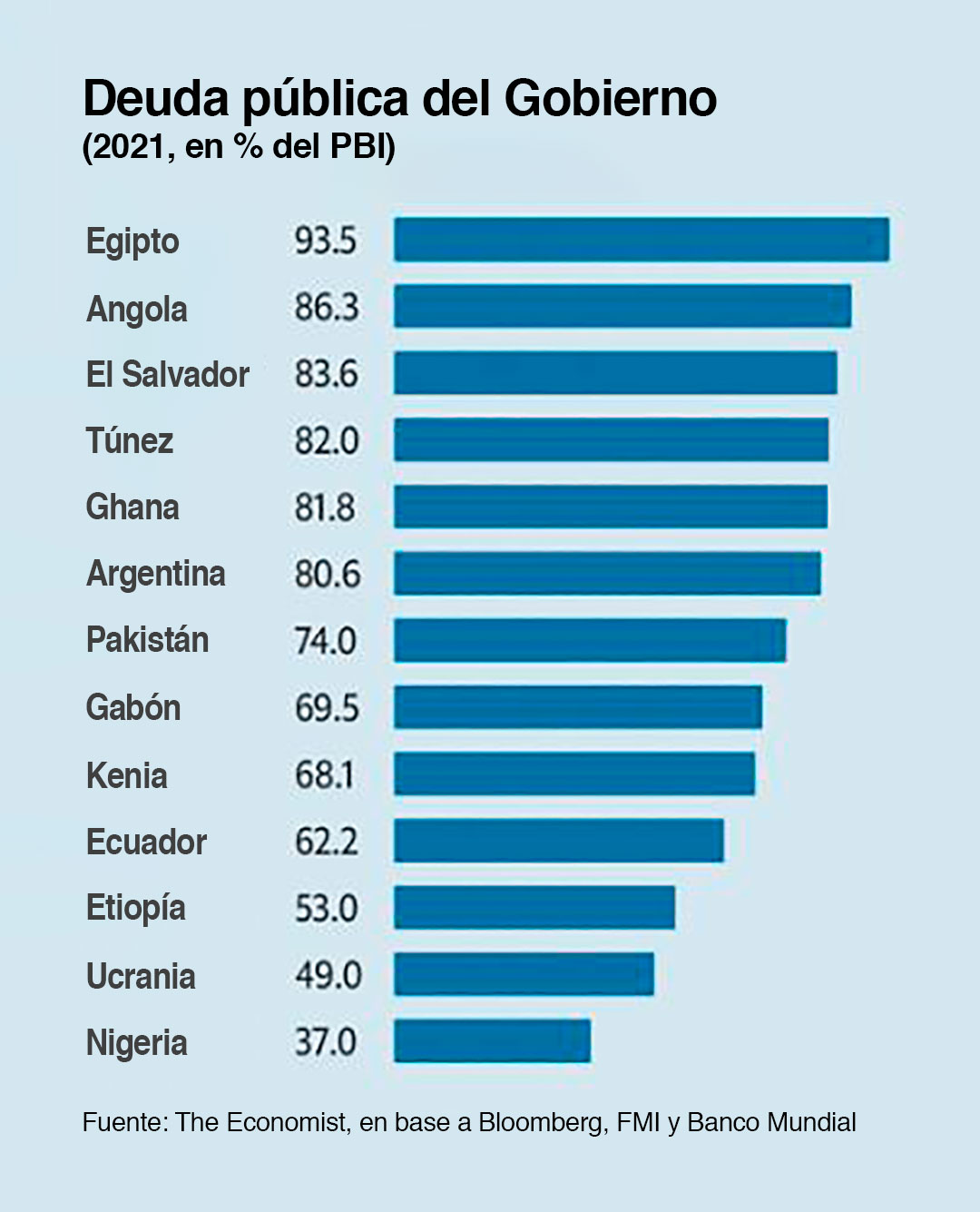 The note compares the current “grim” picture in this set of countries, mostly middle-income, with the crises of the 80s and 90s. “Then, as now – he explains – a long period of robust growth was followed by leaner times and growing debt loads, which in many cases fell off the fiscal cliff after the Mexican default of August 1982. More than three dozen countries, recalls The Economist, stopped paying and by 1990 6% of the world debt was in default.

Some things have changed since then, the article continues: Many governments have opened up to trade, liberalized their economies and pursued prudent macroeconomic policies. In fact, when the 2008 financial crisis exploded, the public debt of that group of economies averaged only 33% of GDP. It was precisely these characteristics that allowed them to finance themselves in foreign currency again, to the point that in 2019 the public debt in that same group of countries amounted to 54% of GDP.

The issue had stabilized in 2021, but the Russian invasion and the war in Ukraine, with the consequent increase in food and energy prices, is depressing the growth of several and stretching the import account to the limit, something that is it will become more acute as the central banks of developed countries raise their interest rates. In fact, according to The Economist, the federal funds rate in the US would be 3.5% at the end of the year, a projection that has already been generated by a study published by the Dallas Fed, according to which Argentina and Turkey are in a more fragile in the face of escalation, since their net reserves are not enough to cover maturities of less than one year. In addition, a recent editorial in the Financial Times newspaper stated that the Argentine economy is on the verge of “financial ruin” and that the IMF should be more demanding and “tougher” in dealing with the Argentine government. Albert Fernandez.

The war in Ukraine and the rise in food and energy prices are depressing the growth of several emerging economies and stretching the import bill to the limit, something that will worsen as central banks increase their interest rates. In fact, according to The Economist, the federal funds rate in the US would be 3.5% at the end of the year,

Two metrics from the article place Argentina in sixth place in the “fragility” ranking: the public debt as a percentage of the GDP, which according to The Economist is 80.6% of the GDP, and the spread or surcharge on the yield of the country’s bonds with respect to those of the US. In both cases, Argentina appears in sixth place. In the first, behind Egypt, Angola, El Salvador, Tunisia and Ghana. And in the second, behind Ukraine, Ethiopia, El Salvador, Tunisia and Pakistan. In the case of bond yields, in addition, the data from The Economist, look lagging, if the escalation of country risk is taken into account, which on Friday closed above 2,800 basis points according to the bank’s EMBI indicator JPMorgan.

Although he admits that middle-income countries are generally better hedged against deteriorating global conditions than they were in the past, he highlights some large countries to watch closely, such as the cases of Turkey (whose president, Recep Tayip Erdoganinsists on lowering interest rates, although at the same time it has a low public debt) and Brazil (where Jair Bolsonaro decided to relax fiscal discipline to improve its chances ahead of the October elections, in which Lula da Silva is the clear favorite), but it has a level of international reserves to reassure the markets. 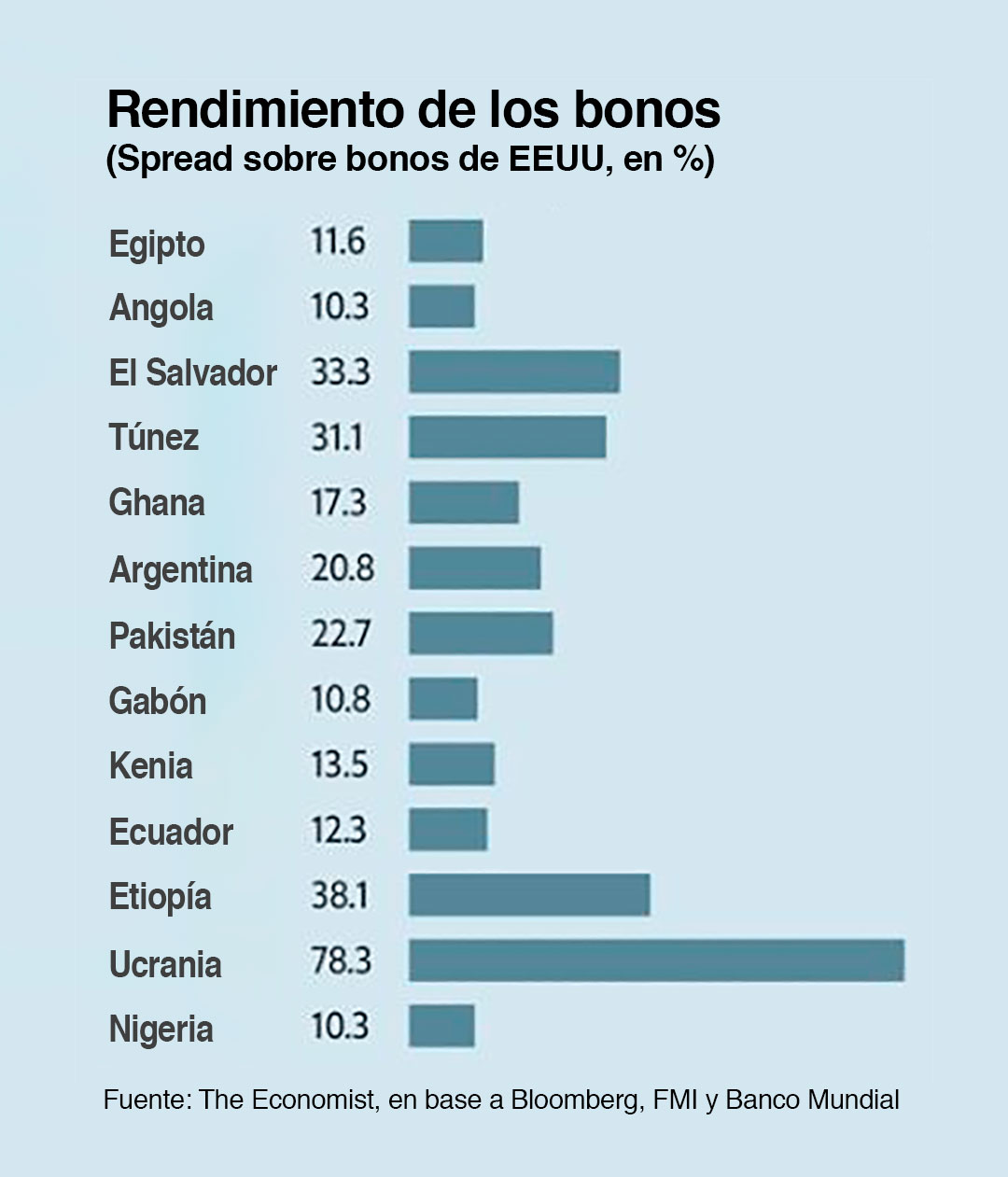 The yield of Argentine bonds appears as the sixth highest, reflecting their low price and the little confidence they inspire. With the rise in country risk in recent weeks, the Argentine position would be even worse

As a whole, The Economist points out, the “fragile 53” weigh modestly (only 5% of global GDP), but they are home to 1.4 billion people, 18% of the world’s population. Among the recipes to defuse risks, he mentions debt relief measures and a rebound in growth in China, although the latter could also cause problems by adding points to inflation and exacerbating the upward trend in interest rates.

Debt relief measures within the framework of the United Nations and organizations such as the IMF, the World Bank and the Pariah Club have so far been unsuccessful, but the situation of countries indebted to China is worse, says the study, and cites a study by economists Sebastian Horn, Christoph Trebesch and Carmen Reinhart which specifies that there are some 50 countries whose debts to China represent an average of 15% of their GDP and 40% of their foreign debt, including more than a third of the countries in serious trouble. In fact, remember the article, China is the main creditor of bankrupt Sri Lanka, which already in 2017 owed it 17% of its GDP, and of Pakistan (which owed it 9% of its GDP). However, the article says, countries are afraid to ask for relief from China, due to the harshness of the conditions.

Thus, Argentina exhibits a rare profile: according to the Big Mac Index it has an undervalued currency (or slightly overvalued, in its “gourmet” version) as if it were a strong economy, but according to the report on the “fragile 53”, it is one of the most fragile in the emerging universe and of medium or low income.

The bridge that links both phenomena is the lack of trust that means that, when measured at the parallel exchange rates of the dollar, even being “gifted”, as witnessed by the hundreds of thousands of Uruguayan and Brazilian tourists who visit the country, it continues without inspiring confidence, as reflected in the constant loss of value of the peso.

The free dollar was the catalyst for economic uncertainty and jumped 15% in the week
Inflation: due to the escalation of the free dollar and the stocks on imports, it shot up in July to more than 7 percent
How much of the devaluation of the free dollar will affect prices and translate into higher inflation, according to economists
How the investment used by savers to hedge against the rise in financial dollars yielded
The milestones of the dollar: 50 years of reactions from the governments and economy ministers in power

The disconcerting Argentine economy: according to the Big Mac index the peso is undervalued, but according to another note from The Economist the country is on the verge of default