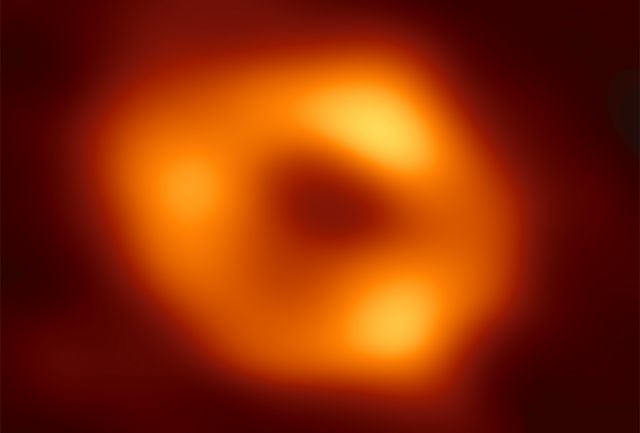 This is the first image of the monstrous black hole that inhabits the center of our galaxy.

It is known as Sagittarius A*, and has a mass four million times that of our Sun.

A central dark region, where the hole resides, is seen in the image, surrounded by light from super-hot gas that is accelerated by immense gravitational forces.

This ring is about 60 million kilometersabout the size of Mercury’s orbit around the Sun.

The supermassive monster is about 26,000 light-years away, so it poses no danger to Earth.

The image was produced by the international team of the Event Horizon Telescope (EHT).

In 2019, the EHT had published an image of the giant black hole at the heart of another galaxy called Messier 87 or M87.

That object is more than a thousand times larger, with 6.5 billion times the mass of our Sun.

“But this new image is special because it is our black hole. supermassive“, said Professor Heino Falcke, one of the researchers of the EHT project.

“It’s in ‘our backyard’, and if you want to understand black holes and how they work, this one has the answer, because we see them in intricate detail,” Falcke, from Radboud University Nijmegen, told the BBC.

What is a black hole?

At a distance of 26,000 light-years from Earth, Sagittarius A*, or Sgr A* for short, is a small prick in the sky. To detect such a target requires incredible resolution.

The trick with the EHT is a technique called very long baseline array interferometry (VLBI).

Essentially, this technique combines a network of eight widely spaced radio antennas to mimic a telescope the size of our planet.

This arrangement allows the EHT to cut an angle in the sky that is measured in arcseconds. Members of the EHT team speak of a sharpness of vision similar to being able to see a muffin on the surface of the Moon.

The way a black hole distorts light by lensing means that only a “shadow” can be seen, but the glow of matter around this darkness, which spreads out in a circle known as an accretion disk , reveals where the object is.

This image looks similar to the hole in M87, but there are key differences.

“Because Sagittarius A* is about 1,000 times smaller, its ring structure changes on time scales that are 1,000 times faster,” explained team member Dr Ziri Younsi of University College London in the UK. United.

“It’s very dynamic. The ‘hot spots’ you see in the ring move from day to day.”

The superheated excited gas, or plasma, in the ring travels around the black hole at a significant fraction of the speed of light (300,000 km/s).

The brightest regions are probably places where the material moves towards us and where its light emission is being energized.

These rapid changes in the neighborhood of Sgr A* are part of the reason why it has taken much longer to produce an image compared to M87.

Interpreting the data has been a more difficult challenge.

The telescope’s observations for both black holes were actually acquired during the same period, in early 2017, but M87, at its greatest size and distance of 55 million light-years, appears static compared to Sgr A*.

Scientists have already started implementing the measurements in the new image to test the physics we currently use to describe the black holes.

So far, what you see is fully consistent with the equations established by Einstein in his theory of gravity, general relativity.

For decades it was suspected that a supermassive black hole lives in the center of the galaxy.

What else could produce gravitational forces that accelerate nearby stars through space to speeds of up to 24,000 km/s (by comparison, our Sun zips around the galaxy at a speed of only 230 km/s)?

Interestingly, when the Nobel Prize committee honored astronomers Reinhard Genzel and Andrea Ghez with their physics prize in 2020 for their work on Sgr A*, the mention only spoke of “a supermassive compact object.”

It was a wiggle room in case some other exotic phenomenon would turn out to be the explanation.

In August, the new James Webb Super Space Telescope will set its sights on Sgr A*.

It won’t have the resolution to directly image the black hole and its accretion ring, but with its incredibly sensitive infrared instruments it will allow study of the black hole’s environment.

Astronomers will study in unprecedented detail the behavior and physics of hundreds of stars orbiting the black hole.

They will even look to see if there are any star-sized black holes in the region, and for evidence of concentrated groups of invisible matter or dark.

“Every time we have a new tool that can take a sharper picture of the universe, we go to great lengths to train it in the galactic center, and inevitably we learn something fantastic,” said Jessica Lu, a professor at the University of California, Berkeley, USA. UU., Which will lead the Webb campaign.

Now you can receive notifications from BBC World. Download the new version of our app and activate it so you don’t miss out on our best content.

The first image of Sagittarius A*, the monstrous black hole at the center of our galaxy