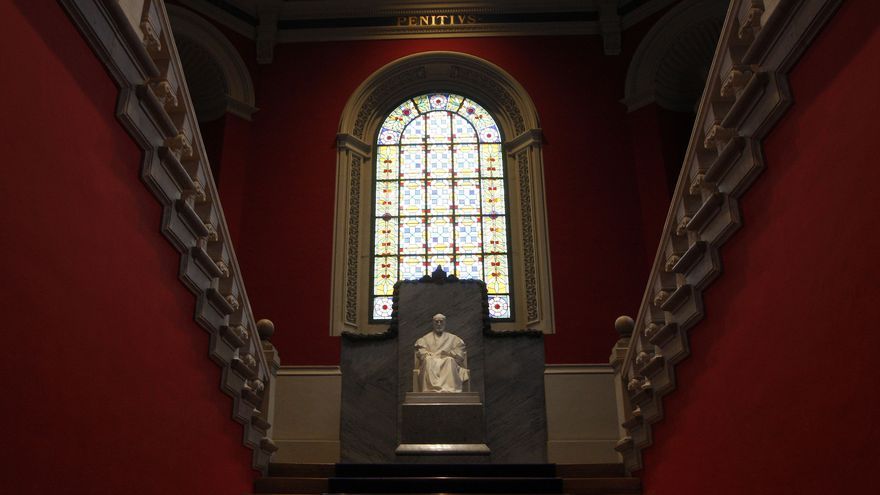 The PP and Cs team in front of the Zaragoza City Council has given the go-ahead to change of name of the Gran Vía, which from now on will be called Gran Vía de Don Santiago Ramón y Cajal. The agreement of the municipal government has come about after, a year ago, the plenary session unanimously approved this proposal, born in 2020 from civil society to honor the Aragonese scientist, who won a Nobel Prize in Medicine in 1906.

This year they meet 170 years since the birth of Ramón y Cajal and one hundred years since he retiredso it is expected that the plates of the Gran Vía will be changed as part of the commemoration of this anniversary, in which other institutions such as the Government of Aragón and the Zaragoza’s University. Precisely at the beginning of the Gran Vía is the auditorium, which was once the Faculty of Medicine where Cajal developed and spread his knowledge.

The first proposal to change the name of the Gran Vía and ‘surname’ it in honor of the scientist came in early 2020. Then, a series of institutions and personalities from Aragon signed a manifesto supporting this idea. In addition to the University of Zaragoza itself, the Government of Aragon, Ibercaja, the Labordeta Foundation, the Giménez Abad Foundation, the Royal Academy of San Luis and the Academy of Medicine also appeared on the list. There were also famous citizens like the film expert Louis Cheerfulthe former coach of Real Zaragoza Victor Fernandezthe dancer Michelangelo Bern and the scientist Alberto Jimenez Schuhmacher.

The initiative, already ratified by the municipal government, seeks to dignify the figure of the scientist Santiago Ramon y Cajal who won the Nobel Prize in recognition of his work on the structure of the nervous system. Currently, the scientist already has a street in his name in Zaragoza, located between Conde Aranda and César Augusto. The road is 370 meters long and ten meters wide and Don Santiago worked and lived there. It was the first in Spain to be named in honor of the Aragonese researcher and the intention of the consistory is that it coexist with the future name of the Gran Vía.

According to urban regulations, the streets can share a name as long as they have a different denomination and, in this case, it is fulfilled given that one is a road and the other is a street.

According to the deputy mayor, the city has “an outstanding debt” with the figure of the only Nobel Prize in Sciences that Spain has had. The liberal pointed out that it is time to “return the love that he professed for Zaragoza” and for this she recalled the words that the illustrious dedicated to the city in the newspaper The news: «Zaragoza is something of mine, very intimate, that I carry embedded in my heart and in my spirit and it throbs in my character and in my actions».

The name of the Aragonese scientist Santiago Ramón y Cajal is, after that of Miguel de Cervantes, the most repeated in the street maps of the cities and towns of Spain, with 1,176 references by the 1,629 of the writer of Don Quixote. Huesca, capital of the province in which he grew up and lived, has the longest road in honor of the Nobel Prize winner of all Spanish municipalities, with a length of 2,500 meters and a width of 30.