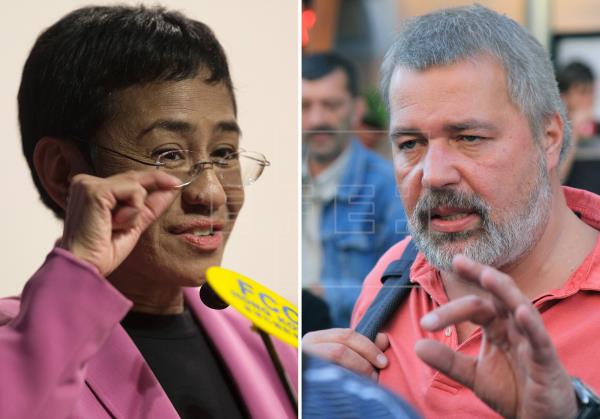 The Nobel Peace Prize awarded this Friday for the first time freedom of expression and information with an award to two journalists, the Filipino Maria Ressa and the Russian Dmitri Muratov.

Ressa and Muratov were awarded “for their efforts to defend freedom of expression, a precondition for democracy and lasting peace,” said the Nobel Committee, praising their “courageous” fight and warning of the “increasing adverse circumstances” they face. democracy and freedom of the press in the world.

The ruling highlights the need for “free, independent and fact-based” journalism that serves to protect fundamental rights against “abuse of power, lies and propaganda for war.”

“Freedom of expression is the best defense of a society against war and conflict. There is no democracy without freedom of expression,” the president of the committee, Berit Reiss-Andersen, said at a press conference after the award was announced.

Reiss-Andersen stressed that the award will not solve the problems of freedom of expression, but she was hopeful that it would direct the spotlight to the importance of journalism and how dangerous it is to exercise that right.

The winners had been on the list of Nobel applicants for years, whose pools pointed this time to a prize for press freedom, although organizations such as Reporters Without Borders (RSF) and the Committee for the Protection of Journalists appeared as better placed candidates. (CPJ).

Through especially Rappler, the digital medium that he co-founded in 2012 and runs, Ressa has exposed “the abuse of power, the use of violence and the growing authoritarianism” in the Philippines, with special attention to the controversial anti-drug campaign promoted by the Rodrigo Duterte regime, points out the ruling.

“The death toll is so high that the campaign looks like a war against the country’s own population,” the committee writes.

Ressa has also documented the use of social media to spread false news, harass opponents, and manipulate public opinion.

Almost twenty years before the birth of Rappler, the newspaper Novaya Gazeta emerged, one of whose founders was Muratov and which he has directed since 1995, making it “the most independent newspaper in Russia, with a fundamentally critical attitude towards power”, in words of the Nobel Committee.

The ruling praises the commitment to fact-based journalism and professional integrity to show aspects “rarely mentioned by other media” and to deal with issues such as corruption, police violence, illegal arrests and electoral fraud.

Novaya Gazeta’s “opponents” have responded with “harassment, threats, violence and murder,” the committee recalls, alluding to the death of six of its journalists.

“Despite the killings and killings, its editor-in-chief Muratov has refused to leave the independent line. He has consistently defended the right of journalists to write what they want about whatever they want, as long as they adhere to professional and ethical standards. “, highlights the ruling.

REACTIONS TO THE AWARD

“I cannot take the honors, it is the Novaya Gazeta award. It is for those who died while defending the right of the people to express themselves freely,” Muratov told the newspaper’s website.

The spokesman for the Russian Presidency, Dmitri Peskov, acknowledged Muratov’s “talent” and “courage” and assured that the Kremlin would congratulate the journalist.

In a video interview, Ressa assured that “the battle of facts and truth” will be won and denounced that we live in a world where “facts are debatable”, so “journalism has become activism” .

Ressa’s candidacy had been put forward by the Norwegian Labor leader and expected next prime minister, Jonas Gahr Støre, who had also jointly nominated CPJ.

Muratov and Ressa, who will share the 10 million Swedish crowns (980,000 euros, 1.1 million dollars) with which the award is endowed, succeed in the list of winners of the Nobel Peace Prize to the United Nations World Food Program (WFP) .

The Nobel Peace Prize is the only one that is awarded and delivered outside of Sweden, in Oslo, at the express wish of the creator of the prizes, the Swedish magnate Alfred Nobel (1833-1896), since in his time Norway was part of the Kingdom from Sweden.

The round of Nobel winners will end this Monday with the one on Economics.