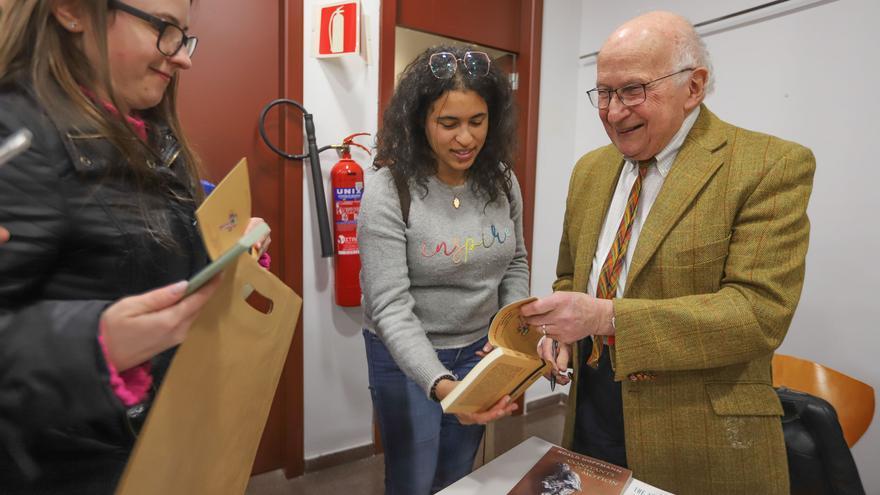 Orihuela has received this week the American Roald Hoffmann, winner of the Nobel Prize in Chemistry in 1981 and professor at Cornell University. Specifically, this Friday has visited the Miguel Hernández House Museum and the Santo Domingo school to later go to the Marqués de Arneva Palace, seat of the City Council, where he has been received by the municipal government and has signed in the City Honors Bookin which he thanked “the hospitality of your people, so full of history that it survives in the present”.

Hoffmann signs in the city’s Book of Honors Information

The reason for his visit was to present, in the Lonja auditorium, his collection of poems “Men and molecules”edited by the Oriolan publishing house Auralaria Ediciones, whose director, Álvaro Giménez explains that it is a poetic anthology, in a bilingual edition, that includes 30 poems by this chemist who has also written essays and plays.


The selection and translation from English has been carried out by Luisa Pastor, who contacted Hoffmann through his website to propose the project, something that the author immediately accepted. After a year and a half of work, in which Santiago Álvarez, Emeritus Professor of Chemistry at the University of Barcelona, ​​has also collaborated, the result is a book whose reading does not follow a rigid path, but delves into a wide variety of topics. What was originally going to be scientific poetry has ended up adding other aspects such as nature, the Holocaust -which the author experienced in his childhood-, philosophy and even the sentimental.

In addition, they include two annexes: an interview conducted by a German journalist and which reflects the scientific, philosophical and humanistic depth of Hoffmann and his speech when he received the Nobel Prize, for his work in the application of the theories of quantum mechanics to predict the course of chemical reactions .

This initiative is part of a project that the publisher has been carrying out since 2013 in collaboration with the Miguel Hernández de Orihuela Cultural Foundation and the “Miguel Hernández” Poetry Classroom, in an edition dedicated to the relationship between poetry and science.

The City Council has also collaborated in its publication through the Department of Education. The mayor María García, has indicated that from the area that she directs, they have acquired 100 copies of the collection of poems that will be distributed by the schools of the municipality.

A Nobel on the Desamparados campus

He has also given this Thursday the conference “Natural, chemical, organic and people” on the Desamparados campus of the Miguel Hernández University (UMH), in informative conferences on art and science organized by the publisher, the UMH, the Cefire de Orihuela and the Jesús Carnicer Science Didactic Museum, which have been developed at the Orihuela Higher Polytechnic School (EPSO).

The mayoress of the municipality, Carolina Gracia, has stated that “Orihuela receives this type of visits allows us to publicize things that we have and that we rarely tell”.

A publishing house with an Oriolan seal

Roald Hoffmann’s book is the third publication by Auralaria Ediciones after its first issue was published in November 2020: “The Roses End”, a collection of poems by Luisa Pastor, with which the publishing house was inaugurated, opening the poetry collection “Aledo”, as a tribute to the Oriolan painter José Aledo Sarabia. In addition to that first issue, in May 2021 she published the second volume: “The stillness”by the Oriolan poet Manuel García Pérez.

In March, the Oriolan publishing house will publish the poetic anthology “Everything Was Blue”, which includes all the stages of Miguel Hernández, with a prologue by Manuel García Pérez, professor at the IES Tháder de Orihuela.