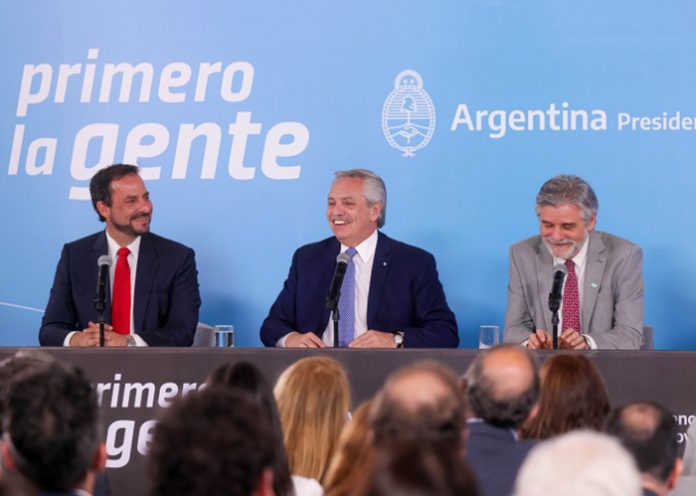 “In these times when everyone talks about adjustments, cuts, I want to tell you that in the Budget that we are going to present tonight, there will be 500,000 million pesos from Argentina to develop science and technology. That represents 0.34% that the law orders that we must allocate. We do it because we are convinced that the future is there”, stressed the president.

“Sovereignty is not a political word, it is having the ability to be autonomous and grow without depending on others. Let’s stop turning these issues into issues of disputes “

Accompanied by the Minister of Science, Technology and Innovation, Daniel Filmus, and by the Secretary of Knowledge Economy, Ariel Sujarchuk, Fernández was the main speaker at the event that took place at the Institute of Physiology, Molecular Biology and Neurosciences (IFIBYNE) .

Fernández, like those who spoke, focused on the need for State policies that provide predictability to the actors in each field, praised Argentine scientists and was in favor of public-private cooperation in the innovation area.

In several paragraphs, the president dedicated himself to recalling the decisions of Néstor Kirchner and Cristina Fernández de Kirchner to promote strategic laws and to create the Ministry of Science. Along the same lines, he recalled that the current law extends an initiative that was originally presented by the senator of the Radical Civic Union for Chaco, Víctor Zimmermann.

“Sovereignty is not a political word, it is having the ability to be autonomous and grow without depending on others. Let’s stop turning these issues into issues of dispute, ”the President concluded his speech.

For its part, Filmus also focused on the need to give continuity to the projects, and stated that none of this can be done “if you look at the electoral calendars.” In this sense, he commented that the Congress has already approved the Science Financing Law and that it has already started working on legislation that orders the destination of those funds.

While the ideas of Nobel laureate Bernardo Houssay resonated in the auditorium that “Science is not expensive, ignorance is expensive”, which had been repeated by the president of the Argentine Nanotechnology Foundation, Filmus defended public investment and stressed that that area is especially prosperous for collaboration with the private world.

While Argentina will invest 0.34% of its product in 2023 for science, “Israel invests 5%, but only 1.3 is public.” “We have no destiny if we aspire for research to come from the public sector,” he added.

Sujarchuk, in his turn, pointed to a chain of milestones, whose beginning went back to the free university dictated by Peronism and that can be traced to the creation of the Ministry of Science during the government of Cristina Fernández and the Secretariat of the Knowledge Economy during the administration of Alberto Fernandez.

Regarding the new law, Sujarchuck commented that it extends the original benefits until 2034 and formally incorporates the idea of ​​nanotechnology. “In 12, 13 years, we will remember this day as indelible for the growth of science, of bio and nanotechnology,” he added.
In addition, he announced that a Necessity and Urgency Decree is being studied so that companies in the sector “that increase exports have an exchange advantage.”

The law was approved on September 1 by the Senate and was one of the regulations requested by the Minister of Economy, Sergio Massa, after his assumption of office on August 3 last.

The project allows those who access the promotion regime to obtain benefits of accelerated amortization of the Income Tax in one installment, early return of VAT and the granting of a tax credit bonus corresponding to 50% of the expenses paid for hiring of research and development services with institutions of the National Public System of Science, Technology and Innovation.

According to data from the Ministry, there are 220 consolidated companies in Argentina and more than 100 startups (companies). The turnover is 2,100 million dollars and 220 million dollars in exports.

Likewise, there are more than 2,800 researchers and fellows in 71 institutes, and there are 73 sector-sector articulation companies through the Argentine Nanotechnology Foundation.