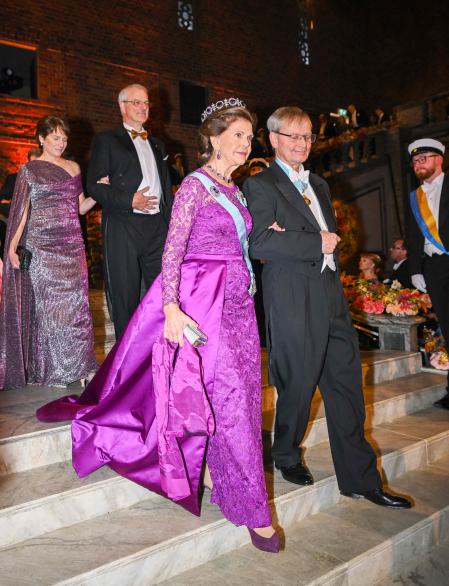 December 10 was a day marked in red on the Swedish Royal Family calendar because the Nobel Prizes were awarded. After two years marked by the coronavirus crisis, Stockholm has regained its splendor and The Royal House of Sweden has experienced one of its most magical nights. King Carlos Gustavo, Queen Silvia, Crown Princess Victoria, Prince Daniel Westling, Prince Carlos Felipe and Princess Sofía have gathered at the country’s famous Concert Hall and have dazzled with their handsome appearances. Above all, they have done it, leaving everyone present speechless with their dresses and jewelry.

King Carlos Gustavo, at 76 years old, took the reins of this act, presenting these prestigious awards, and he did it with a tuxedo and a white bow tie. In addition, the sovereign wore his most precious brooches, such as the Star of the Order of the Seraphim and the Order of the Pole Star. However, the great role was taken by Queen Silvia, 78 years old. The sovereign wore a spectacular purple dress, with a straight skirt, long sleeves and a very flattering lace pattern. The most striking thing about her look is the voluminous tail that came out of her waist. As a complement, she opted for a tiara, a necklace and amethyst earrings.

Those who also caught the attention of Princess Victoria, as well as Princess Sofia. The heiress also turned heads, rocking a stunning Camilla Thulin signature pink look. The highlight of her dress is the gathered bodice, a detail with which the garment fits perfectly to her body. Daniel Westling’s wife, 49, has proudly worn a six-button tiara and diamond jewelry.

Princess Sofía, wife of Carlos Felipe of Sweden, also shone with her own light. After turning 36 this week, Princess Silvia attended the ceremony with a smile on her face. Her dress drew a lot of attention for its flowing skirt and semi-transparent sleeves. For this very special occasion, the young woman made use of the tiara that her in-laws gave her before her wedding with Victoria’s brother. A highly valued piece and with which she has already been seen on numerous occasions. Undoubtedly, the tiaras were something essential during yesterday’s gala.

The Norwegian Royal House, another protagonist in the Nobel 2022

While in Stockholm this great event was lived with enthusiasm, in Oslo the Norwegian Royal House also dressed up to award the Nobel Peace Prize 2022. The prize has been awarded to the Center for Civil Liberties of Ukraine, to the NGO Russian human rights Memorial (already dismantled) and the activist Ales Bialiatski, currently imprisoned, for which reason this award had to be collected by Natalia Pinchuk, on behalf of the Belarusian.

King Harald, Queen Sonia, Prince Haakon and Princess Mette-Marit were the undisputed stars of the night, only with the permission of the winners. Marta Luisa’s sister-in-law could not hold back her tears at this event marked by the war that Ukraine continues to wage against Russia, and which has sown so much destruction during these ten months.

Mette-Marit reappeared radiant after fighting a battle against her disease, pulmonary fibrosis. Due to this ailment, the 49-year-old princess has had to take extreme care of her and leave some events. “I get exhausted much faster than before, so I have to take better care of myself. Now I can go for walks and have more time to read. Life has slowed down. I am very conscious of my state of health, but I don’t want it to be paid attention to. too much attention,” he recently stated.

The Royal House of Sweden dazzles at the 2022 Nobel Prizes