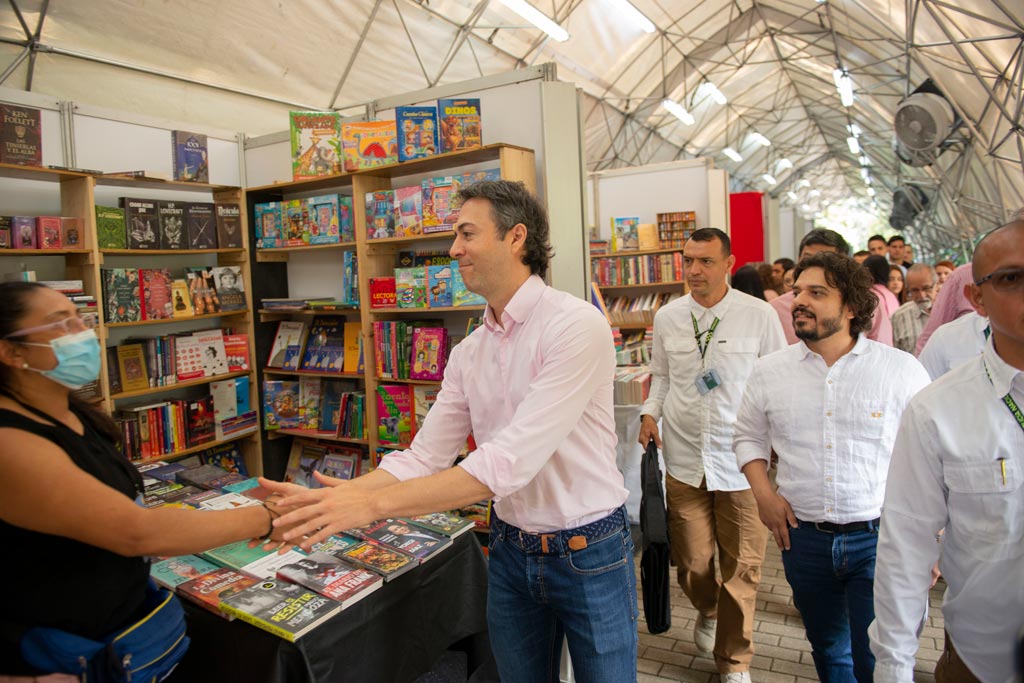 This Friday began one of the most beloved events in the city: the sixteenth Book and Culture Festival, which takes place in the Botanical Garden and North Carabobo until September 18. The opening was in charge of the Minister of Culture, Patricia Ariza; the ambassador of Portugal, Catarina Arruda (country guest of honor at this edition of the party) and the mayor of Medellín, Daniel Quintero Calle.

“This is a festival that has something wonderful and it is free, that is a very powerful message that Medellín has maintained since the Book Festival was born. It is a democratic space in which any citizen can enter and find this wonderful thing that is a book, orality, a concert and everything that happens in the celebration of the word as a mechanism to communicate, understand, communicate and reach the peace”said the local president.

In its purpose of strengthening the Book and Culture Festival, the Science, Technology and Innovation District has invested more than $7,500 million, in addition to reaching commercial agreements for more than $800 million with partners from the public and private sectors, through the Bureau Medellín, which seeks to consolidate the city as a strategic destination for tourism and major cultural and artistic events.

“I am very excited to be here in Medellín, at the Book Festival. I want to greet, especially, the authors and, fundamentally, the authors who have written all the books, who are here, who are protagonists in this Book Festival. So, I invite all the people of Medellín to attend this party, which has Portugal as a special guest, the country of the Revolution of the Codes and the country of Saramago”expressed the Minister of Culture, Patricia Ariza.

The presence of Portugal as one of the great protagonists of the Book and Culture Festival, marks for Medellín and Colombia the ties of brotherhood with the European country, which will have a participation made up of talks, exhibitions, book launches and musical shows in the platform of Carabobo. Likewise, there will be the visit of Pilar del Río, president of the José Saramago Foundation and wife of the writer and Nobel Prize winner for Literature.

“These days, Medellin will have a very complete delegation of authors and artists to publicize the culture of my country, some of them are already known and have been translated and edited here, others arrive for the first time eager to meet the Colombian readers. In addition to the festival of literature, we bring several exhibitions, our Nobel Prize winner José Saramago, whose 100 years of birth are being celebrated, but also photography, illustration and music”stated Catarina Arruda, Ambassador of Portugal in Colombia.

The purpose of the Book and Culture Festival is to strengthen the Citizen Plan for Reading, Writing and Orality, which was implemented as a Municipal Agreement in 2010, and to promote local economic development through culture.

“We are very excited that it is time to imagine, the time to imagine a world in which through literature, words, writing we can build a new city, a new country. For this reason, this Book and Culture Festival fills us with emotion where more than 350,000 people are going to visit us”assured the secretary of Citizen Culture, Álvaro Narváez Díaz.

Learn about the schedule here: https://2022.fiestadellibroylacultura.com/wp-content/uploads/2022/09/ProgramacionFiestalibroActualizada04-09.pdf

For the first time there will be the Self-Publication Hall, a new space for groups and people who have written, folded paper, drawn or alternatively sold their products.

“This weekend we have guests like Camilo Sosa Villada, the Argentine writer from Las Malas, we are also going to have well-known writers, we have Juan Gabriel Vásquez. We are going to have the writer and director Paco Taibo, from the Center for Economic Culture”said the director of Book Events, Ana Piedad Jaramillo.

This event will have 33 food stalls, including the restaurants of the Botanical Garden, so that small and medium entrepreneurs can sell their products and have a positive impact on their businesses. In addition, sales of close to $200 million in food and beverages are expected in the ten days of this edition.

All the dependencies of the District participate in the contest. The Secretariat of Security and Coexistence, in coordination with the Metropolitan Police, has prioritized attention, monitoring and uniformed presence in the sectors where the event takes place to guarantee the tranquility of the attendees. There will be video surveillance system devices with which the area is enabled 24 hours a day.

For its part, the Ministry of Mobility provides the following recommendations to improve mobility during the Book Festival:

Until September 19, the closure of Carrera 52, Carabobo, from Calle 77 to Calle 73, will be presented between 9:00 am and 10:00 pm For people who move in this area, heading north -South, it is recommended to take the detour at Calle 71 to Carrera 53, arriving at the intersection of Calle 73, to take Carrera 52 again.

Users who wish to continue their journey south-north along the eastern road from Carrera 53, Railway, must make a detour at Calle 73 until they reach the intersection of Carrera 51, Bolívar, to reach 80th Street, where you finally take this in an east-west direction, to join the usual route again.

All activities, slots and scenarios will be available at 2022.fiestadellibroylacultura.com.

Book Events is a project of the Medellín Mayor’s Office, operated by the Pilot Public Library, which promotes citizen encounters to celebrate the word in its different forms and is part of the Citizen Plan for Reading, Writing and Orality.

The “Time to imagine” begins with books, stories and dreams in the 16th edition of the Book and Culture Festival » Al Poniente