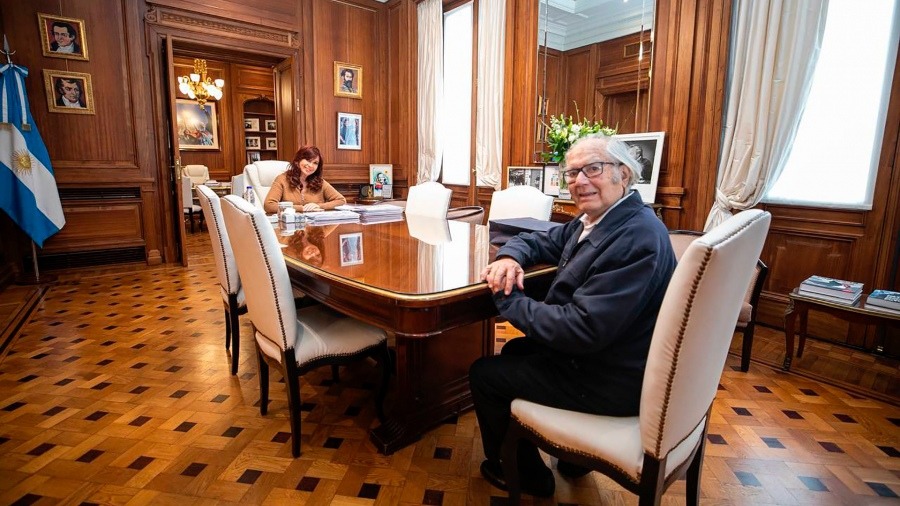 Vice President Cristina Fernández de Kirchner received this Thursday in her Senate office the Nobel Peace Prize winner, Adolfo Pérez Esquivel, who expressed his solidarity and rejection of the complaints against him in the case for irregularities in public works.

The official reported on the meeting through her Twitter account, in a text that she accompanied with a photograph together with Pérez Esquivel in her office.

“Today, with Adolfo Pérez Esquivel, Nobel Peace Prize winner. Thank you for your solidarity”he wrote minutes before the start of the special session of the Senate.

For his part, Pérez Esquivel indicated that he met with the Vice President to offer her his “solidarity and support.”

“Cristina is supported by thousands of people not only in the country but also internationally,” the Nobel Peace Prize winner said in statements made to El Destape.

In this line, the professor awarded in 1980 for his fight for human rights, highlighted that “they want to apply a soft blow” to the Vice President to “get her out of the way“, as happened with other Latin American leaders such as “Emanuel Zelaya (Honduras), Lula Da Silva and Dilma Rousseff (both from Brazil), Evo Morales (Bolivia) and Rafael Correa (Ecuador)”.

In addition, Pérez Esquivel highlighted that there is “judicial complicity between prosecutors and judges with the macrismo” and called for a “profound judicial reform.”

“It is a complacent political justice with interests that have nothing to do with democracy,” stressed the Nobel Peace Prize winner.

This meeting between the Vice President and Pérez Esquivel takes place within the framework of a series of demonstrations in their support since Monday the 22nd, after the prosecutor Diego Luciani requested a sentence of 12 years in prison and disqualification for life from holding public office. for the Vice President in the trial of the public work in Santa Cruz.

Fernández de Kirchner called a special session on Wednesday for this Thursday to discuss projects requested by the Minister of Economy, Sergio Massa, linked to promotions in the automotive and biotechnology sectors.

Athletes from the popular field led by the former volleyball player Jon Uriarte expressed their support for Cristina Fernández de Kirchner and assured that the sector is “standing up, in defense” of the former president, against the request for a sentence of 12 years in prison and disqualification from holding public office requested by prosecutors Diego Luciani and Sergio Mola in the framework of the trial for public works in Santa Cruz.

“The popular field sport is standing up in defense of Cristina,” said Uriarte, winner of the bronze medal at the Seoul ’88 Olympic Games and founder of the political organization Voleibolistas del Campo Popular, who met last night with pro-government legislators in the “Néstor Kirchner Youth Hall”, located on the third floor of the Legislative Palace.

In this sense, Uriarte argued that, “When the right comes for Cristina, they are defending a country model for the few that leaves half of Argentines out of any development project, where the State renounces the attempt to guarantee equal opportunities and does not dare to dismantle privileges “.

In addition, the coach of the Argentine volleyball team between 2005 and 2008, stated that high performance also supports those who “in 2009 made the political decision to create the National High Performance Sports Entity (Enard), a mixed management entity with economic autonomy With the rate of 1% on cell phone subscriptions, it provided Enard with economic predictability, an essential platform for sports planning in four-year Olympic cycles.”

“A few years after being launched, with unanimity in the opinion of all the actors, the Enard is shown as an extraordinary qualitative leap for the sport of Argentina, the most important strategic decision in public policies in decades. To be exact, you have to go back to the first Peronist government to find in the Evita Games and the support for athletes a policy with a similar impact.“, Uriarte said, while criticizing the policies of macrismo.

The meeting in which the group of athletes led by Uriarte expressed their support for the former president took place on Wednesday night in the Lower House, with the participation of the Buenos Aires legislator Claudio Morresi; the national deputies Gisela Marchiotta Y Magali Mastaler; the director of Social Sports of the province of Buenos Aires, Mark Cianni; Y Romina Cuevasof Volleyball Players of the Popular Field (VdCP).