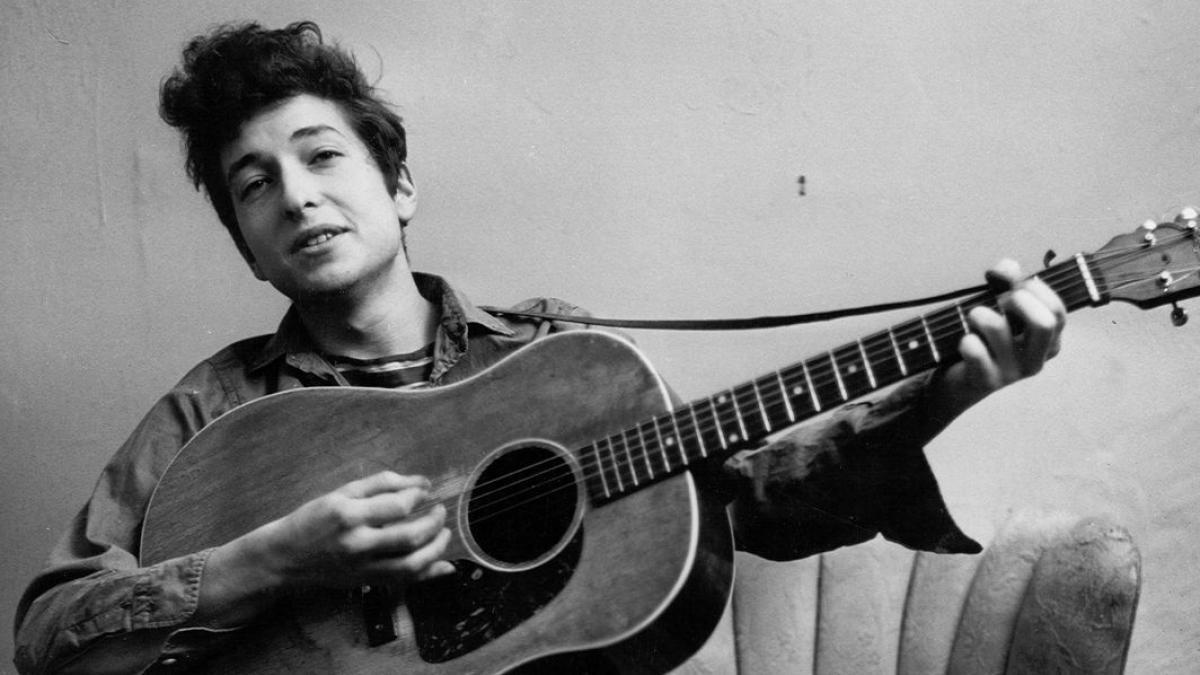 There are trips whose starting point is known, but even the protagonist does not know where the route will lead.

Not even the most audacious gamblers in Las Vegas would have given a penny if someone had told them that this disheveled young man (later it turned out that he bet), with matted hair, a hunting voice and a folk troubadour would leave from New York to reach, after more than half a century, no less than the Nobel Prize for Literature, in 2016.

Such a chimera would have been seen! Professional gamblers and parlor aesthetes would then exclaim.

Robert Allen Zimmerman was born on May 24, 1941 in Duluth, Minnesota, and grew up in the town of Hibbing. In 1959 he enrolled at the University of Minnesota, in Minneapolis.

He left in December 1960. Until then the existence of Robert or Bobby is counted.

Bob Dylan, his alter ego, was born in the New York Village, in lower Manhattan, in a cold month of January 1961. For this new birth, he had few clothes packed in a suitcase, a guitar, the harmonica, a few dollars and the dream of meeting his myth, Woody Guthrie. Arlo, son of the myth, described him like this when he met him: “A guy with the look of a tramp, strange shoes and a crazy hairstyle.”

“I thought I had no past,” Dylan boasted years later as he recalled the beginning of that journey to global success.

“Hungry for experience, he reinvented himself as the reincarnation of Woody Guthrie, his spiritual father,” writes June Skinner Sawyers in her recently published book B ob Dylan’s New York , an expanded and updated edition of the 2011 version. “It was in the Village that Bobby Zimmerman would become the Bob Dylan we know today,” he stresses. Or “as a Woody Guthrie impersonator he became a rock music icon,” he adds.

In his cradle in the Village, the historic neighborhood of American bohemia, there is no monument dedicated to him, although there are traces –metaphorical and physical– that perpetuate him. And images remain that remind him. One of these places is the Waverly Inn, a restaurant opened in 1919, a refuge for artists at the time, located not far from the apartment of the musician Dave Van Ronk, who welcomed the newcomer, one of those who lent him the sofa to sleep, couch surfing before this practice was baptized.

The Waverly dining room is packed tonight. One of the diners kindly steps aside to facilitate the photo.

– I had not noticed.

The musician is part of a collection of 43 celebrities – he appears alongside Jack Kerouac, Norman Mailer, Thelonious Monk Eleanor Roosevelt or Emma Goldman – made by the illustrator Edward Sorel. Dylan has the image of a fallen angel with a frown, curly hair and a cigarette dangling from the corner of his mouth.

He is also present, alongside George Harrison and Joan Baez, in the mural by Rico Fonseca on the facade of the Groove club in MacDougal, a key street in the reception that the city gave him.

As soon as he entered Manhattan, Sawyers says, the young musician parked his Chevrolet Impala and headed to Cafe Wha?, a former horse stable and popular music joint that is still in business with daily concerts.

Once in that place, he asked the owner, Manny Roth, if he could act. The daytime show corresponded to the singer-songwriter Fred Neil, known from 1969 for his theme Everybody’s Talkin’ from the movie soundtrack midnight cowboy . “He couldn’t have been nicer,” recalls Dylan. He accompanied Neil on his harmonica.

A modest beginning, but that is to arrive and kiss the saint.

“New York is completely crucial in his career,” underlines Michael Gray, author of The Bob Dylan Encyclopedia compendium of articles covering the life and work of the author of Like a Rolling Stone . “It can be said that if he had kindergarten in Hibbing and in Dinkytown (an enclave adjacent to the Minnesota university campus), his real education took place in New York. And, in turn, he brought something new to the city and it spread quickly,” he adds.

New York is completely crucial in his career.”


He was 19 years old and was soon known in Greenwich Village. What did Dylan welcome? asks Sawyers. It depended on his imagination. Because sometimes he said he was an orphan from New Mexico, sometimes that he had grown up in various orphanages, that his ancestors were Sioux, or gamblers or thieves or both, that he had lived in Oklahoma, Iowa, in the Dakotas, Kansas and across the Mississippi River. He even explained that he was part of a circus or that he played the piano on early Elvis Presley records. When Newsweek revealed that he was actually the son of an appliance salesman, Dylan was furious. His scholars consider that at that point the difficult and acrimonious relationship between him and the press began.

Anyway, all those personalities converged in the Big Apple. Dylan himself explains in Chronicles (Chronicles), the first volume of his memoirs, that “New York was the magnet, the force that draws objects to it.” That metropolis that was approaching the precipice of bankruptcy, and that lost its calm due to the crack crisis, was still safe and cheap.

He rarely left the Village and played everywhere he could, many now defunct (Folklore Center, Commons/Fat Black Pussycat or Mills House); others that exist (Wha?, Caffe Reggio or The Bitter End); and other converted ones, such as the Dante, now a place for elegant cocktails, or the Gaslight, which has had various reincarnations (today Up & UP).

One of the places where he cut his teeth was Café Bizarre (west of Third Street), the first place in the Village to present folk music, according to Van Ronk, such a good explorer of the territory that he was called “the mayor of MacDougal”.

He grew up in folk venues, especially on MacDougal Street, slept on sofas and released his first album in 1962

There were the stables owned by Aaron Burr, vice president of the United States with Thomas Jefferson, although he was better known for killing Alexander Hamilton in 1804, one of the founders of the country, the first secretary of the Treasury and a musical star thanks to Lin-Manuel Miranda.

The Bizarre – “where the rhythm meets the elite” – opened in 1957. It featured John Cale and Lou Reed, both partners in the Velvet Underground. The campus ended up being a victim of real estate speculation and in its place there are New York University dormitories. “Dylan arrived at the peak of the folk revival movement. He was in the right place at the right time,” says Gray.

“It was placed on the political left, the new left, especially because of the influence of Suze Rotolo,” he adds. Suze, who was 17 years old, had already met Bob, although she did not pay much attention to him until July 29, 1961. Dylan participated that day in his first big performance in the Riverside Church, a cathedral-style building in the Upper Westside. He was part of a twelve-hour concert whose poster featured figures like Pete Seeger.

In December of that year, the couple moved into what was Dylan’s first apartment in town, an apartment on West Fourth Street, a shoebox for $60 a month.

Then he had recently recorded his first album with the Columbia label. She had impressed producer John Hammond (his portfolio includes Bruce Springsteen and Aretha Franklin). It was published in March 1962, a compendium of thirteen traditional songs and two originals, Talkin’ New York and Song to Woody .

“The first year and a half in New York had been decisive for him. He had impacted the Village,” Sawyers indicates. On August 2 he went to court and made his name change official. He was already legally Bob Dylan.

“He was very ambitious and knew what he wanted,” says Gray.

In April of that 1962 he began to record his second album, the first exclusively of his own songs. The Freewheelin’ came out in 1963, with hymns like Blowin’ in the wind , and made him a songwriter with an original vision. The album’s cover photo, of Bob and Suze on Jones Street near their apartment, became a hallmark.

“The songs were there, waiting for someone to write them. I put them on paper, if I didn’t do it, someone else would, ”she confessed. “I had the feeling that fate was directing me. I was riding the evolution, my consciousness started to change,” she insisted. He and his music changed.

He broke up with Rotolo –“I didn’t want to be another string on his guitar”, this artist who died in 2011 pointed out in his memoirs–, published more albums, other hymns. She had a serious motorcycle accident, she moved to Woodstock, in the state of New York, until the historic festival of 1969 burst her bubble.

“The songs were there, waiting for someone to write them,” he said after his first album.

He went back to the Village. He bought a 19th-century house at 94 MacDougal, across from Caffé Dante, seeking privacy. It transpired that he lived at that address “and people paraded up and down in front of my home demanding that I leave, that I stop avoiding my duties as the conscience of a generation.” Neither Bob Dylan nor the Village were the same.

There were some visionaries. In the early days, in September 1961, Dylan performed at Gerde’s Folk City (now defunct). Robert Shelton (born Shapiro), wrote a review at New York Times in which he described this young artist as “a cross between a choirboy and a beatnik”, and in which he highlighted his tendency to exaggerate and invent things.

But he concluded that this was not relevant. “It matters less where you’ve been than where you’re going,” she concluded. It was published on September 29, 1961.

The Village where Bob Dylan was born