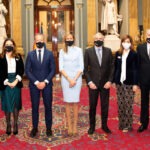 The Nobel Peace Prize and former President of Liberia, Ellen Johnson-Sirleaf (Honor Award); Anne gentleman (Woman of the Year Award); Margarete Grafin Von Galen (Values ​​Award); UN Women (Equality Award) and the Center for Political and Constitutional Studies (Sustainable Justice Award) received the highest distinctions in the 3rd edition of the Awards Women in a Legal World. Some awards that recognize the professional career of women of recognized prestige with a consolidated career, which was born with the aim of rewarding values ​​in their broadest sense and also to distinguish the organizations most involved in empowering and promoting female talent.

“The WLW awards are framed in one of the objectives of the association: to give visibility to women within the legal sector inside and outside of Spain who have had or are having a memorable career and who, despite being authentic references many times, for various reasons, are not put in the place they should,” said Marlen Estévez, president of WLW.

Estévez emphasized that these third prizes reinforce our mission of positioning Spain as a pioneer in achieving a diverse legal sector where “it is no longer exceptional to see a woman at the head of a law firm, directing a law school, presiding over the jury of a grand prize, in front of a High Court or leading the legal service of a listed company”

For your partAna Martínez Enguídanos, general secretary, Director of Institutional Relations of WLW and leader of this project, stressed that at WLW, they consider it essential to promote and give visibility to excellent women in the legal field; generate an impact on society so that our opinions are taken into greater consideration and that there are more women in senior management positions in our sector; as well as highlighting the good practices of the offices, companies and institutions of the sector; encourage professional promotion without gender bias, help the new generations and lastly, promote the follow-up of the 2030 Agenda.

The WLE Award of Honor was awarded to Ellen Johnson-Sirleafthe first woman to be elected president in Africa, received the Nobel Peace Prize in 2011 for her nonviolent struggle for the rights of women to work in the construction of peace, in her country, Liberia. Johnson-Sirleaf took office with a six-year mandate as the first female president of an African republic and with a colossal mission: to rebuild a devastated country, humanly and materially, after the two civil wars it suffered between 1989 and 2003. President Johnson-Sirleaf is member of the Council of Women World Leaders whose mission is to mobilize the highest level of women leaders worldwide for collective action on important issues such as equitable development.

WLW Woman of the Year Award, went to Anne Hidalgo, mayor of Paris. gentleman She was born in San Fernando, Cádiz, Andalusia, and the granddaughter of a person victimized by the Franco regime and the daughter of economic immigrants. who settled in France when she was two years old and French by choice. But she does not forget her roots and she makes constant references to her Spanish origin. Her proposals are linked to traditional social democracy, with a rather pragmatic and pro-European programme.

The “WLW Award for Values” was awarded to Margarete Grafin Von Galen, President of the Council of Lawyers of Europe (CCBE). Practicing as a lawyer specialized in Criminal Law since 1998, she is an expert in the hearings of the German Parliament and the European Commission, advising on matters related to European Criminal Law. This Values ​​Award to Margarete Grafin aims to reward those people or institutions that have stood out in the defense of human rights and ethics.

The “WLW Prize for Equality” has been for UN Women, which is the United Nations entity dedicated to gender equality and the empowerment of women. Gender inequality is a pervasive phenomenon where women lack access to decent employment and face gender pay gaps. Around the world, women and girls are systematically deprived of access to education and health care, are underrepresented in economic and political decision-making, and are victims of violence and discrimination. UN-Women was created in order to accelerate progress in meeting their needs around the world.

Finally, the Sustainable Justice Award” is for the Center for Political and Constitutional Studies, for promoting the analysis of the national and international legal and sociopolitical reality. As a research center, it pays special attention to the development of public law and social sciences, both in Europe and Latin America. It is an organization open to the whole society, which places at the service of society and the political and academic community an intellectual prestige forged in more than 70 years of quality work, assuming the responsibility of continuing to increase it thanks to an operation based on efficiency, pluralism and transparency in the management of public resources assigned to it.

After the success of the first and second editions, WLW will deliver the 3rd Women in a Legal World Awards on March 10 at the Royal Academy of Fine Arts of San Fernando, in Madrid. These are awards that recognize the work that people, companies and institutions carry out on a daily basis, and which have been chosen by a jury made up of the highest figures in the political, legal and professional establishment in Spain.

WLW is a non-profit organization born in Spain made up of professional women from the legal sector. Among its objectives is to make female leadership visible in this field and create the conditions for all professionals – men and women – to develop their careers with the same opportunities. Our members are professional women in the legal sector, with the ability to influence, who want to transform the environment in which they operate, creating the conditions that allow all professionals, men and women, to have the same opportunity to shine and achieve success in his career, thus configuring a model that satisfies everyone.

The Women in a Legal World Awards recognize the work and career of the Novel Peace Prize-Ellen Johnson, Anne Hidalgo, Margarete Grafin Volan Galen, UN Women and the Center for Constitutional Political Studies