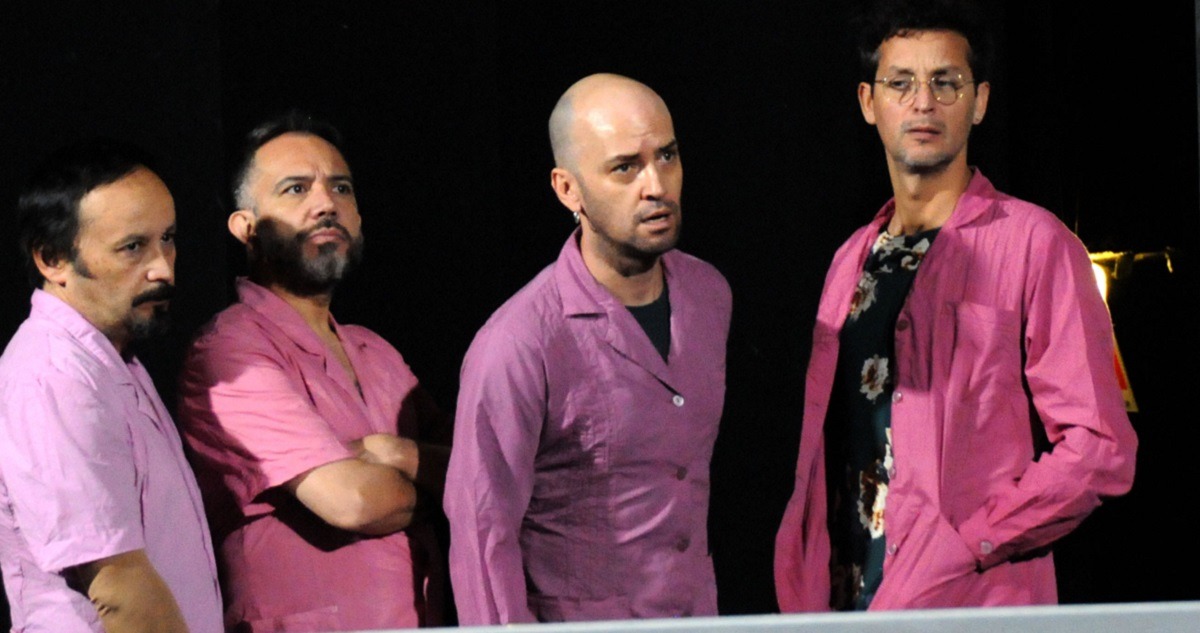 A proposal whose critical sense from a feminist point of view is especially acute characterizes this adaptation of the homonymous novel by Elfriede Jelinek (Nobel Prize for Literature 2004) made by The Braiers Collective.

The reflection posed by “The Lovers” is broad-spectrum when questioning from the capitalist economic base of society to the particular conditions within the family, including the most intimate and valuable ones that are part of the relationship between people.

There are three options that attract the most attention, taken by the director: she selects a male cast to allude to the women in the work; she does not profile them as transvestites or caricature them; and she gets the actors to look into themselves, use and display their feminine side.

Thus, while the men suggest what a woman wears and their voices are manifested in a choral way, body gestures allude to tenderness and sensitivity, all intertwined with emotions and with the contribution of the male side of the castalso present in women: firmness, decision and energy, resources that alternate according to circumstances.

This unconventional structure of “The Lovers” had been experienced before by the director Heidrun Breier in “Banal”, by Mauricio Barría (2015) and “Too short legs”, by Katja Brunner (2018).

Brigitte and Paula have the same classic idea about how they imagine their personal fulfillment: falling in love, getting married, having children and a financially secure life.

One lives in the city, works in a factory and although she doesn’t know if she loves her boyfriend, she wants to get married: she values ​​her entrepreneurship; the second, 15 years old, lives in the town, she wants to be a seamstress, but since she is very much in love with her, her goal will be cut short.

The underlying theme questioning the capitalist and patriarchal economic structure assumes a discourse that unfolds, through a system of dialogues that runs at high speed, while the history of these women is being built.

The tragicomic will occupy its space, turning the work into a laboratory where ardent emotions, pain, laughter and ideas merge.appropriated and emitted by voices that alternate different roles, in a more concrete and cold scenographic, lighting and sound environment.

At times, the choir of voices passes from the group to duets, solos or trios that connect the social and political vision with the ideological superstructure and values ​​that appear during the dynamic stage action.

The naturalization of intrafamily violence, the machismo promoted by themselves, even to the detriment of the women around them, and the abuse in the most intimate universe are shown as reflections of what is happening at a social level.

Strong emphasis and intentionally underlined intentions arise at times to express ideas and emotions that suddenly complement each other or turn towards the playful and ironic that relax the harshness of a situation and the viewer.

It happens with the classic idea of ​​love represented by the two women, plot that inserts them into an affective and oppressive dependency, considered as something natural and biological in the patriarchal society, which is shown on stage with a plot base and a sense of comedy.

It also alludes to another concept that plays a relevant role, previously raised by the director to explain that a male cast could better account for a statement by the author of “The Lovers” regarding the male-female relationship.

“The one clings to the body of the other and lodges inside like an invader, lives and extracts its food from it. This is called: symbiosis”it states Elfriede Jelinek.

This meeting is seen on stage as if it were something necessary to survive: the bodies of the actors seem to always be in balance between two forces, feeling the weight of the universal history of women.

A condition that also prevents women from being seen as victims, since their abilities to build their own destiny are appealed to and underlined.