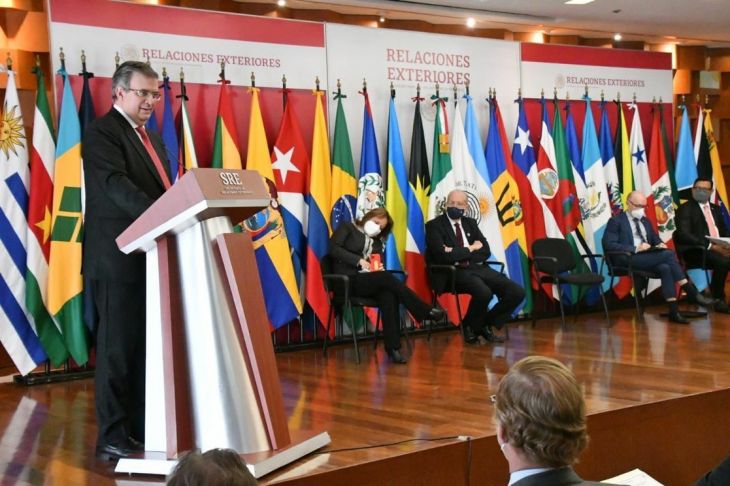 Mexico led the regional fight against nuclear weapons 55 years ago; That feat today is an inspiration in the deployment of the best of Mexican diplomacy to end the trafficking of light firearms, which are responsible for more than half of the murders and gender-based crimes on a global scale, said the Foreign Minister Marcelo Ebrard Casaubón.

When commemorating the 55th anniversary of the opening for signature of the Treaty for the Prohibition of Nuclear Weapons in Latin America and the Caribbean, known as the Treaty of Tlatelolco, the head of the Ministry of Foreign Affairs (SRE) highlighted the actions undertaken by the current federal administration to combat the proliferation of light weapons in Mexico, the vast majority of which end up in the hands of organized crime.

“Mexico has a commitment that covers other weapons that are called light weapons or weapons that are not weapons of mass destruction, but in reality they are responsible for more than half of all homicides and femicides in the world each year. It is equally important to focus the fight on that task”, he emphasized.

In the act, held this morning at the headquarters of the SRE, it was also celebrated that 40 years ago the Nobel Peace Prize was awarded to the Mexican diplomat Alfonso García Robles, who was the main promoter of the Treaty of Tlatelolco -signed by the 33 countries of Latin America and the Caribbean—considered one of the great milestones of Mexican diplomacy, since it has been a fundamental piece in guaranteeing peace and security in the region.

Ebrard stressed that said Treaty “was a pioneer” in the fight against nuclear weapons and with it, Latin America and the Caribbean put on the table in world geopolitics the feasibility of having zones free of any nuclear risk.

“We want to take as inspiration what was achieved regarding nuclear weapons in our region, to do something similar to the weapons responsible for a good measure of the fatality rate of the violence that we have in the countries of Latin America and the Caribbean and other regions of the world”, stated Ebrard.

The diplomatic strategy against light weapons that Mexico has undertaken today, he said, includes several aspects, such as the lawsuit for “negligence” against firearms manufacturers before a Federal Court in Massachusetts, since they produce an arsenal aimed “at a very close market to drug trafficking”; as well as the presentation and approval of an initiative in the Security Council of the United Nations Organization to control its illicit traffic.

“That is the policy that President López Obrador has come to promote (…) I am certain that as was achieved in the past, more than half a century ago, in terms of nuclear weapons, which was seen as impossible, because now it is proposes that we also do so with respect to other weapons that are light from the point of view of their comparison with those of mass destruction, but are lethal to individuals, as we live every day in the face of the violence that we are experiencing throughout the world ”.

Representatives of the Agency for the Prohibition of Nuclear Weapons in Latin America and the Caribbean (Opanal) and diplomats from the region participated in the event. A joint statement was read, in which the 33 Opanal party states recalled that the Treaty of Tlatelolco has guaranteed for more than five decades that Latin America and the Caribbean remain free of nuclear weapons and demanded that this type of weapon not be used again by any actor under any circumstances.

They commemorate Mexico’s fight against nuclear weapons in Latin America