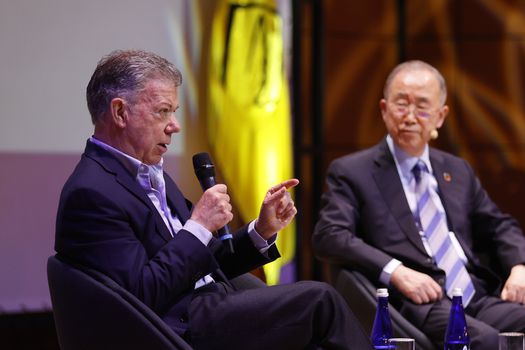 The conversation between Juan Manuel Santos and Ban Ki-moon took place at the Universidad de Los Andes, in Bogotá.

Former UN Secretary General Ban Ki-moon was “very proud” of having contributed to the peace process in Colombia, while wishing that this agreement “continues to be respected.” At a conference organized in Bogotá by the Universidad de los Andes, Ban spoke with former Colombian President Juan Manuel Santos about the peace process and future challenges, as well as the good relationship between Colombia and South Korea.

Ban, who was Secretary General of the UN from 2007 to 2016, is in Colombia to participate in the Bogotá International Book Fair, of which South Korea is the guest of honor, and present his book “Resolved: Unite the nations in a divided world.

“I think that peace and security are very important,” added the South Korean diplomat, while praising Santos’ “leadership” during his presidential term (2010-2018), when he was able to “reach that peace agreement” with the guerrillas of the FARC, which was signed in November 2016. “As secretary general I wanted to provide the support of the UN and my own personal support,” he said.

Referring to the growth of the FARC dissidents and the worsening of the armed conflict, Ban asked “the Government of Colombia and its people to unite.” In this sense, Santos asserted that “they have not been able to derail the peace process because it is protected constitutionally and by the United Nations,” and said that he hopes that “the next two governments” will fully implement it.

The former president and 2016 Nobel Peace Prize laureate lamented the “lack of political will” of the current government, which he blamed for the assassination of social leaders and the problems in implementing the agreement. In this regard, he indicated that the government of President Iván Duque was “stupid enough” not to negotiate with the ELN, with whom there was “a great probability” of achieving peace.

Ban, who is a defender of the environment, also referred to issues of global interest, since as Secretary General of the UN he was a promoter of the Paris Agreement against climate change and the Sustainable Development Goals (SDG).

“I am not here to talk only about the good relations between Colombia and Korea, but I am here to talk about global issues that threaten our humanity and our land,” he continued.

Although the SDGs have had “tangible progress”, this “has not been the same, it has not reached everyone, and the conflict, covid-19 and the global crisis that we are experiencing at the moment have shown that there have been regressions”, he claimed.

In this sense, he stressed that it is necessary to guarantee that by 2030 there is no “poverty or hunger, there should be no one who should be left out of education, of health. That is our goal.”

We must also redouble efforts in the digital field, considering that half of the world’s population does not have access to the internet, and “learn the philosophical lessons that come from water”, always with the climate crisis present, since we must raise the level of commitment and ambition, because it is “happening much faster than we thought,” he warned.

“Unless we stop the increase in temperature (…) unless that is possible, we will not have a future for humanity,” Ban warned, while urging “all Colombians to do much more than they have done so far” for the planet.

Ban was also received today at the Casa de Nariño by President Duque, with whom he discussed the climate crisis and the country’s challenges of reducing CO2 emissions by 2030, being carbon neutral by 2050 and declaring this same year at 30% of the national territory as a protected area, said Duque on his Twitter account.

“They have not been able to derail the peace process”: Juan Manuel Santos