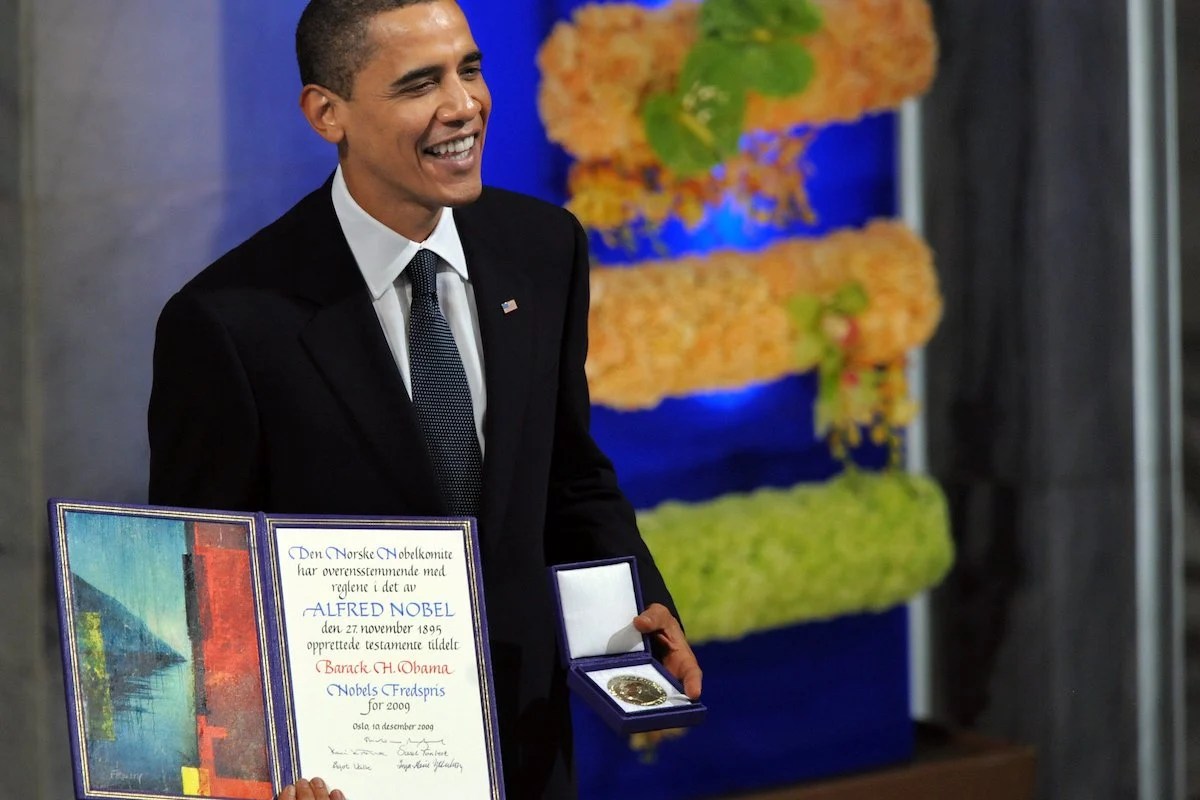 When former US President Barack Obama received the prestigious Nobel Peace Prize in 2009, he had been in office for less than a year. The Nobel Committee, in its statement, said that the first black president deserved it becauseUnder his mandate, “multilateral diplomacy has regained a central position, with emphasis on the role of the United Nations.” Does this make you a peacemaker? The Nobel Committee thinks so.

Peacemaker Mr. Obama went on to preside over America’s hegemonic foreign policy, as a superpower, continually flexing his muscles around the world. Under Obama, a peacemaker, the United States went to war in Libya in 2011, destroying a UN member state and setting it on a course of free fall ever since. As commander-in-chief of the US military, Mr. Obama authorized 1,878 drone strikes in primarily Muslim countries, including Afghanistan, Pakistan, Libya, Somalia, and Yemen. In many of those attacks, always justified by the absurd claim that a terrorist target had been hit, hundreds, if not thousands, of innocent women, men, children and animals were killed in what the US military often describes as “collateral damage.” . Mr. Obama seemed to have misled many with his speech at Cairo University in June 2009, when he spoke of “new beginnings” with the Muslim world.

1878 drone strikes in eight years is not much compared to the 2,243 attacks recorded by Donald Trump in the first two years of his presidency. But poor Trump didn’t win the Nobel!

When President Obama left the White House, the US military was still on the ground as an occupying force in Iraq and Afghanistan, covertly supporting the Saudi war on Yemen, and the US “war on terror” never ended.

READ: Taking Iran out of Syria

Abiy Ahmed became Ethiopia’s prime minister in 2018, and in 2019 he was considered by the Nobel Committee worthy of his peace award given his “efforts to achieve peace and international cooperation” highlighting his “decisive initiative”, to end the war with Eritrea. He won the elections with an anti-corruption and accountability platform. Last year, the Nobel laureate declared war within his own country. Aided by Eritrean troops, Ethiopian forces continue to try to drive tiger fighters out of the northern Tigray region. Since November 2020, thousands of people have been displaced, while tens of thousands sought refuge in Sudan and hundreds of thousands are on the brink of famine, reliving horrific memories of the 1980s famine that hit the country especially to the Tigray region, killing more than 1.2 million people.

For Aung San Suu Kyi from Myanmar (formerly Burma), the Nobel Prize came in a more classical way. In 1991, the committee managing the award said that Suu Kyi deserved for their “non-violent struggle” for democracy and human rights. In a informational page About her, the Committee said that Ms Suu Kyi was “inspired by Mahatma Gandhi”, the Indian father of non-violent protests around the world. However, that Committee did not consider that Mahatma Gandhi was eligible for its award, despite being nominated five times between 1937 and 1948, but someone he inspired did win!

A peace dove flies past a relief of Alfred Nobel after being released in front of the Nobel Peace Center in Oslo, Norway, on October 8, 2021. [ALI ZARE/NTB/AFP vía Getty Images].

Aung San Suu Kyi’s party won both Myanmar elections, first in 2015 and then in 2020, but was prevented from being president by the Constitution because she had foreign children. However, she became the de facto leader of the country, until the army deposed her last February. Under Suu Kyi, thousands of people from the Rohingya Muslim minority fled the country to neighboring Bangladesh, where they live in degrading conditions. The Rohingya have always been the victims of brutal repression, rape and displacement in Myanmar, but what began in 2017 under Nobel’s leadership has never been seen.

In all three cases, the winners have lost all moral ground to even qualify thanks to their own actions. Many see former President Obama as a war criminal. The same, to a lesser extent, can be said of the current Ethiopian Prime Minister, Abiy Ahmed. He could soon be embroiled in a war with Sudan or Egypt, if not over border disputes with the former, then over the waters of the Nile with the latter.

The Cultural Genocide in Palestine: On Sally Rooney’s Decision to Boycott Israel

For Ms Suu Kyi, who is still in prison, the fact of being awarded the Nobel is even more embarrassing, not only for herself, but also for the Norwegian Committee that awarded her the prize. Unlike Abiy Ahmed and Barack Obama, she received the award primarily for her fight for human rights and democracy.

Never has the Norwegian Committee retired no peace prize after awarding it. In 2018, a UN report harshly criticized Ms Suu Kyi for not speaking out against what her army did against Rohingya civilians. When asked about the possibility of withdrawing the award from Aung Suu Kyi, a representative of the Norwegian Committee said: “We are not doing it. It is not our task to monitor or censor the behavior of the winners after they have won the award.”

But this is a mistake, considering the privileges that the award brings to individuals in terms of money, prestige and reputation. When deciding who wins the award, the Norwegian Committee has clear criteria to evaluate the winners in, for example, physics, medicine or chemistry. But not in the case of the peace prize, as the guidelines are blurry at best. Also, some worthy winners from the past may not feel comfortable giving the prize to someone less worthy. For example, by winning the Nobel Prize in 2009, many consider Barack Obama to be on an equal footing with the late Nelson Mandela, who won the Nobel Peace Prize in 1993, which is not fair. The only guideline for the committee that awards the award is a section of the will of its founder, Alfred Nobel: it says that someone deserves it if that person has “done the greatest or best work for the brotherhood among nations, for the abolition or reduction for the standing armies and for holding and promoting peace congresses “Obama, Abiy Ahmed and Aung Suu Ky do not fit that description. It is time for Nobel’s will to be adapted to reflect current standards, without actually changing it. Otherwise, the award will continue to lose credibility, while becoming politicized.

The opinions expressed in this article are those of the author and do not necessarily reflect the editorial policy of East Monitor.

Mustafa Fetouri is a Libyan academic and journalist. He has received the EU Prize for Freedom of the Press. His next book will be out in September. He can be contacted at the following address: [email protected]