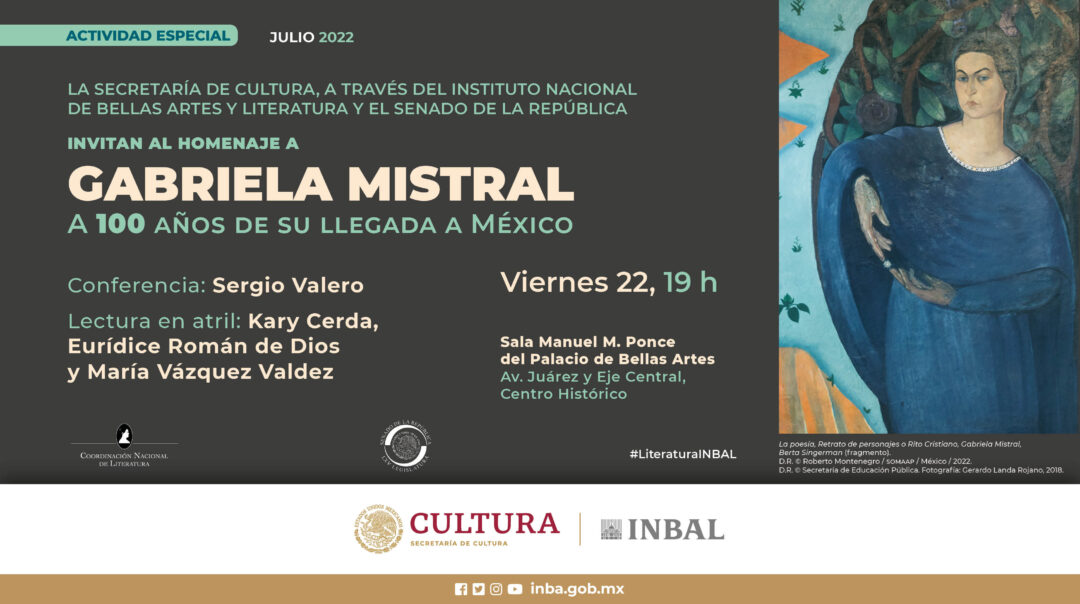 With a reading of part of her work and a talk, the culture authorities and the Senate of the Republic will commemorate the Chilean poet

Gabriela Mistral. 100 years after her arrival in Mexico is the name of the tribute that will be held in the Manuel M. Ponce Hall of the Palace of Fine Arts to remember the work of the Chilean poet and the series of activities she carried out in our country, both in the cultural and literary fields. , as what she contributed to education during her stay, which earned her the reference of “the teacher of Mexico”.

The program of the activity that will take place next friday july 22 at 7:00 p.m., it consists of the reading of a selection of Mistral’s work, in the voice of the Mexican poets Kary Cerda, María Vázquez Valdez, Eurídice Román de Dios and Dulce Chiang, and the conference dictated by the poet Sergio Valero , who will delve into the poetic legacy of the author, the first of Latin American origin to win the Nobel Prize for Literature in 1945, are part of the tribute at the highest cultural venue in Mexico.

The deputy director general of Fine Arts, Laura Ramírez Rasgado, will moderate the activity around one of the most representative figures of 20th-century Latin American culture and literature.

Gabriela Mistral was born in the city of Vicuña, Chile, with the name of Lucila de María del Perpetuo Socorro Godoy Alcayaga; her work and her legacy transcended borders under the pseudonym she took in recognition of two of her favorite poets: Gabriele D’Annunzio and Frédéric Mistral, which she used for the first time when publishing the poem From the pastin 1908.

In 1922, at the invitation of the Ministry of Public Education (SEP), led by the Mexican writer, politician, and intellectual José Vasconcelos —who proposed bringing free education to all sectors of the country, particularly rural and indigenous communities—, Gabriela Mistral arrived in Mexico to be part of the calls cultural missions.

From July of that year and until 1924, the author of works such as Tenderness (1924), felling (1938) and Winery (1954), who also developed as an educator, rural teacher, gave talks, founded schools and provided guidance to teachers on classes, teaching materials and the use of libraries.

During this stage, as part of the national campaign whose purpose was to promote the development of communities through free basic education, culture and recreation, Mistral traveled through Hidalgo, Morelos, Puebla, Guerrero, Michoacán, Oaxaca, Jalisco, Querétaro and Veracruz. More than two decades later, in 1948, the writer and also a diplomat returned to Mexico to settle in Veracruz, where she served as Chilean consul for two years.

The author, cultural promoter and delegate to the United Nations General Assembly, died on January 10, 1957 in New York, United States, a country where she taught at Bernard College, Vassar College and Middlebury College, in addition to performing functions as consul in the city that saw its last days. From her teaching work, she collaborated with the universities of Puerto Rico, Havana and Panama.

In addition to the Nobel Prize for Literature in 1945, Mistral’s work was recognized by the Academy of American Franciscan History in Washington in 1950 with the Serra de las Américas prize, and by the government of his country with the Chilean National Prize for Literature, in 1951, among others.

Tribute to Gabriela Mistral | The Capital