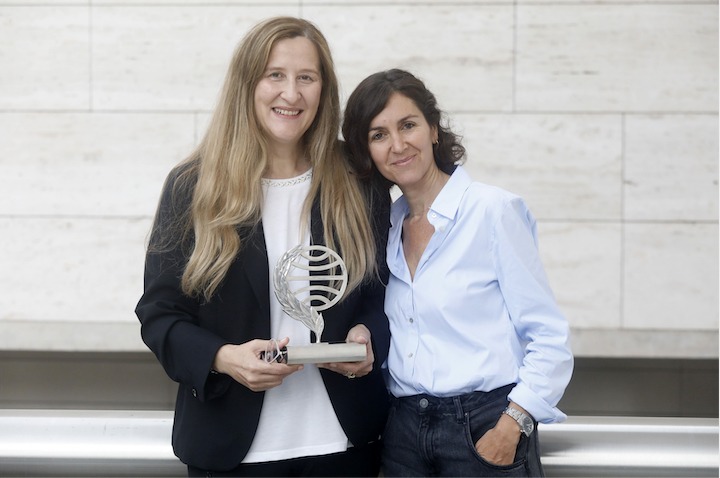 The winner of the Planeta, Luz Gabás, and the finalist, Cristina Campos, present their novels in Valencia

They have spent so much time together since the Planeta prize was awarded, on October 15, that they already seem like a duo. They are living a dream and it shows. They are not a comic duo, but they are nice. They give way to each other, they wonder, they take the floor… This is how they acted, in the best sense of the word, last Thursday in the El Corte Inglés cafeteria before the dozen or so journalists who attended a talk with the winner of the Planeta la filóloga award Luz Gabas (which rocked the publishing world in 2012 with palm trees in the snow) and the finalist, the screenwriter Cristina Campos (known for the success of Lemon Poppy Seed Bread).

The awarded works are as different as they are basically similar. Gabas took the Planeta prize (statue and one million euros) with Far from Louisiana, a novel that talks about when the US state was Spanish territory. Campos has been a finalist thanks to Stories of married women (statuette and 200,000 euros, which is not bad at all), a story with infidelity as the common thread. Both tell love stories that, although separated by more than three centuries and thousands of kilometers, speak of women who carry a burden that prevents them from living the future they want.

Both books, in their own way, travel through little-explored places. Few people know that, after being French, Louisiana became a Spanish territory. Telling that hidden page of our history is what led Gabas to find the context he was looking for for his next novel. Campos’s is an emotional field, but no less unexplored for that: that of the feelings of a married woman when infidelity —hers or her husband’s— crosses her life.

Another common point is the vital experiences of all the protagonists. As Gaba explained “happiness does not give a plot. I could have chosen Cecile, a woman who, when her husband goes to France, stays in Louisiana with her lover and has four children, and when her husband returns and demands to have her by his side in court, she runs away with her love. , her children, and becomes a successful businesswoman. But I preferred Cecile, who finds it much more difficult to decide on her fate ».

Another point in common – nothing new, by the way – is that both authors see themselves as part of the novel. Gabas “not in a specific character, but fragmented into a thousand voices.” Campos is more Gabriela, the head of the journalists who have a history of infidelity in common, “and that she is like a mother to them.”

But if the protagonists of Lejos de Lusiana live in a world in which they are relegated to the background, and society and education are the ones that set the limits for them, the “married women” of Cristina Campos face other obstacles. «They are successful in a certain way, but something is missing or there is something that does not work as it should: one maintains a long relationship with her lover while another knows that her husband, with whom she almost no longer has sex, is a regular of luxury prostitution. They have achieved a lot in life, but they have also created a life that is not easy to get out of or change.. The clearest example is the children, who are often what some prefer to continue as they are instead of changing, “he explains.

“Sometimes,” he continues, “what they want just doesn’t exist. When Gabriela, one of my protagonists, tells her lover that she wants to go with him, she answers that she, if he goes with her, he will become what he already has, and that what one day is passion another day will be routine ». Deep down it’s not that different from what happens to Suzzette in Far from Louisiana when they warn him that “Do not ask for an easy life, ask for strength to endure a difficult life.”

For both writers, the relationship with reality is a difficult line not to cross, but always with the limit imposed by literature. the author of Far from Louisiana, turned into a true bookworm to find all the documents of the time that it portrays, «I have been faithful with the characters that belong to the Administration of the time but I have also created my own, and on them I have built the plot. In my case, the danger was to make history a novel and I wanted a historical novel ».

The way of documenting Cristina Campos was not so exhaustive. Everything that appears in her book is true, but it is still fiction. «What happens to the protagonists are things that women who have experienced cases of infidelity have told me. If when one of her was looking for the pleasure that her husband did not give her by seeing women’s prone, it is because they have told me. But I have not made a biography of the people with whom I spoke, I have used their true story to tell something that has never happened.

This edition of Planeta has been the most attended in its history, since its first edition in 1952. In this seventieth edition, a total of 846 soap operas from all Spanish-speaking countries attended —but not only: from China or Israel, for For example, two manuscripts arrived, and 26 from the US—a figure never before reached. Gabás introduced himself with the pseudonym “Fesno Leafand with the title Upstream; Campos sent a name text my wife’s loverwith the pen name of Gabriela Hausman.

United by the Planet Award, separated by three centuries of history – Valencia City