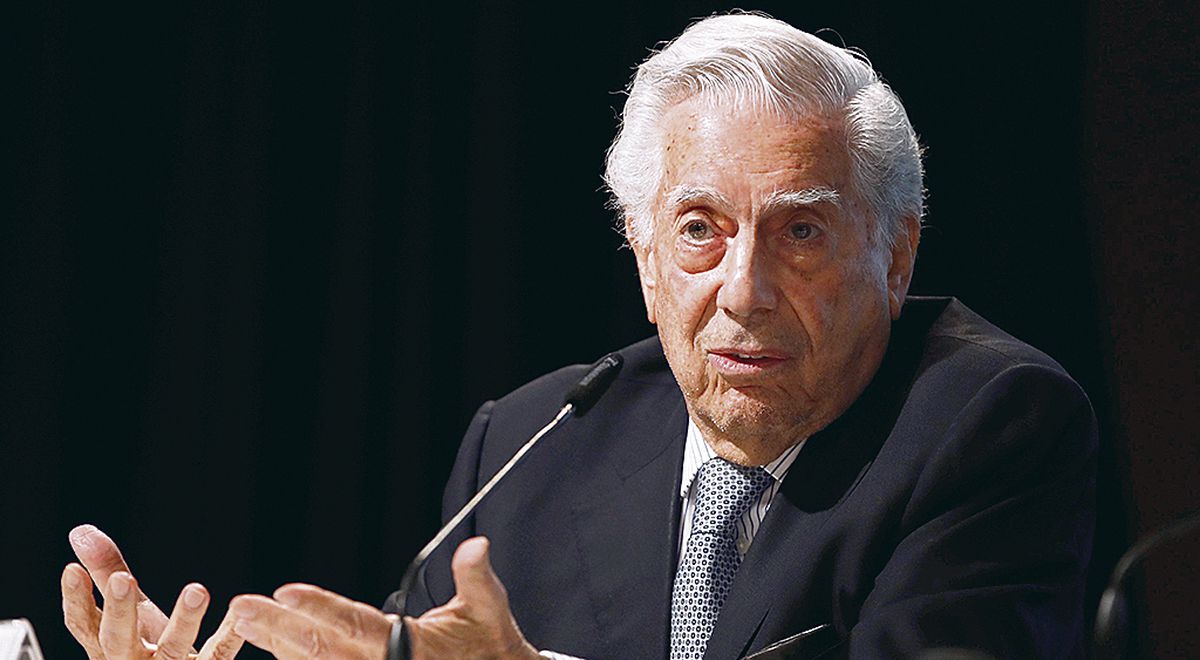 It was a conversation in his birthplace, the building on Parra Avenue, in the city of Arequipa, where he was born 86 years ago. He, from Spain, and the writer Jorge Eduardo Benavides in the house, now converted into a house-museum.

The activity was part of the celebrations organized by the Regional Government of Arequipa (GRA) for the birthday of the Nobel Prize for Literature 2010. Literature, the characters in his books and his new publication monopolize the gathering.

On the screen of a laptop, the face of Mario Vargas Llosa appears. Benavides sits at a small table in the “Café del Boom”, one of the rooms in the museum house that recreates the life of the Nobel Prize winner in detail. Under the portraits of the most important figures of the Latin American boom, the talk begins.

“I welcome you, in your house,” says Benavides and Mario smiles connected from Madrid. Precisely, the childhood of the author of “Conversation in the Cathedral”, is the starting point of the gathering.

Vargas Llosa reiterates that the most important thing that happened in his life is learning to read with brother Justiniano from La Salle school (Cochabamba -Bolivia). “Thanks to books I was able to travel, discover other cities, countries, time travel to the future or past. That discovery was pivotal,” he said.

Vargas Llosa was born in Arequipa on March 28, 1936. Months later, he left for Bolivia with his mother’s family. “In Cochabamba, my family took Arequipa with them. What I experienced from Peru in Bolivia was Arequipa. My grandparents, my mother, my uncles were born there (…) The most vivid memories had to do with the city. I was contaminating myself and they made me feel very Arequipa from the beginning, ”he answers.

JE Benavides (JEB): It is on record that in Conversation at the Cathedral, “Zavalita” talks about shrimp chupe.

Mario Vargas Llosa (MVLl): There is an episode that takes place in Arequipa. It had to do with my political memories of that time, they were the first demonstrations in the Odría dictatorship, which I hated because that dictatorship had removed José Luis Bustamante y Rivero from the presidency, who was a relative of my grandfather and whom we had great admiration.

JEB: Many of your characters are rescued from your life path. Scenes that you have lived, appear in your novels.

MVLL: Many of my characters are inspired from reality, although not necessarily from a physical point of view. Some have a certain physical and psychological characteristics of others. I used the experiences lived by me in the case of “Zavalita”, but I don’t remember if it was inspired by a character I knew or if it was entirely invented.

JEB: That character comes from when you work as a journalist

MVLL: So is. I started working at La Crónica as a journalist during the holidays between the fourth and fifth grades. There were all kinds of characters, experienced journalists with a long career, also many young people.

JEB: Many characters that appear in the book were part of your life

MVLL: One appears with his name (“Carlitos”) and also with all his characteristics. He was a relatively young editor who devoted himself to police reports, and he made me read a lot of Peruvian literature. He made me read (José María) Eguren and (César) Vallejo, whom I did not know. He took me to the Cordano bar to see Martín Adán. We spied on him from the door, because Adán, who lived in a mental hospital, would go out from time to time and go directly to Cordano to have a few beers.

JEB: Is that character called Carlitos?

MVLL: It was Carlos Ney Barrionuevo, it is the name of this friend that I had in La Crónica (…) I remember that he also made me read the French with whom I was hooked. For example (Jean Paul) Sartre who had a huge influence, (Albert) Camus too, Simone de Beauvoir. The existentialists were very fashionable, so much so that I learned French at the Alliance Française. When I joined the Communist Party in San Marcos, which was very sectarian, very Stalinist, I think that reading Sartre, Camus, immunized me a little.

JEB: Did you realize that not being a French writer, you occupy seat 18 of the French Academy. What does that mean for you?

MVLL: Although I was never a French writer, the influence exerted by its culture, more specifically its literature, was very great. I remember that the same day I arrived in Paris I bought a copy of Madame Bovary (by Gustave Flaubert) (…) All her novels impressed me greatly, but the one that had the most influence on me was her correspondence, especially the letters she wrote every day to his mistress, after working 10 to 12 hours a day at Madame Bovary. His correspondence is absolutely an exceptional document about the intellectual intimacy of Flaubert himself. I followed that book, I imitated it; I think it was the great influence I had, especially in those years that I lived in France.

JEB: Where you also had a lot of relationship with other great writers of the boom.

MVLL: There were many Latin American writers passing through Paris. I remember Carlos Fuentes, Julio Cortázar who lived in France for several years with his wife. They were UNESCO translators. There was scandalous talk that Cortázar and his wife had been rejected for a permanent job at UNESCO. The reason they gave is that they wanted to go to museums so they could see shows. I think Cortázar was the first friend I had among the writers who passed through Paris. He and Aurora led a completely discreet life and they cared a lot about painting, they went a lot to the galleries. Cortázar was a character who wrote stories and was very generous with young people, he always gave advice.

JEB: When you finished the draft of the Conversation in the Cathedral you had said that it started as the story of a former bodyguard.

MVLL: I wanted to write a political novel about the Peruvian problem. And I always thought that a bodyguard could be the central figure, but when I started “Zavalita” was much more important. The bodyguard at the end is the driver of a businessman with good relations with the Odría government. “Zavalita” has in mind a phrase that is the deepest expression of what he believes about Peru. He says it with a certain vulgarity: “in Peru, whoever doesn’t screw up, screws up others.” I think it was my idea of ​​Peru, that there were Peruvians with privileges and that those privileges served them to crush, to sink others. It is a rather pessimistic novel, although I worked a lot on it. Only “The war of the end of the world” took me as long as writing “Conversation in the Cathedral”.

JEB: Precisely in The War of the End of the World, a series of characters appear that correspond to certain archetypes, the military man, the romantic communist, Antonio Conselheiro himself; which are different forms of fanaticism.

MVLL: I wrote the book after reading Euclides de Cunha about the Canudos war. He made me understand that the ideas that come from Europe, in Latin America are transformed into something very different (…). The republicans find out that in the interior of Bahia there is a holy man called “Conselheiro” and some peasants who fanatically followed him. They had robbed churches, they had refused to pay taxes. The priests, who were rare representatives of civilization, had taught the peasants that when the Republic took power, it was actually the devil who had taken power. So the Conselheiro and the peasants were actually fighting against the devil personified in the Republic. Brazil sent a company, then a regiment, and then its entire army to confront the peasants in a terrible way. It was estimated 30,000 dead.

JEB: I have always enjoyed the novels of Benito Pérez Galdós and this new book of yours (The Still Gaze) is a pleasure to read.

MVLL: The famous coronavirus had us almost 16 months, 18 months practically confined. In such a way that I dedicated myself to reading Pérez Galdós and I had never read a writer for so long. I think he was a very unequal writer, because he believed in inspiration and didn’t always work all the novels in the same way. He is the author of great novels, such as Misericordia on the difference between rich and poor, a truly apocalyptic book. He also wrote about moneylenders. The bank that did not reach the humble and the lenders fulfilled the function among the humble and he creates a whole character who becomes a nobleman and who looks over his shoulder at the lenders who have succeeded him.

Vargas Llosa: “My idea before was like Zavalita’s, that in Peru whoever doesn’t fuck up, fucks up others”