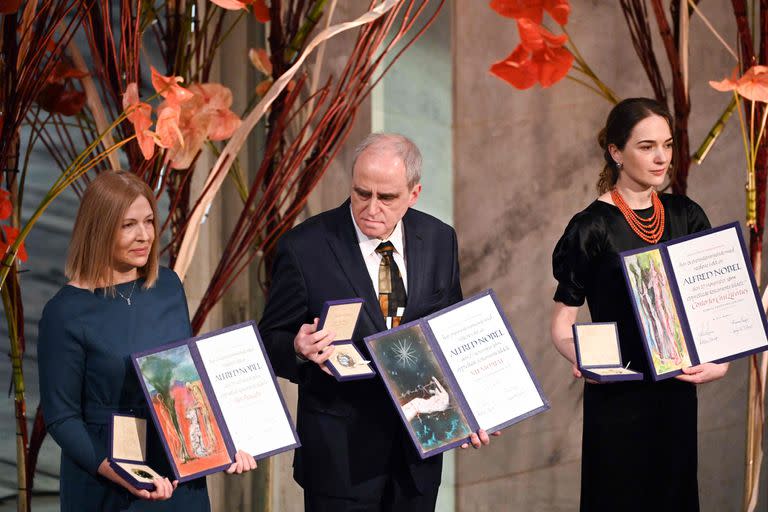 OSLO.- The winners of Ukraine, Russia and Belarus of the Nobel Peace Prize they rejected Vladimir Putin’s “senseless and criminal” war, receiving the prestigious award in Oslo on Saturday.

Originally from the three main countries involved in the conflict, the Belarusian militant Ales Beliatski -imprisoned in his country-, the Russian NGO Memorial -dissolved by justice- and the Center for Civil Liberties (CCL) of Ukraine, were lauded for their commitment to “human rights, democracy and peaceful coexistence” in the face of authoritarian forces.

“The people of Ukraine want peace more than anyone else in the world,” declared the director of the CCL, Oleksandra Matviichuk, at the delivery ceremony. “But peace for an attacked country is not achieved by laying down its arms. That would not be peace, but occupation.” added.

Created in 2007, the CCL reports on war crimes by Russian and pro-Russian troops in Ukraine.

Following Russian bombings of Ukrainian energy infrastructure, Matviichuk had to write his Nobel acceptance speech by candlelight, he told AFP in an interview before the ceremony.

In nine months of Russian invasion, the CCL accounted for “more than 27,000 episodes” of war crimes, according to her, and this is “just the tip of the iceberg”.

“War transforms people into numbers. We have to give a name back to all the victims of war crimes,” she said.

His voice cracking with emotion, Matviichuk once again called for the creation of an international tribunal to try “Putin [su aliado, el dirigente bielorruso Alexander]Lukashenko and other war criminals”.

The president of Memorial, the Russian Yan Rachinski, denounced for his part “imperial aspirations” in their country, heiresses of the USSR.

Putin’s Russia has misrepresented the historical meaning of the anti-fascist struggle “for the benefit of its own political interests,” he said. Now, “resisting Russia equals fascism,” he insisted.

This distortion provides a “ideological justification for the senseless and criminal war of aggression against Ukraine,” he said, despite a Moscow-imposed ban on publicly criticizing the invasion.

Memorial, which was founded in 1989, was dedicated to denouncing the crimes committed during the Stalinist period in the Soviet Union, as well as warning of human rights violations in Russia.

The Russian justice system dissolved this NGO at the end of 2021 and decided to requisition its offices on October 7 of this year, the same day that it was awarded the Nobel Peace Prize.

“Currently, the number of political prisoners in Russia is higher than the total number in the entire Soviet Union at the beginning of the perestroika period in the 1980s,” Rachinski warned.

The third laureate, the Belarusian activist Ales Beliatskifounder of the human rights NGO Viasna, has been in jail since July 2021.

Awaiting trial in which he can be sentenced to 12 years in prison for “smuggling” in favor of the opposition of the repressive regime of Lukashenko, this 60-year-old militant was not authorized to broadcast a thank you speech for the Nobel.

On his behalf, his wife Natalia Pinchukhad to limit himself to repeating some of his words, especially those that refer to the fight against “the international of dictatorships.”

In Ukraine, Russia wants to establish “a slave dictatorship, the same thing as in today’s Belarus, where the voice of the oppressed people is ignored, with Russian military bases, great economic dependence, a Russification of culture and language,” he said. .

“Goodness and truth must be able to protect themselves”, added.

The other Nobel awards (Medicine, Physics, Chemistry, Literature and Economics) will be held in the Swedish capital Stockholm, where up to 26 winners attend.

This especially high number was due to the fact that this year the Nobels were also awarded in 2020 and 2021, when the award ceremonies could not be held due to Covid-19.

War in Ukraine: the strong warning about Vladimir Putin during the delivery of the Nobel Peace Prize