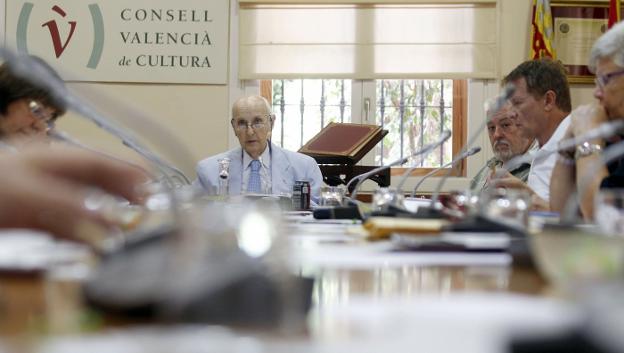 at CVC. Grisolía, in the presidency of one of the plenary sessions of the Valencian statutory institution. irene marilla

The president of AVE and vice president of the Rei Jaume I Awards, Vicente Boluda, guarantees the continuity of the professor’s legacy

The legacy of Santiago Grisolía and the objective of maintaining it and achieving his desire: «the pact for science». This is the challenge set by the president of AVE, FVEA and vice-president of the King Jaume I Foundation, Vicente Boluda, in his farewell to the scientist. Boluda pointed out that it is necessary to point the bow in the direction that Grisolía has always marked, which is to develop actions in the medium and long term in favor of science “without being subject to electoral cycles”.

The president of AVE thanked Grisolía in a statement for “vision, talent, work and dedication”. Boluda pointed out that thanks to the Prince of Asturias Award «the Valencian Community has become the epicenter of science, the Santiago Grisolía identified the challenge: more science. He also outlined the actions to be carried out: give prestige to our scientists, researchers and businessmen, unite civil society and convince public officials that they should think about science, even if it exceeded electoral periods ».

For the businessman, Grisolía was a pioneer because four decades ago he saw that the combination of businessmen, scientists and researchers “is what determines which territories and nations advance and which stagnate.” For Boluda, Grisolía always offered more than he demanded. The president of AVE pointed out that the scientist was essential for the unconditional support of the Royal House from the outset: «He made all his contacts and knowledge available to Valencian and Spanish society, so that the Rei Jaume I Awards were they became the most prestigious of their category in our country».

Valencia became a meeting point for Nobel Prize winners and for three decades several of the winners were part of the jury. “His imprint and instinct made our Awards recognize emerging scientists and researchers, whose contribution was already more than remarkable, but who had not yet received the recognition they deserved from society,” said Boluda, who added that the tenacity of the professor managed to make businessmen “assume the importance of supporting our researchers and incorporating science as part of the development of our business projects”.

«He went to visit many businessmen one by one, always hand in hand with the great Silvino Navarro and, already in the last decade, with the enormous contribution of Javier Quesada, to convince us that the private support of businessmen was essential, as had already been verified in its trajectory in the United States. And he got it. As a result of these visits, the Entrepreneur Award was also created, which Mercadona, EDEM and AVE have supported for 12 years”, he recalled.

Boluda added that Grisolía was never one to raise his voice «but he did ask us to support Valencian society, with its annual manifesto, in very relevant challenges in scientific or business matters not only for Spain, but for the whole world. In addition to obtaining the support of business and civil society, he demanded and obtained the support of all institutions. We have the responsibility to maintain the legacy of Santiago Grisolía”, concluded Boluda.