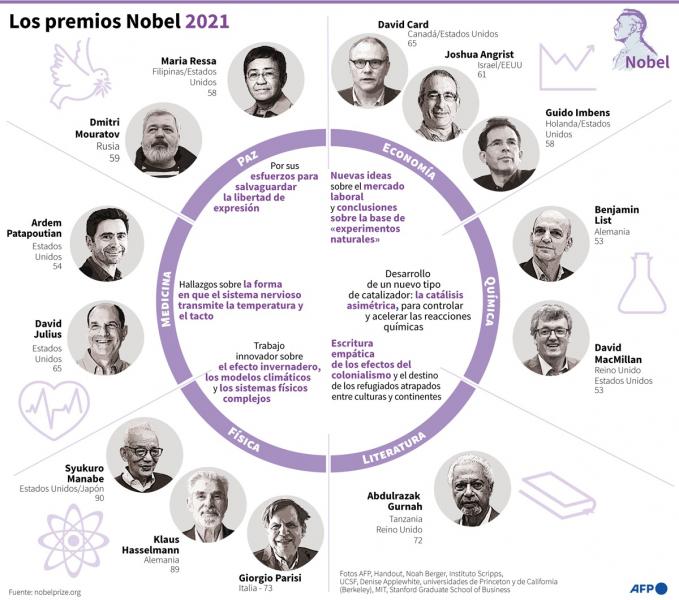 The Nobel Prizesintended for personalities who have worked for “the good of humanity”, are awarded from Monday until October 10 in Stockholm and Oslo.

Five things to know about these awards created by the Swedish chemist and engineer Alfred Nobel, inventor of dynamite.

Since 1974, the statutes of the Nobel Foundation stipulate that the prize cannot be awarded posthumously, unless death occurs after the name of the laureate has been announced.

Until the norm was put in writing, only two deceased Swedish personalities were awarded: the poet Erik Axel Karfeldt (literature in 1931) and the allegedly assassinated UN Secretary General, Dag Hammarskjöld (peace prize in 1961).

It has also happened that a prize is not awarded as a way of paying tribute to a deceased winner, as in 1948 after the death of Gandhi.

A recent laureate did not have the opportunity to receive the famous phone call announcing a Nobel: after the 2011 medicine award to the Canadian Ralph Steinman, his death was known three days before, although he is still on the list of winners.

The Nobel Prizes are endowed with a whopping 10 million Swedish crowns per category (about 900,000 dollars) and an 18-carat gold medal.

But Russian journalist and Nobel Peace Prize winner Dmitri Muratov managed to turn gold into a fortune for Ukrainian children. In June, the 196-gram medal received by the 2021 co-winner reached $103.5 million paid BY an anonymous philanthropist, donated to a Unicef ​​program. The figure is 21 times higher than the previous record.

On April 12, 1888, Alfred Nobel’s older brother, Ludvig, died in Cannes, France. But Le Figaro was wrong and announced Alfred’s death on its front page with a short, murderous headline: “A man who can hardly be called the benefactor of mankind died yesterday in Cannes. He is Mr. Nobel, inventor of dynamite.” “.

What torments did this premature obituary cause Alfred? Many attribute the creation of the prizes to him, noting the echo of the formula chosen by Nobel to reward those who have made contributions “for the benefit of humanity”.

“But we can only imagine” because that incident is not mentioned in his correspondence, his biographer, Ingrid Carlberg, told AFP.

Visitors who came to pay their condolences to the inventor’s Parisian mansion were surprised to be greeted by a very much alive Alfred, according to… Le Figaro, the next day.

The Swedish physicist and chemist Svante Arrhenius, highly talented in many fields, received the prize for Chemistry in 1903 for his “electrolytic theory of dissociation”.

But it was other pioneering works that have earned him the status of pioneer today: at the end of the 19th century he was the first to theorize that the burning of fossil fuels, mainly coal at that time, caused global warming by releasing CO2 through the atmosphere.

According to his calculations, a doubling of the concentration of carbon dioxide would warm the planet by five degrees; modern models now give a range of 2.6º to 3.9º.

Far from suspecting the ever-increasing amounts of fossil fuels that humanity would consume, Arrhenius underestimated the rate at which that level would be reached and predicts that such warming would occur as a result of human activity…within 3,000 years.

With more than 120 years of history and a name known throughout the world, the Nobel Prizes have not lost their glory, although some consider them a bit old-fashioned, often choosing old discoveries.

After the Nobel Foundation rejected his proposal to create two new prizes for the environment and development, the German-Swedish environmental philanthropist Jakob von Uexkull created the Right Livelihood Prize, known as the Alternative Nobel Prize, in 1980.

The Nobels found a new, well-endowed rival in Silicon Valley: the “Breakthrough Prizes.” Already dubbed the “Oscars of science,” these Californian rivals to the august Swedish committees are endowed with $3 million, more than triple a Nobel.

What is the Nobel Prize? How many Nobel laureates are there? How to win it?