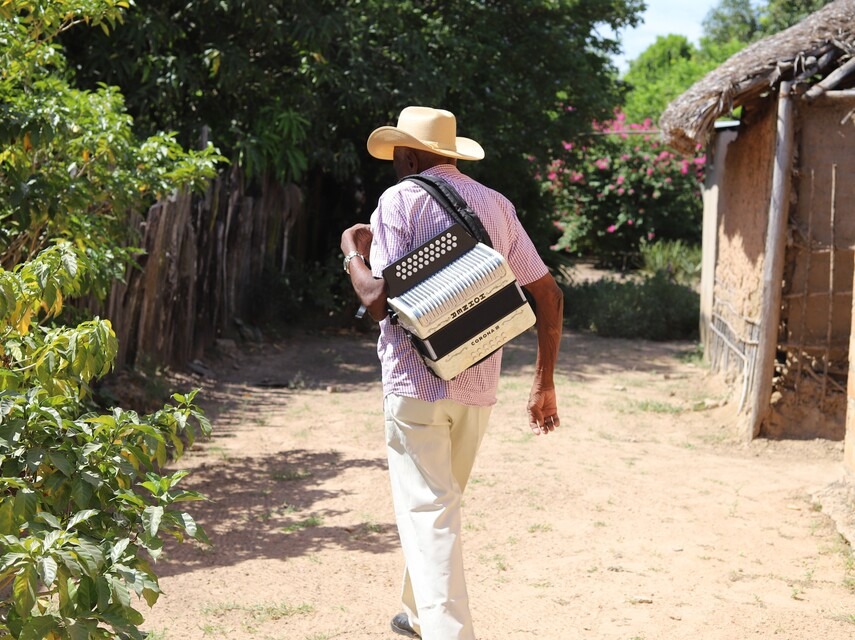 The month of April began and Valledupar has a special characteristic because the sound of an accordion, a box, a guacharaca, a verse and a partying voice make it possible for everything to have an atmosphere of the Festival of the Vallenata Legend, whose date will be from 26 to 30 April in tribute to Jorge Oñate, ‘La Leyenda’.

Precisely about the indisputable strength of vallenato, the Nobel Prize for Literature, Gabriel García Márquez, indicated: “I don’t know what’s so communicative about the accordion that when we hear it our feelings wrinkle.”

Similarly, the former Minister of Culture, Consuelo Araujo Noguera, noted: “When April begins in the midst of the harsh national reality, our accordion players, cashiers, guacharaqueros, composers, verseadores, singers and piloneras confirm to us once again that there are large companies, thriving, famous and rich, but that the best, the only company of the spirit that survives and is maintained despite everything and beyond everything, is called Vallenato Legend Festival”.

In turn, the president of the Festival de la Leyenda Vallenata Foundation, Rodolfo Molina Araújo, as the maximum event of accordions, verses and songs in Colombia approached, indicated that “for the vallenatos it is a transcendental date because it is the opening of the doors of Valledupar to receive thousands of visitors who come to enjoy the classic vallenato and the kindness of all. The Festival of the Vallenato Legend is the greatest identification of this land and the best way to expand our beloved folklore”.

When the month of April begins, the eternal circle of the return of minstrels appears, Reyes Vallenatos and all that broad family of folklore that puts the precise note to a music that was born in the corrals, and that today walks around the world. In this way, the event with the largest cultural gathering in the country is approaching, where a song called ‘Ausencia sentimental’ opens the windows of longing.

The story tells that, in Bogotá, it was the month of April 1977 when the law student Rafael Manjarréz Mendoza, could not travel to Valledupar due to lack of financial resources. He missed the Tenth Festival of the Vallenata Legend and this led him to catch a disease that has no cure and is called ‘sentimental absence’.

For the singer-songwriter it was not difficult to establish the conditions of time, manner and place to undertake the action of composing, because as in law there was a load of evidence that gave faithful testimony of the fact.

That absence saddened his soul and led him to give life to the song that nine years later became the winner of the Vallenato Legend Festival and, some time later, in 2010, was declared the anthem of the event. Those verses by Rafael Manjarréz were brought to sound paste by the singer Silvio Brito, giving him the appropriate intonation and feeling.

Rafa, as his friends call him, has intact in his memory those moments when he was sitting on the floor and had a guitar as a companion, managing to invite that close memory that later catapulted him into the Vallenato universe.

“The story haunted me when I remembered several colleagues who lived in an apartment in Bogotá, who agreed to come to Valledupar for the Vallenato Festival. Since I also wanted to be present, I called my father (Manuel Enrique Manjarréz) to ask him to send me money. His response was forceful. There is no money and stay put there, stop crazy. I wrote that in the song, ”he recounted with great nostalgia.

“I am dying to go and it is my duty to stay, I stay in the capital for things of destiny… Because the environment of my parents is so humble, that they give me to come and return in December. Locked up trembling I wrote a letter that details my sadness, my sentimental absence.

Rafael Manjarréz, the son of La Jagua del Pilar, La Guajira, at 62 years old, just turned 62, gets emotional talking about that event that he never tires of repeating because every year he lives in the hearts of thousands of lovers of vallenato folklore who various circumstances can only be seen on the balcony of memories where an accordion sounds in the distance and a voice betrays the never-ending sadness.

‘Ausencia sentimental’ is the anthem of the absent, it is the most faithful x-ray of nostalgia, the feeling in trance of the one who is far away and the living memory that seeks an equal or better present in the remembrances, but that upon receiving “the reasons of his companions, the anecdotes and the good stories that are customs there”, everything becomes different.

That piece of accordion

The history of this spectacular event began in 1968 glued to a ‘Pedazo de accordion’, where a young man born in El Paso, Magdalena, today Cesar, named Gilberto Alejandro Durán Díaz, made it sound and as a gift he composed a memorable song in puya air where he expressed all the magic he had. “This piece of accordion where I have my soul, where I have my heart and part of my joy”.

Exactly, the joy of the Festival of the Vallenato Legend contains the entire legacy of its creators, the musical exploits of the minstrels, the perseverance of the Vallenato Kings, the love of children and young people for folklore and the song of the composer Hortensia Lanao de Roso, who in his winning work in 1995 entitled ‘What am I doing, Lord?’, expressed: “I want times to come back, those moments of happiness. I want to open their chests, sow feelings, erase the evil”.

With the previous folkloric dissertation, the traditional and emblematic event of the Vallenata culture will be launched, the musical genre that represents the diversity of the country where Kings and Queens are elected who spread a folklore through their accordion notes, songs and verses that from Valledupar is the smiling face of Colombia before the world.

With more feeling! The Festival of the Vallenata Legend returns this April