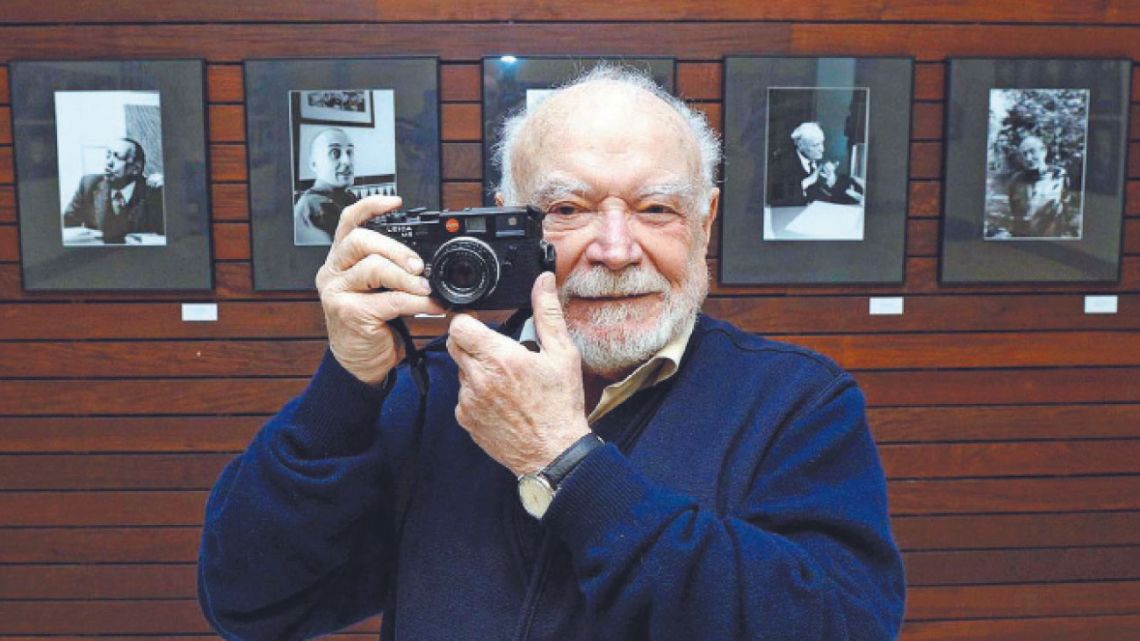 “Black and white gives me much more freedom than color. Color is like a prison for me, it adds an unnecessary element to photography. The fact that this man’s sweater is blue or red does not matter to me (and points to his photo of Ernesto Sabato). The photo is abstraction, it is two-dimensional, reality is multidimensional”. In this way, Mario Muchnik presented the exhibition Literary Portraits at the Cervantes Institute in Frankfurt in 2008. It consisted of 58 photographs of writers and thinkers of the 20th century. As a good editor, he corrected the title, it seemed more pertinent to call them “Literary Experiences”, because with his Leica camera, which he carried everywhere, he took them by surprise, without the poses of those portrayed.

His last photos of Cortázar were taken in 1983, in the mountains of Segovia, and he called them “The last summer of July”. In one of them he appears reflected in the round sunglasses, Isabel Perón style, that the writer wore on purpose. In his own way, he wanted his editor to be on the scene like Diego Velázquez in Las meninas. Last Sunday, Mario Muchnik passed away in Madrid, at the age of 91. In addition to the trajectory, it is worth rescuing the trace of his passage in the history of literature, which some call intuition, but of which we can think of the intellectual character of the editor of a book, how it has a late effect like signal, reviving a work or marking the destiny of new readers and writers.

It is that in the photographic definition of the principle nests the essence of the editor’s trade: the page has the white of the paper, the typography the black of the ink, and the result is a range of successive contrasts that make up the act of reading; there the artifice of time is consolidated, which can generate delay, a trip to the past, others to the future. In itself, acts of imagination. And perhaps for this last reason, the book endures as an analog paper object despite technological advances. Muchnik’s editorial predictive character became evident with the last Nobel Prize for Literature: in the 1980s he was the first to publish in our language the novels Paradise and Precarious Silence, by Abdulrazak Gurnah. In 1981 something similar happened with Elías Canetti, when he won the same award: he had published three titles by the Bulgarian of Sephardic origin that were sleeping in the warehouse, a success that later breathed an air of indispensable sales into his publishing house in Barcelona.

He captured all this in almost twenty books, between autobiographical and technical. In the worst they are not the authors. Editorial autobiography 1966-1997, recalls dealing with authors such as Italo Calvino, Elías Canetti, Bruce Chatwin, Julio Cortázar, Primo Levi, Ismael Kadaré and Amos Oz, among others, that is to say that there he writes portraying, while throwing to the ground the disastrous legend: “Writers are unbearable”.

From his editorial wisdom Edit War and Peace is masterful, there he publishes his appreciations and letters with the translator around Tolstoy’s classic. With Editing-Art of putting the dots on the i’s and spreading them; Test bench: working memories, 1949-1999; Style rules (and a later update), and Editorial Lexicon: for the use of those who still believe in cultural publishing, books published between 2000 and 2002, bears witness to the essential rules for style editing (pulling with authors, bitter non-stop combat) and editorial editing with page proofreading, something that should be mandatory before authorizing an ISBN number, at least in Argentina. For more prestige, she cultivated a deep friendship with editors such as Giulio Einaudi and Carlos Barral, which accounts for her attractive personality and good manners.

The fundamental aspect is training, between academia and practice. Muchnik, after secondary studies in Buenos Aires (he was born in Ramos Mejía), obtained in 1953 a degree in Physics at Columbia University, a doctorate at the Università degli Studi, and was a professor at the Institute of Nuclear Physics, both in Rome , until 1966, when he opted for photography and, after portraying May 1968 in Paris, he devoted himself to publishing with his father, Jacobo Muchnik, who established a publishing house in Buenos Aires (1955) that would later take the name from Fabril Editora, where he published, among others, Rafael Alberti, Witold Gombrowicz, Franz Kafka, Arthur Miller and Ernesto Sabato. Of Eskenazi Jewish origin, they emigrated from Argentina like their ancestors from Russia; Jacobo forever marked the Argentine publishing environment, and both, the Spanish market.

With Muchnik went a model editor and photographer