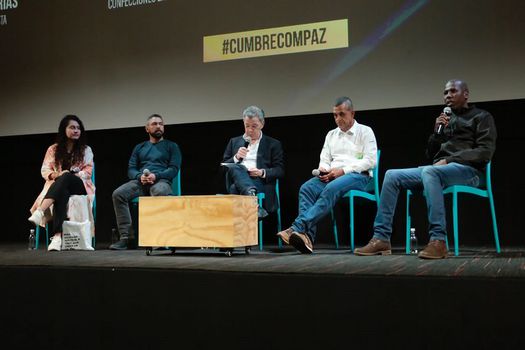 Former President Juan Manuel Santos moderated a meeting between peace initiatives supported by the Compaz Foundation, which celebrated its fourth anniversary this Wednesday.

Former President Juan Manuel Santos reappeared this Wednesday, within the framework of the fourth anniversary of the foundation he created after receiving the Nobel Peace Prize, to defend the implementation of the peace agreement signed in November 2016 with the Farc and to insist that the bet of ‘total peace’ of President Petro cannot set aside the pact reached in Havana.

Read: Six years after the signing: “the Peace Agreement is reborn at the Teatro Colón”

“We had four years where the government was not very enthusiastic about the implementation of peace; This government has promised that it will implement the peace agreement in its entirety, if it does so it will go down in history, because with the mere implementation of the peace agreement with the FARC many of the problems that this country has are resolved,” he said. said the former president.

In fact, the former president went further: “Without the implementation of the Peace Agreement with the FARC, ‘total peace’ would be a failure.”

Also read: In figures | Six years of the Peace Agreement: how is its implementation going?

The statements were made by the former president in commemoration of the four years of existence of the Compaz Foundation, which he created with the resources of the Nobel Peace Prize, which he was awarded in 2016. To commemorate its fourth anniversary, he convened a meeting of various experiences and peacebuilding initiatives that the foundation has accompanied during these four years.

In the words of the former president, he created Compaz because he knew “that building peace is more difficult than signing it” and that is why since the foundation they have tried to join efforts “so that those who want to build peace can have that opportunity.”

The meeting was attended, among others, by a series of local peacebuilding initiatives that realized that despite the attacks that the agreement has suffered, efforts from civil society, academia or social organizations have kept it afloat. Manifest, the fashionable venture of some students from the National University who work together with ex-guerrillas of the Farc; o Confecciones La Montaña, a textile enterprise of the ex-combatants themselves in Antioquia, were two of the examples of projects that today are successful despite the adversities to implement, for example, reincorporation.

We recommend: Six years of the Peace Agreement: this is how the children of ex-FARC combatants portray it

In fact, Martín Batalla, leader of Confecciones la Montaña and ex-combatant of the Farc, reiterated it during the meeting: “It does not help us that we are selling our products successfully if the partners of our project are being assassinated.” He referred in particular to the case of Robin Muñoz, fireplace, ex-combatant who belonged to the project and who was murdered last July in Campamento (Antioquia).

Javier Uribe, representative of the Association of Cassava Producers and Marketers in Puerto Guzmán (Putumayo), also reaffirmed his commitment to defending the agreement, but maintained that the State failed to comply with the families that lived from coca in that area and signed the crop substitution program of the Peace Agreement. The leader assured that of the nearly 2,700 families that subscribed to the program in his municipality, 80% went back to planting coca, “because we simply have to feed the families.”

In addition, the leader drew attention to the humanitarian crisis in Putumayo due to the confrontation between different armed groups, several of them derived from the former Farc. According to him, the coca that is planted in Putumayo is at the root of the conflict between these structures.

Faced with this complaint, former President Santos maintained that he has asked the Petro Government to fully implement the Peace Agreement and in particular the security guarantees that are agreed therein. He emphasized bringing to fruition the first point, on rural reform, and the fourth, on the drug issue.

During the meeting, there was a particular gesture between former President Santos and Rodrigo Londoño, Timochenko, who was also present. After receiving from Sara Arias, founder of Manifesta, a gift with garments from that peace undertaking, the former president gave it to Londoño as a “Christmas present”, for whom he was his enemy in the war and with whom he signed peace six years ago.

“Without implementation of the Peace Agreement, ‘total peace’ would be a failure”: Santos