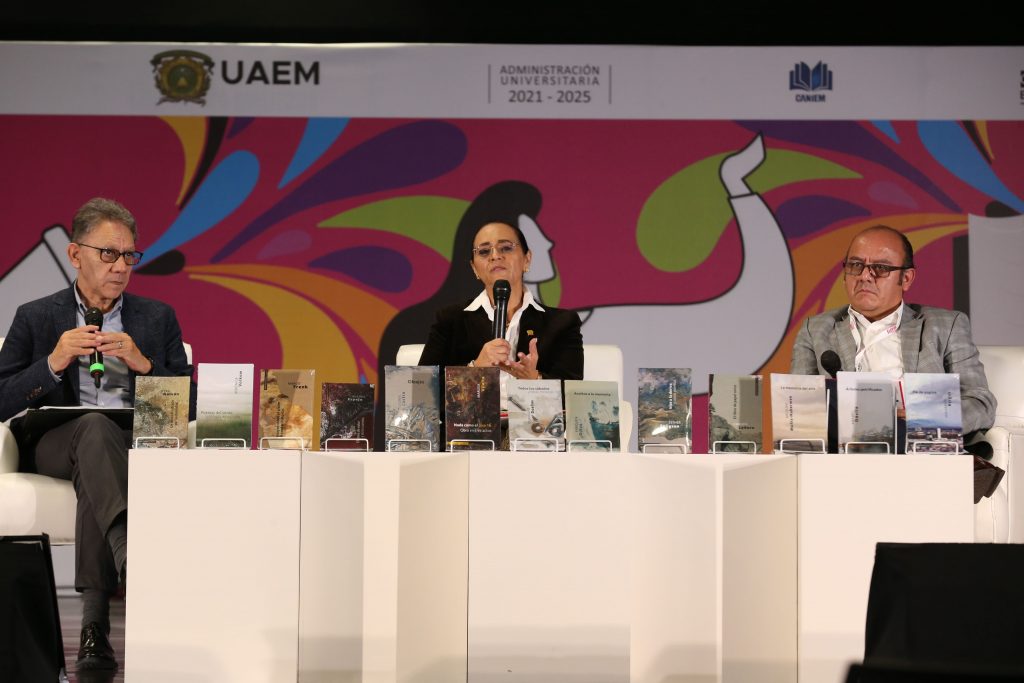 · This editorial effort of the UAEMéx and the Editorial Board of the State Public Administration is made up, so far, of 13 titles of short stories, poetry, essays and dramaturgy.

· In addition, the winning books of the international awards for Narrative “Ignacio Manuel Altamirano” and Poetry “Gilberto Owen Estrada” of the Mexiquense Autonomous were presented.

Toluca, Mex., August 28, 2022.- During the second day of activities of the State of Mexico International Book Fair (FILEM), the Women, Reason and Future Collection was presented, an editorial effort of the Autonomous University of the State of Mexico (UAEMéx) and the Council Publisher of the State Public Administration, in addition to the presentation of the winning books of the international awards for Narrative “Ignacio Manuel Altamirano” and Poetry “Gilberto Owen Estrada” of the Mexiquense Autonomous.

At the FILEM Forum, the secretary of Cultural Dissemination of the UAEMéx, Mercedes Portilla Luja, and the head of the Council, Alfredo Barrera Baca, reported that said collection is made up, so far, of 13 titles of short stories, poetry, essays and dramaturgy.

In this context, Portilla Luja affirmed that the role of women as writers goes beyond their dimension as muse or character, since it is an important reflection of the emotional and symbolic construct of collective culture.

He referred that from 1901 to 2021 the Nobel Prize for Literature has been awarded to 118 people and only 16 of them have been women, so in the field of literature, as in many others of human life, the participation of women must be promoted.

Finally, he considered that the Mujeres, Razón y Porvenir Collection will be “a benchmark in terms of disseminating literature written by Mexican women and is, from now on, an invitation to change the world of literature from literature and with literature.”

In this same forum, under the moderation of the writer and editor Mónica Soto, Carlos Alberto Reyes Ávila and Yonnier Torres Rodríguez, winners of the international prizes for Narrative “Ignacio Manuel Altamirano” and Poetry “Gilberto Owen Estrada”, they presented the books The year of my spiritual autism Y The bird making machine.

During their presentation, and at the invitation of Soto, who was also part of the jury for the Poetry Prize, Reyes Ávila and Torres Rodríguez spoke about their creative process, as well as the books and music they like.

Mónica Soto maintained that Carlos’s work stands out for its narrative fury, for a frenetic character; Meanwhile, Yonnier’s -of Cuban nationality- is a celebration of everyday life, a hymn to freedom

It should be noted that within this framework, a recognition was given to the winner of the Honorable Mention of the International Prize for Narrative “Ignacio Manuel Altamirano”, the Colombian Hellman Pardo López, author of Diary of a war correspondent.