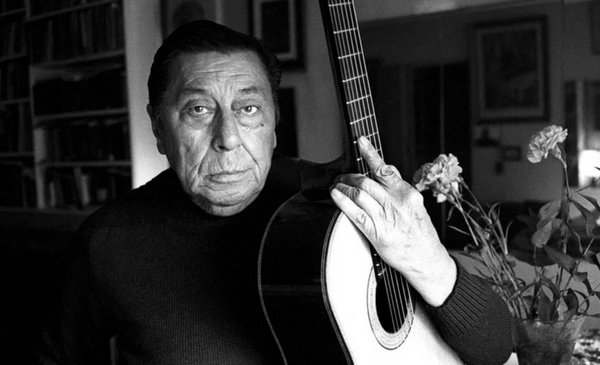 By Rodolfo Braceli, From Buenos Aires. Special for the day

Excuse me, I’m going to interrupt the holiday fun, with a little thought. For example, right now a question arises: if Bob Dylan won and deserved a Nobel Prize for literature, why the hell wouldn’t Yupanqui have deserved it? (I mean, in the case of not having been sent to change from this world to the other). By the way, let’s say that Don Ata at the end of recent January turned 112 years old. Age of successive poetry with songs through.

I return to words already watered in this column. This character with an imposing name is an Argentine who, with poetry transfigured into songs, went around the planet several times. Surly, ironic, haughty, severe, sure of his gifts, already in adolescence he decided to call himself Atahualpa Yupanqui. Nothing less. But he was born called Héctor Roberto Chavero. That pseudonym, epic, nested a deep poet.

In the early ’80s, I interviewed him for Siete Días magazine. I came from six long, very long years, of not being able to write for the Argentine media. In those days a phrase was fashionable: “Silence is health.” In reality, keeping one’s mouth shut had become a widespread patriotic habit. But, of course, there are wise silences and there are oppressive silences. In that report with Yupanqui we were going to talk about the other silence, the essential one. I now return to a fragment of the chapter I dedicated to him in my book “Caras, caritas y caretas” (Sudamericana, 1996).

Don Ata scares you. As soon as we agree on the interview, he tells me emphatically: “Look countryman, let’s understand each other: we’re going to talk, but about folklore! If you know about that, the talk will be until dark. If you don’t know, it’s going to be over quickly.” Folklore is not my forte, but I won’t admit it. And now I’m on my way to that man who becomes more imposing because of that booming voice that comes from inside his mountain, from his body dressed in blue and a punctured tie. At the time of the report I feel more afraid than usual. Perhaps in minutes the conversation will have foundered. Don Ata comments: “Wow, this day was misplaced: it seems like summer: a lot of humidity.” The unbearable humidity unexpectedly helps me to stir up the talk:

–Víctor Delhez, a Belgian artist who lives in Mendoza, maintains that great cultures have emerged from very humid areas.

“I haven’t been looking at that. I can only say that Canal Feijoó was not born in a humid area. As for Delhez, what a coincidence, we are old friends. He is a great world engraver. From time to time we write to each other and ask: “Are you still living?” “Yes? Well, go ahead.” Delhez, total artist.

– What does it mean to be an artist?

–In searching hard for the light. Every candle artist shades it with his hand. So that it doesn’t turn off. That is the mission: to be essential artists, not formal. An artist has no need to have long hair on his shoulders, nor to dress strangely… You see, the artist is a seeker. There are fewer seekers than he seems.

– Is Borges an artist?

-Borges is an exceptional seeker.

–Simple: countryman is the one with landscape inside.

–And can you be a countryman being a city bug, with glasses?

-Of course it can! The glasses don’t matter. There is another way of looking, inward.

–This world in which we live, does it help the gestation or the disintegration of the countryman?

-And… I don’t know, I don’t know… (sly, look through the slit of his eyes) The media phagocytize. They give the form, they remove the essence. There are many sophisticated forms of what we call “civilization”, and they still sell us little mirrors and glass necklaces… With a stone ax, which is not stone, they are cutting the umbilical cord that unites us with the mysteries from the earth.

“Is there a way to get that cord back?”

–There is always a way… That is the question: how to return to earth, how to yapar, how to add, how to tie that cut cord without being noticed…

– That, the welding. Such is the inescapable question that we must face: what will be the material element that can unite the cosmic of man. But there is something certain; nobody can choose for one. One has to choose the way back.

–What would the world you seek be like, Don Ata?

–A world similar to the one valued by the Hindu philosopher Jinajharadasa. He couldn’t explain how, instead of building upwards, we didn’t scatter the city towards the pampas. Jinajharadasa said that heroes on monoliths are unattainable. Our Lavalle was one meter sixty… any twelve-year-old boy would be at Lavalle’s height if the statue wasn’t so tall. And the child would say: “If I study and work, I could be like this great hero.” Leveling the heights of statues and men we would be more familiar with the best. The man needs to be able to palm the bronze. In such a world everything would be less crude, sophisticated and violent.

–In your life, do you keep, without healing, an episode of violence?

–… Very distantly I remember… It is about a man I saw die, on his knees, hugging his horse… He was a friend of my family, he had received two shots in the back. The horrified amazement of that still haunts me.

-From your father, did you ever receive violence?

-My father… I like to name him, he was a very sensitive guy. Intelligent and severe, very measured… I’ve done ten thousand pranks, those of all the boys and some more. But I never got slapped. He called me, I planted myself in front of him, he told me: “Stand up straight”. He asked me: “Tell me, what happened?” And then he punished me in the worst way: “I congratulate you, friend… Go on, go on”. That’s how my father was.

-The mentioned God, for you, what is it?

-A profound mystery. I have a lot of mistrust of the merchant who recommends the same yerba to me every day because it is what he wants to sell me. I believe in that phrase of the prophet Isaiah that says: “God is the one whom only silence names”. I believe in that. So here, period. Let’s not mess around anymore. Period eh!… It seems to me, paisanito, that now we need a sherry.

–Since we are… in the poor city, seeing how people hurry not to live.

Postscript: I take this opportunity to recommend reading the poetry of Atahualpa Yupanqui. Poetry made of pure synthesis, worked in the forge of the deepest silences. That nothing has to envy the poetry of that other singer-songwriter, Bob Dylan, the one who got the Nobel Prize for literature to pay attention for once to his poems transfigured into songs.

Silence then. Silence has the word. Especially in times when noise is confused with sound, and makeup with the face, and flatness with the level of the sea.

To all this: What’s poetry? Poetry is the abyss between word and word. Don Ata, he sowed the abyss with the words, always unique, of silence.

Yupanqui Nobel Prize. Yes, why not?