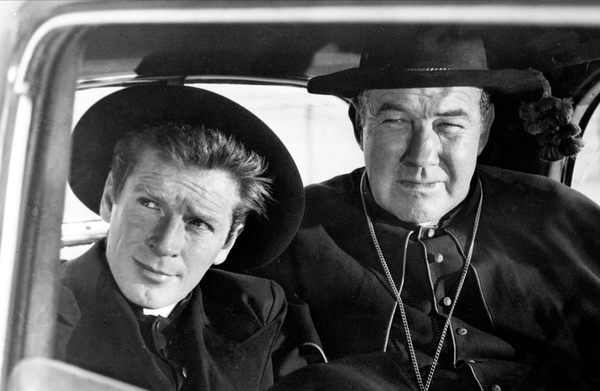 Augusto, Roberto and Picasso, three sleazy crooks, roam Italy in search of new victims. Their favorite trick consists in disguising themselves as clergymen to deceive certain overly gullible faithful. But Augusto, the oldest, begins to be tired of this existence. Tired, he feels that the hour of the last swindle is near…

He Bidone (the scam in Lombard slang), written and directed by Federico Fellini just after his Oscar-winning work La Strada (1954), is his fourth feature film as a sole director. From his very first films, the filmmaker laid the foundations of his very personal style, combining a neorealist social vision of the poorest and an approach tempered by a touch of fantasy and melancholy. Already admirable in La Stradahis inventiveness and his unique way of depicting the acts of his characters, surprised in their greatest moral ambiguity, are at work in He Bidone with exceptional art of staging. The analysis of this dramatic comedy shows that each subset (each scam) can function independently, as a plot in itself, because the filmmaker is capable, for each of them, of considering and showing the various explanatory levels. This psychologically absolute approach plunges the spectator into the depths of the ignominy of the trio of amoral hustlers and a perfect example of the turpitude into which humanity can sink. To embody these “bidonists”, Federico Fellini will have an eclectic cast. Augusto Rocca, the oldest, is played by the American actor Broderick Crawford (Humphrey Bogart was considered for a time) hired for his physique and who will deliver a memorable composition, despite his permanent drunkenness on the set. The good nature of his demeanor contrasts sharply with his appetite for the spinelessness of twisted and immoral blows. These constantly destroy all hope of redemption, although this character realizes that things and actions have a certain price in society. However, even the existence of his daughter Patrizia, a hardworking, charming and upright person, played by Lorella De Luca, does not seem to be enough for his redemption. The same goes for Roberto, played by Franco Fabbizzi, who is invested body and soul in unscrupulous “bidonism”, which makes him suitable to profit to satiety from the cowardice and greed of human nature. The last member of the trio, the youngest, is Raoul, known as “Picasso”, subtly played by Richard Basehart, who inspires the most sympathy with his affable exterior and his generosity. Yet, despite the humility and total love of his lovely wife Iris (Giuletta Masina), he will struggle to stop participating in the profitable scheme of scams. Indeed, the picture of society painted by Federico Fellini is hardly flattering, between the society of pleasure (reception with Rinaldo) and profiteers leading the high life, a source of inspiration for crooks, and that of the underprivileged, peasants and cripples (like Suzanna played by Sue Ellen Blake) whose ignorance (a cassock is enough to materialize a usurped function and fake jewelry is quite misleading) benefits the trio’s shenanigans. Although partially anticipating The good lifePalme d’Or at Cannes in 1960, He Bidone is on the other hand a failure in Venice, which obliges Federico Fellini to mutilate his misunderstood film whose pessimism, however anchored in its time, had displeased the critics and the public. Since then, the film, which has regained its full editing, has been rehabilitated and its modern and visionary dimension on social evolution no longer needs to be demonstrated. We must admit, with Jacques Rivette, that He Bidone is indeed a masterpiece of the Maestro.

Film restored by La Cinémathèque de Bologna in collaboration with Titanus and L’immagine Ritrovata. Project financed by the George Lucas Foundation and carried out for the centenary of the birth of Federico Fellini.
This restoration aims to present the film as it was screened at the Venice Film Festival in 1955. Under pressure from the producers, Fellini had to cut several sequences after this screening. The image restoration was made from the original negative in a shortened version and a vintage copy (fine grain positive) to reintegrate the cut scenes. The sound elements have been restored from the 35mm sound negative and a vintage 35mm copy of the optical track. All elements were provided by the Titanus. Project carried out with the participation of the Italian Ministry of Culture.

His : monophonic Italian 2.0 mix, very clear dialogues with the inevitable delay of the usual Italian post-synchro, excellent dynamics on the (urban) atmospheres and on the typical score by Nino Rota; VF 2.0 monophonic, clear and dynamic but to forget, despite a suitable dubbing not free from defects, for its artificial character

Blu-rays and DVDs available on Amazon

a tragicomic masterpiece by Federico Fellini (on Blu-ray and DVD)