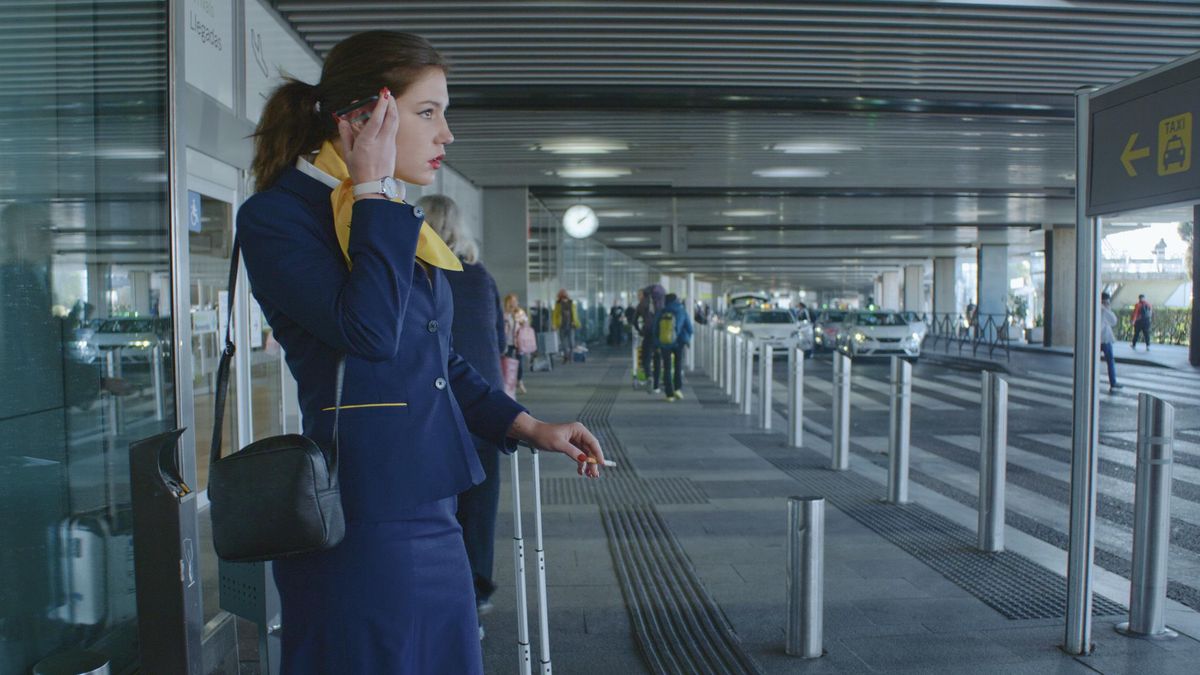 The actress, revelation of “La vie d’Adèle”, is dazzling in “Rien à foutre”, a film which tells the daily life of an airline flight attendant.

Nine years after her Palme d’or obtained at the Cannes Film Festival with Léa Seydoux for “La vie d’Adèle”, the only Palmes d’or in the history of the festival awarded to actresses – and it was Steven Spielberg, then president of the jury, who had made a point of rewarding them -, Adèle Exarchopoulos finds in her latest film, “Rien à foutre” (currently in theaters), her most significant role. Totally moving and with phenomenal accuracy, it portrays a somewhat lost low-cost airline stewardess, who flees reality – in particular the death of her mother – by multiplying trips, parties and shots. one night.

By immersing us behind a fascinating backdrop, of which until now we have only known the tip of the iceberg, the film imposes itself as a Polaroid of the modern world, that of a certain youth. From Morocco, where she is recharging her batteries before preparing for the Cannes Film Festival, where she will present two new feature films, the actress tells us about the amazing shooting conditions of this film on the borders of the documentary.

We only see you in “Rien à foutre”. From the first to the last frame, you carry it admirably on your shoulders… Did you expect to have such a presence?

No not at all. For the simple and good reason that Emmanuel Marre, one of the two directors, whom I met first, had been very clear from the start: he did not want to follow a precise scenario but to reinvent everything according to the meetings, having total freedom during filming and improvising a lot… I had seen one of his short films which took a look full of humor and depth at our generation and I had total confidence in him. Just like Julie Lecoustre, her partner, whom I met later.

At first, both were considering giving the role to a real flight attendant. What made them change their minds?

I don’t really know… They actually met hundreds of air hostesses before we found each other. I had also been warned: “It is not certain that you will have the role, perhaps they will find the hostess of their dreams”. And then with Emmanuel, during this meeting, we liked each other… They still asked me to do some tests, in a small hotel room, on the Brussels side, all made up with a hostess costume, to be sure of their shot… He wanted to see how I carried the ritual of loneliness of an air hostess who gets up at dawn, unable to have an emotional life…

You then took training courses. How was this immersion phase?

I left with a low-cost company to do empty leg flights: Paris Madrid, Madrid London, London Paris… And I dived into the underside of these flights, in terms of preparation, security, pressure of numbers to sell as many products as possible for the passengers… That’s when I started to understand one of the essential elements of the character: this notion of having no hold on the present… One day, we were about to take off and I get a phone call from my young son’s school principal, who usually only calls me when there’s a problem. And there, for 3 hours, in the middle of the flight, I realized that I couldn’t do anything for him or for the people I love. I couldn’t talk to him, couldn’t act… We suddenly realize the constraints of this profession, and the impact of these on their lives.

There is also this notion of the mask, very present in the film, that these hostesses must display, of perpetual representation… Is there a parallel to be drawn with what you sometimes experience as an actress?

A little yes. In the air, they must disconnect from reality, forget their problems and smile no matter what. Not to mention those passengers convinced that they will soon die and that you must reassure. And with the exception of this last point, when we actresses find ourselves on a promo, we are asked the same thing: to take a certain posture for the photos, to be pretty, with a smile on our lips and also to forget our worry. Moreover, to show you how important the notion of the mask is, I remember that when I became pregnant, after the Palme d’or at the Cannes Film Festival for “La vie d’Adèle”, I could not find no more roles and I went back to work in my father’s little sandwich stand, where I worked before breaking into the game. And for people, it was just inconceivable that the glamorous actress they knew would sell them popcorn. When they told me that I looked like him, no matter how much I told them that in fact, it was really me, they were convinced that I was telling them nonsense: “You talk nonsense! Come on, put me some M&M’s with that…”.

The filmmakers mentioned filming sometimes hastily in airports… In concrete terms, how did it go?

We would arrive in the morning and I would go to the toilets to change and do my make-up… For certain airports, in particular that of Dubai, we did not have authorization to shoot. So we pretended that we were doing scenes for a wedding between us. There were a lot of stolen or rushed moments.

How does improvisation work?

Already, you need directors who know how to put you at ease enough so that you can completely abandon yourself. And it was. Afterwards, they asked a lot of hostesses or flight attendants to play their own role and it immediately creates something extremely natural. We also shot during real flights where the production had offered passengers to travel for free in exchange for being filmed. As for the party scenes, we were totally encrusted in real fiestas. After all, not everything was improvised. We still had a script, with a few key scenes written that had to be respected.

Do you identify with this lost youth portrayed in the film, who only has Instagram or Tinder as a real landmark?

In part, yes, because I know how society works today, where everything is consumed very easily, where everyone constantly seeks approval. I practice social networks, Instagram often for my work, and it has very good sides. Afterwards, it’s already starting to scare me for my son. I don’t want him to fall into it too young. However, I am unable to do a Tinder. I’m not judging, I’m sure there are great love stories on that side too, but when it comes to feelings and encounters, networks, it’s not for me.

Last year, “Rien à foutre” was presented in the Critics’ Week selection at the Cannes Film Festival, where you will be present twice this year, with “Smoking makes you cough”, by Quentin Dupieux, in the Official Selection, and with “The Five Devils”, by Léa Mysius, at the Directors’ Fortnight. Are you rejoicing? Can you tease these two films for us?

Cannes, it all depends on who you share it with. If my best friends are there, Leïla Bekhti, Tahar Rahim, Géraldine Nakache or Jonathan Cohen, I know I’m going to have fun, yes. Afterwards, for the films, I have not yet seen “Smoking makes you cough”. I only want a small role in it, but it’s still a very wacky film, with a team of fallen superheroes who must go green to tame their fears by telling stories. And “The Five Devils” is a fantastic film where I play a young woman who lives with her husband and daughter in a village. And this child has powers allowing her to go back in time through smells and she will notably revisit her mother’s past…

Adèle Exarchopoulos: “I dived into the underside of low-cost flights”