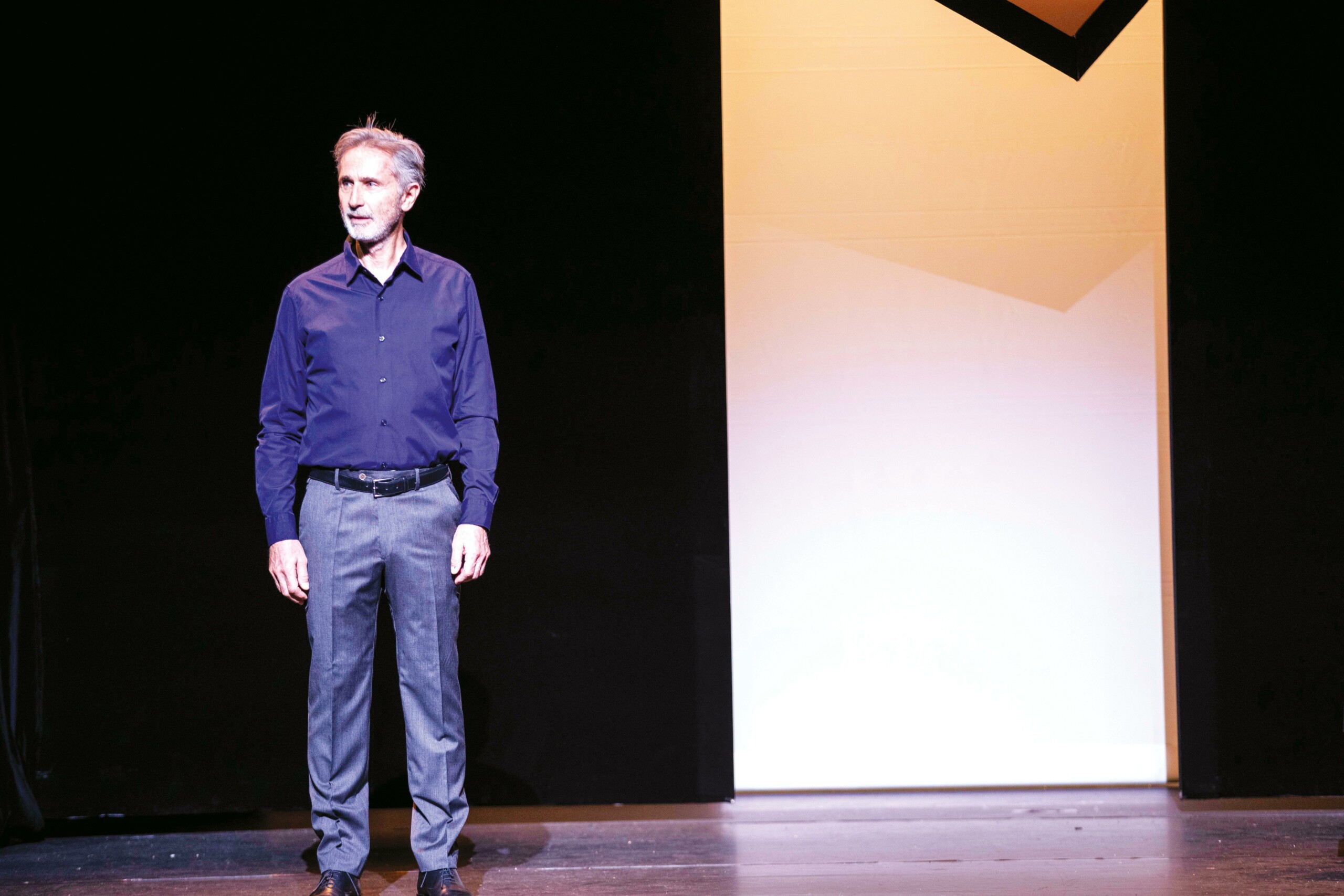 The popular culture, accessible to all, and in diversity. These are the watchwords of the new cultural season 2022-2023 of Cahors and Grand Cahors, in the Batchwith a program unveiled this Friday, September 9, 2022.

And the headliners are numerous, as Thierry Lhermitte, Jacques Gamblin, Francois Morelwho will begin to be a regular at the Cahors theater or the actress Barbara Schultz.

This year again, all styles will be represented at the theater with plays of course, but also dance, music, works for young audiences… As for the musical season in the auditorium, again jazz and classical will delight music lovers with some big names expected.

On the theater program

The season opens thursday 17 November 2022 at the theater with the play “Rencontre avec une illuminée”, a big favorite of the director of cultural affairs and theater programmer Anne-Laure Czapla. The actor François de Brauer embodies all the characters with an imagination and communicative cheerfulness.

the 29 November 2022, the piece “Me Daniel Blake”, from Ken Loach’s film Palme d’Or at Cannes in 2016, will be rescheduled after a two-year wait following the health crisis. A political and social theater for a moving play.

Thierry Lhermitte will be alone on stage in “Sun Flowers” thursday 15 decemberin a strong piece written by Simon Wiesenthel, survivor of the Shoah, on the theme of forgiveness, while an SS man asks a Jew for forgiveness.

The year 2023 will begin in music with Dominique A wednesday 11 January. This big name in rock, considered one of the founders of the new French scene, is releasing his 14th album “Le Monde réel” on September 16. He notably won the Victoire de la musique for male performer in 1993 and signed titles for the greatest of French song like Alain Bashung or Étienne Daho.

Another favorite of Anne-Laure Czapla, the radio play “Zaï zaï zaï zaï” tuesday 17 January 2023, based on Fabcaro’s best-selling comic. A moment that is both funny, absurd, ironic with a political and social reading, note that the evening will end with a stage edge for an exchange between the public and the artists.

Each year, a classic play is programmed by the Cahors theatre. This year, Le Tartuffe by Molière will be on stage tuesday 24 Januarya classic text but in a modern staging with the young actors of the Atelier du Théâtre de la Cité in Toulouse.

Tuesday 31 Januarymake way for dance with the 2021 creation of the Prejlocaj ballet “Deleuze/Hendrix”, where when the philosopher Gilles Deleuze meets the powerful music of Jimi Hendrix…

Always dance the 4 february, in a completely different style. Hip-hop, a fusion between breakdance, modern dance and new circus, takes the stage as part of the Year of Denmark with “Viking runes”, a performance inspired by Viking mythology in the gestures of combat.

The actress Camille Chamoux will then be alone on stage on 9 february in “Le temps de vivre”, directed by Vincent Dedienne. A funny and endearing work with a new look at the world and the passage of time…

Thursday March 2, will be presented the play at the three Molières (including that of the best comedy) “Berlin Berlin”. Eight actors on stage want to cross the Berlin Wall, to go from East to West, but with what success? That of humor certainly!

Another show rescheduled due to the health crisis, “Meet Fred”, monday 13 march, in English with French surtitles. A funny and sensitive puppet show about difference, in line with the absurd humor of Monty Python, to see with the family from 13 years old.

Jacques Gamblin, who was to come to Cahors two years ago, will go on stage this year in “Hop! ” the 16 marchwith the dancer Raphaëlle Delaunay, for a body to body mixing theater and dance.

New favorite of the season’s programmer, the play “Incandescences” by Madani Compagnie which makes the voice of youth speak about the first experiences of love, friday 24 march. A piece at the same time played, sung and danced.

Crazy musical humor as we like it with “BlØnd and Blönd and Blònd” thursday 30 march, where French songs are rewritten and reinterpreted with Swedish sauce for very free and funny adaptations, a French touch java-musette in the far north!

Barbara Schultz in William Shakespeare, it’s “As You Like It”, wednesday 12 april. A modernized translation of a text on love, friendship, jealousy, which received no less than three Molières, including best actress for Barbara Schultz and best supporting role for Ariane Mourier.

The season will end on 3 may with the return of François Morel to the Cahors stage in “All sailors are singers” with sea shanties that completely inflate the sails of humor and poetry.

Reservations for subscriptions are available from Saturday September 10, 2022 at 10 a.m. on the cultural season website or by mail to be dropped in the mailbox which will be placed at the entrance to the theatre.

Individual ticketing will be available both at the Cahors theater and online from Wednesday, September 14 at 10 a.m.

All evenings start at 8.30 p.m. except for shows for young audiences which are at 6.30 p.m. Information and ticketing at the Cahors theater or at www.saisonculturellecahors.fr

The theater has a special program for young audiences, including the wednesday 25 January 2023 at 6:30 p.m. at the Espace Valentré “The migratory bird”, a story drawn live on stage evoking the friendship between a child and a bird, a visual and poetic tale for children from 8 years old.

Then, Wednesday 15 februarya duo of acrobats will mix dance and circus in “Ziguilé”, while evoking complicity and rivalry.

Alice in Wonderland, dance version, this is the program of “Wonderland” Wednesday, March 8, between enchanted and nightmarish space, in a country where everything is possible. A family show for children over 11 years old.

the wednesday 5 aprill, the company La Bobêche, will present at 5:30 p.m. (and not 6:30 p.m.) at the Valentré space of the theater of objects without words in a dreamlike universe with “Du Balai”, for the youngest children, from 4 year.

Classical music and jazz in the auditorium

The Cahors auditorium offers a program of jazz and classical music.

Two great jazz groups are expected: Phil JL Robert with his 10 musicians from Boogaloo Station, the friday 25 novemberwith jazz from New Orleans inspired by the Boogaloo movement of the 1930s. Note that they will host an activity in the schools of Greater Cahors as well as a masterclass with the Docks.

Then Laurent Bardainne and the Freshwater Tiger friday 20 Januarya quintet in the jungle soul and rhythm and blues style, a mix of jazz and African rhythms.

Jazz again with Valérie Garchaire who will be on the auditorium stage friday 31 march with his latest album “Wrap it up! “. Sinne Eeg, one of the greatest singers of the Scandinavian jazz scene, will perform on the Caduran scene as part of Denmark’s year on 14 april.

On the classical side, the Elements Chamber Choir will come to celebrate winter in “Winter Serenade” on Friday, December 9, a musical journey combining songs, poems and sacred polyphonies.

Then two soloists will be in recital: pianist Adam Laloum on March 10 with a program around Schumann and Fauré; and violinist David Grimal on May 12, with a program both rich and diversified around Bach and Bartók, for a moment of poetry and pure music…

This year, the theater still offers meetings outside the walls with the Bols d’Air in the municipalities of Grand Cahors: Boissières, Mercuès, Bellefont-la-Rauze or Labastide-Marnhac. The Cultural Getaways bring the shows directly to the heart of the city’s districts.

In addition, 5 artist residencies will take place over the months at the theater, and the theater will be open for visits on the occasion of Heritage Days.

Finally, and this is new this year, the Cahors theater has set up a partnership with the Théâtre de la Cité in Toulouse to bring the public from Cahors to see directly in Toulouse the play “L’île d’or” the 19 november.

Information and ticket office at the Cahors theater or on www.saisonculturellecahors.fr

Was this article helpful to you? Note that you can follow Actu Lot in the My Actu space. In one click, after registration, you will find all the news of your favorite cities and brands.