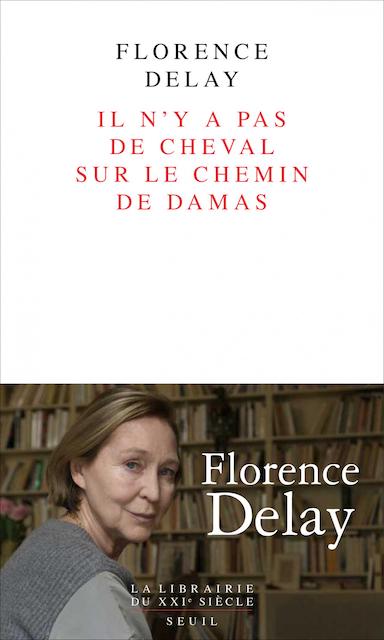 On found in There’s no horse on the road to Damascus a construction dear to Florence Delay, that of “brief seduction”, of “small forms in prose” which decline the same idea by following multiple directions.

The point of departure is the conversion of Saint Paul and the fact that at no time in the Gospel corpus has Saul or already Paul been knocked down from a horse when Christ suddenly appears to him on the road to Damascus, while the he iconography most of the time depicts him on a horse (Michelangelo, Caravaggio, Bruegel, etc.). “He was on the road, not far from Damascus, when a sudden light, coming from the sky, shone around him. He fell to the ground. He heard a voice say to him: Saoul, Saoul, why are you persecuting? Saul asked: Who are you lord? I am Jesus, the one you are persecuting. Leave, go to the city and there you will be told what to do. His traveling companions were motionless, dumb, stunned. They heard the voice but saw no one. Saul was lifted up; he saw nothing and yet his eyes were open. They led him to Damascus, leading him by the hand. (Acts of the Apostles, 9, 3-9, Bayard Bible). No horse. There is nothing to indicate that Saul was unhorsed from a horse — The Unhorsed is the title of a book by Pascal Quignard at Grasset in 2012. Florence Delay slips into this difference between text and images and thereby revisits famous (or not) conversions to Christianity in a different way, with some aversions too and a penchant for polytheism – from Saul the persecutor to Paul the inventor who believed that we are never stronger than when we are weak.

This Christianity, which is sorry for the weakening of the liturgy, is that of the Bishop of Digne, Monsignor Bienvenu, who in Wretched gives Jean Valjean candlesticks to thank him for having stolen silver cutlery from him. It is the Christianity of the “Charity” of Péguy and of Jeanne de Bresson. It is still the Christianity of Bernanos, of the rage that animated the author of Great Cemeteries under the moon, in a freezing “dead parish”, haunted by the corpse of Monsieur Ouine. We like how Florence Delay recalls the way Maurice Pialat responded to the boos by raising his fist when Yves Montand announced that he had won the Palme d’or in 1987 for the adaptation of Bernanos’s novel, Under Satan’s Sun. At the end of the book, a bit like a signature, in reference to an Amerindian tale, something nevertheless thaws with the arrival of spring and after the long winter that we sometimes have the impression of going through today: the word of a young girl nicknamed “Silent-Until-Thaw”.

Each text briefly tells a story, captures, vividly, a golden, distant, terrible, funny or recent legend. The whole ends up forming a story, almost autobiographical. Following Paul, we meet a lot of people. The choices, never arbitrary, have always been those of Florence Delay. If there are no horses on the road to Damascus, we also come across many animals, a whole bestiary, a Noah’s ark. A jamb separates the soul from Bresson’s donkey in Random balthazar. “Everything I thought he would give me, Bresson confided to Godard about this recalcitrant donkey, he refused me, and everything I thought he would refuse me… he gave it to me. The Scriptures are full of animal stories that one encounters in museums and which accompany everyone on the road to conversion, for example the thorn that Saint Jerome removes from the paw of a lion (Carpaccio), the dog with the the angel who leads Tobias so that his blind father recovers his sight (Verrocchio), the birds converted by Saint Francis, the cantor of Lady Poverty (Giotto), or the dove with an olive branch at the end of the deluge (Picasso).

Florence Delay gives a special place to the pig, this time the pig of Saint Antoine and Flaubert, which we tend to disregard too unfairly as the symbol of impurity. Based on a legend, it relates that the nobles of Spain begged Saint Anthony to abandon his hermitage for a time to come and heal a blind and paralyzed son, a demon-possessed wife, a lost daughter… After he accomplished his miracle, a sow approaches him and holds him by the bottom of his coat, making him understand that he must now save his little pig, also blind and paralyzed. Saint Anthony then performed another miracle and the animal, cured, left its mother to go with it to the desert. Afterwards, people never stopped worshiping Saint Anthony’s pig. As for Flaubert, Florence Delay regrets that he withdrew it in the final version of his singular Temptation. “The pig – to which, it will be understood, I am very attached – has disappeared from the final version. I’m very tired of it. His idea of ​​happiness (“why am I in the barnyard, near the stables’ stream, marveling at my full length in the little calf’s dungeon!”) amused me and his “I’m bored à ourance”, this boredom that the hermit of Croisset shares with the hermit of Thebaïde, this colossal boredom that one sometimes feels in religion as in literature, I flattered myself to know it. »

Finally, fish occupy a special place. They are the “sign” of the beginnings of Christianity. One of the characteristics of this aquatic “animal” is that it never sleeps, hence the connection with the first Christians. Do not sleep, do not fall asleep, because the “master” (or death) can occur at any time. A virtue which is not to reassure Florence Delay, whose astrological sign is that of Pisces (the analogy is not very Catholic) and who apparently is lucky enough to have good sleep. In the absence of a horse, there are therefore fish on the road to Damascus…

Brief conversion: Florence Delay (There is no horse on the road to Damascus)