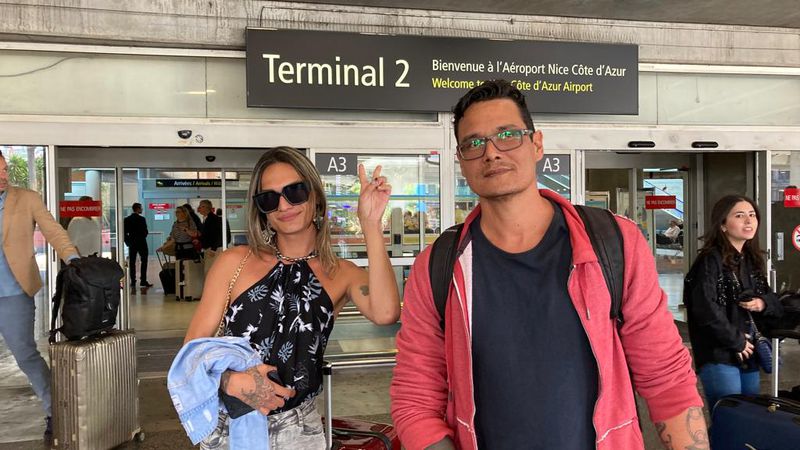 The team of “Pacification” – a film by Spaniard Albert Serra in competition for the Palme d’Or – climbed the steps of the Cannes Film Festival on Thursday. Pahoa Mahagafanau and Matahi Pambrun, two of the Polynesian actors in this feature film shot entirely at Fenua, walked the red carpet. Reportage.

A dress inspired by Queen Pomare, worn by a Polynesian actress on the steps of the Cannes Film Festival… The event took place on Thursday with the presentation of the film “Pacification” by Spaniard Albert Serra, entirely shot in Polynesia in August 2021 The story centers on the life of a High Commissioner, played by Benoît Magimel, who suspects a resumption of nuclear testing. Pahoa Mahagafanau and Matahi Pambrun, the two main Polynesian actors in the film, traveled from Tahiti to attend the screening.

Arrival of the two actors at Nice airport.

The Cannes adventure begins a few hours earlier, at Nice airport. Barely disembarked from the plane, Pahoa and Matahi are welcomed by a festival delegation. Departure for Cannes in an official car, and it is the beginning of a long glamorous and media marathon.

First step, a photo shoot on the Majestic beach, a stone’s throw from the Palais des Festivals. Matahi, who arrived on the film as an extra, did not expect to see his role develop to the point of seeing his name at the top of the credits. A year and a half later, he was invited to the prestigious Cannes Film Festival. “I’m happy to experience this. It’s certainly the first and last time in my life so I’m enjoying it!”

Matahi in the middle of a photo shoot on the Majestic beach.

Same feeling for Pahoa, aka Shanna in the movie. She had never come to France, and here she is welcomed as a star. “For the moment, I’m living it well. Afterwards, if it continues, I don’t know”, she smiles. An hour before climbing the stairs, Pahoa has her hair and make-up done in her hotel room. Then she puts on her train dress in tapa and Polynesian motifs. His goal ? Don’t trip!

Pahoa put on the dress she will wear to climb the steps of the Palais des Festivals.

On the steps, the atmosphere rises thanks to the DJs. Photoreporters and cameramen film the spectators before the arrival of the actors… “We are pleased to welcome the crew of the film ‘Pacification: Torment on the Islands’, announces the announcer. And here are the actors at the foot of the steps of the Palais des Festivals.

Slowly Pahoa, Matahi and the entire film crew are advancing on the red carpet. Head to the big official screening room of the festival to discover this feature film that they haven’t seen yet. 2h40 later, the verdict of Matahi falls: “Psychedelic, psychedelic… It’s artistic, it’s an auteur film, so you have to be ready to see this kind of film. If you go there and you expect to see Spiderman, you go to be surprised.”

After the film, it’s time to party on a boat. Music, champagne and a view of the Croisette. Pahoa has changed her outfit. The night has only just begun, and his plan remains the same: “Enjoy and then go home. And have memories!”

Cannes: Polynesians climb the steps of the festival for the film “Pacification” in the running for the Palme d’Or

Cannes: before the Palme d'Or, the parallel sections give their prizes
The precarious apartments sadly made famous by the movie “Parasite” will disappear in Seoul
And the palme d'or for the best exchange of the year goes to... Binance!
Tweet
Share
Share
Pin
Other links: https://awardworld.net/resources/