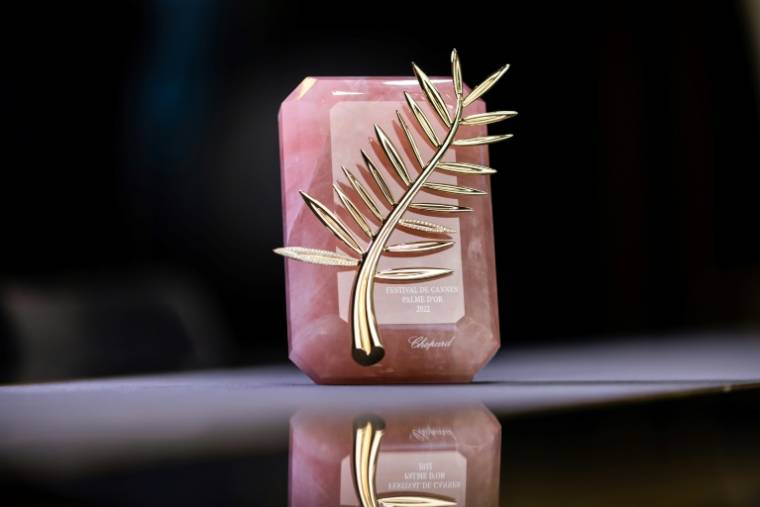 The Palme d’Or made by the jeweler Chopard for the 75th edition of the Cannes Film Festival, May 10, 2022 in Meyrin, near Geneva (AFP / PIERRE ALBOUY)

Will the most followed tiktokeur in Europe, Khaby Lame, eclipse Tom Cruise? For its 75th edition, the Cannes Film Festival, a venerable meeting place for world cinema, has embarked on a frantic quest for a new lease of life.

This year, the Festival has dumped its historic partnership with Canal+, an emblematic cinema channel in the 1980s and 1990s, which notably broadcast the opening and closing ceremonies.

Instead: a surprising coupling between public service (France Télévisions) and Brut, which should make it possible to address, in particular, the younger generations.

It claims 500 million spectators in more than 100 countries, mainly among 18-34 year olds.

Quite a symbol, at a time when cinema in theaters is getting old, suffering the brunt of competition from series and streaming.

Many young people only go to theaters for superhero, Marvel or DC Comics films.

However, “the themes addressed (in the films of) Cannes resonate a lot with young people around the world”, explains to AFP the boss of Brut, Guillaume Lacroix, who sees in the partnership the means of making the festival “even more inclusive generationally, and in terms of diversity”.

Several schemes are already helping young shoots hatch, such as the Cinéfondation or La Fabrique Cinéma, and the Festival has just refocused the “Un Certain Regard” selection on new talents.

A year after the rejuvenation offered by the Palme d’Or by rewarding a thirty-year-old, Julia Ducournau, for “Titane”, the competition welcomes veterans like David Cronenberg (79 years old) or the Dardenne brothers (68 and 71 years old), but also several “juniors”, like Lukas Dhont, 30 years old, or Saeed Roustaee, 32 years old.

The red carpet, where there is a strict dress code deemed by some to be anachronistic, has it become “has been”? (AFP / CHRISTOPHE SIMON)

Like the world of cinema as a whole, on the image side, Cannes “needs to reach a new generation and to modernize”, judges Julien Pillot, teacher-researcher in economics at Inseec.

The red carpet, where there is a strict dress code deemed by some to be anachronistic (heels for women, bow ties for men), has it become “has been”?

“Alongside a Tom Cruise who will talk to the +boomers+ (baby-boom generations, editor’s note), there is a whole generation of super glamorous actors in Cannes, hyper followed on social networks” and next to whom the new media do not want to pass, underlines Mr. Pillot.

American actor Tom Cruise on the red carpet for the premiere of the film ‘Top Gun: Maverick’, on May 6, 2022 in Naucalpan de Juarez, Mexico ( AFP / CLAUDIO CRUZ )

A favorite social network for teens and paradise for ultra-short videos, TikTok, also a new official partner, will broadcast the rise of the stairs every day, while Instagram will take advantage of the Cannes buzz to highlight some of its influencers – unrelated elsewhere with the 7th art.

And, consecration, a “TikTok jury”, on which Khaby Lame, 100 million subscribers, will sit, will decide between videos of 30 seconds to 3 minutes for an official prize, awarded on May 20 from the hands of the general delegate, Thierry Frémaux.

“If Michel Hazanavicius or Martin Scorsese were 16 today, they wouldn’t be doing Super-8 but would be using their phones to create content, tell stories”, explains Guillaume Lacroix, who assures that Brut allows Cannes to be present “wherever” the younger generations are.

Its media will even transpose the Festival venues and the Croisette into the “metaverse” (virtual world) of Fortnite, one of the most popular video games in the world which claims nearly 200 million users.

In the costume of a journalist, an actor or a director, the players will have access to various quests: “to carry out interviews”, “to pass a casting” or “to participate in the ascent of the steps”…

Faced with these all-out initiatives, “people will laugh, criticize”, predicts Julien Pillot. “But (the cinema) must evolve with the times, so as not to die”.