Rakel, 23, has all the plans in the world, except that of becoming a mother. When she discovers that she is six months pregnant following a one-night stand, it’s a disaster! Adoption is the only solution. Then appears Ninjababy, an animated character out of his notebook, who will make his life hell… Sometimes obscene but always funny, this story of pregnancy, sex and ejaculation is irreverent[1]profitable at will, and offers us high-flying dialogues at the same time as an uncompromising portrait of a modern woman. Jubilatory.

THE STRANGE STORY OF THE WOOD CUTTER by Mikko MYLLYLAHTI – Preview

A village under the snow in the depths of Finland, life is regulated like music paper, immutable between work, ice fishing, card games. Feelings are not made public and speech is rare. All this will be shattered after the announcement of the closure of the factory. The main character sees his bearings collapsing one after the other. How to rebuild when everything is going to hell? The appearance of a preacher, a bit of a wizard, will not allow you to escape destruction. This fi lm, which brings to mind the universe of Roy Andersson, distils a subtle humor in shots that follow each other like so many tableaux. A magnificent work, served by sublime images. Everything seems fixed but moves in small steps.

Richie Bravo is an Austrian crooner, and occasional gigolo, who survives by singing songs to groups of retired people. His world begins to crumble when his adult daughter suddenly bursts into his life and demands the money he never gave her. Halfway between documentary and fi ction, Ulrich Seidl’s human comedies (Paradis: Amour, Sous-Sols) are known for their biting irony and gloomy humour. Set in an off-season seaside resort in Italy, Rimini is perhaps his most accessible work to date, centered on the[1]turn of a magnificent loser brilliantly played by Michael Thomas. The themes are so gloomy (senility, alcoholism, sad sex, ghosts of old Europe…) that we reach a form of derision and humor in the pathos, all underlined by the decors of empty hotels and landscapes snowy. The result is a strangely touching fi lm about aging.

THE ORIGIN OF EVIL by Sébastien MARNIER 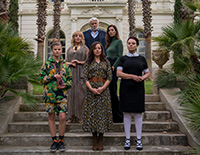 In a luxurious villa by the sea, a modest young woman finds a strange family: an unknown and very rich father, his wife who is a fan of[1]tasque, his businesswoman daughter, a rebellious teenager and a disturbing servant. Someone is lying. Between suspicion and lies, mystery sets in and evil spreads… After Irréprochable and L’Heure de la sortie, Marnier here affirms his love for Chabrol with this acerbic painting of the bourgeoisie and the class struggle, where all the characters are also his[1]laud each other. Between social criticism, a game of pretense and a tense thriller (some sequences evoke De Palma), the director’s virtuosity is in no doubt as to maintaining an ambiguity and we completely agree.

Screening of program n°2 in the running for the prize. Duration: 1h34

ENJOY THE GARBAGE! by Romain Dumont

For Christmas, three garbage collectors, Élie, Nino and Belz, are surprised to be received for dinner at the home of the Prime Minister and his wife. They go there, enthusiastic and candid, without suspecting that on the menu, they have a painful series of disappointments and manipulations in store for them.

A biomechanical fusion between Marlène, a secretary in her post for 30 years, and the printer model X 3000 will generate a new generation of workers: the seniors 3000. The revolution in the world of work is underway!

HIS HIGHNESS PROTOCOL by Aurélie REINHORN

“Excellent first day to you of the rest of your fairy life where all will be magic, enchantment and mischief. Well, normally there is a choreography but there, I really don’t want to do it for you. Once upon a time, Wanda and her debut as an employee in an amusement park.

Nicky, a marginal and eccentric woman, decides to end it after losing her last benefits. She entrusts her dog Izy to her neighbour. But when she brings the dog back to her, a race against time begins for Nicky in full overdose.

MOM, WHAT IS THE DOG? by Lola LEFEVRE

Gwen is a young girl of barely 11 years old. As she experiences her first emotions, she surprises her dog laughing.

If you want to know how to go from charcuterie to Super 8 or how to go from boudin to the red carpet, everything will be revealed to you in this flowery and family documentary. A tender and amused walk with an atypical 82-year-old filmmaker and his wife. Screening followed by a charcuterie discussion in the presence of the film crew and good products to nibble together while talking about the film.

> Credi September 21 at 5:30 p.m. in the presence of the director and Roger Batteault, a former pork butcher in Beaune, featured in this film. Learn more

Welcome to the enchanted world of capital escape. The keys to fortune: knowing how to hide, finding accomplices and taking advantage of all the loopholes. For us mere mortals, there remain austerity policies and the joy of living in an increasingly unequal world. Between Paris, Washington and Luxembourg, from Société Générale to HSBC, passing through globalized brands, we are going to track down the circuits of “tax optimization” – tremendous understatement! After having deciphered the world of the media in The new watchdogs, Yannick Kergoat attacks with the same sardonic tone the mechanisms of XXL fraud, in a theater of puppets where the political class seems to turn their heads away.

> Single screening Sadi 24 September at 9 p.m., in the presence of the director. Learn more

A marching band of ten merry comrades and friends decides to join, on foot, “The carnival of the world” in Germany. This journey, which was only supposed to last for a weekend with friends, will last six months and will profoundly change the lives of each of them. An existential quest under cover of a “very” great moment of absolute freedom in this ramshackle mockumentary. A “very Belgian trip!” »

> Sadi 24 September at 3:45 p.m. in the presence of Bouli Lanners and Vincent Solheid, actor and co-screenwriter. Learn more

WITHOUT FILTER [TRIANGLE OF SADNESS] by Ruben ÖSTLUND – Preview

Carl and Yaya, a couple of models and influencers, are invited for a luxury cruise that turns cataclysmic and where the power relations are reversed. An explosive and fierce satire of a capitalism gone mad, the new film by Swedish director Östlund (Snow Therapy, The Square) is surely his most irreverent and has not stolen his Palme d’Or. Incisive like a Marco Ferreri who would have parodied The fun cruise and Koh-Lanta, Without filter will make you seasick and shake your guts. A game of Hara-kiri massacre where everything goes: feminism, egalitarianism, racism, narcissism, survivalism… The most caustic, cynical and ruthless film of the year.

> Gromanche September 25 at 3 p.m., in the presence of Bouli Lanners 1er, Benoît Delépine and many festival guests. Learn more