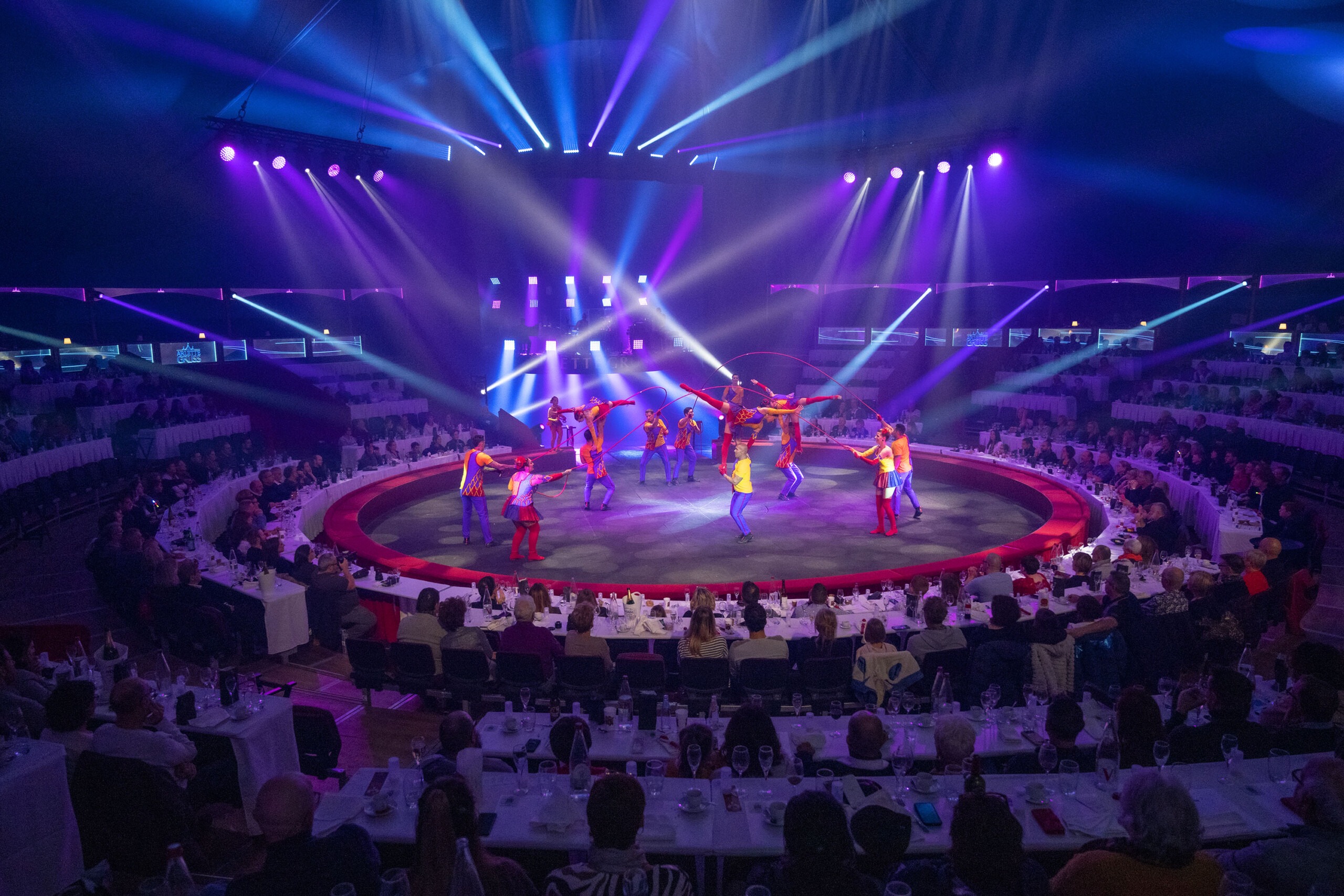 It’s a red and white canvas village, a small rolling paradise. Seen from the outside, we sometimes imagine this environment as impenetrable and yet ” the Arlette Gruss tribe » continues to grow over the years. Around the hard core formed by the Gruss familythese are close to 120 people from all walks of life who shape your dreams on a daily basis. One thing is certain, for the Gruss tribe and those who travel alongside them, nothing is more unpredictable, harder sometimes, but above all more beautiful and fulfilling than a life in the circus…

A difficult year 2021 but which marks the beginning of a new era!

” In October 2020, it had barely gained momentum when the thirty-sixth Arlette Gruss Circus Tour was immediately interrupted by the second wave of a health crisis as tenacious as it was unpredictable. Back in our Sarthois winter quarters at La Fontaine Saint Martin and seeing ourselves forced into the strictest immobility, we then had the conviction that all this time, at first sight wasted, would mark the beginning of a new era for the red and white house. This is how in the mind of my dad, Gilbert Gruss, the idea of ​​a new marquee with an innovative interior layout, capable of transforming a traditional circus into a traveling dinner show and this… into a snap of the fingers ! Laura Maria Gruss.

A prosperous year for space exploration, 2021 also saw the birth, on the edge of the green meadows of Sarthe, of a gleaming vessel made of a dazzling white canvas. Baptized the Ark, the Arlette Gruss circus’s new traveling juggernaut is a great illusion act all on its own, since from its standard configuration, it can evolve into a real dinner-show room with a single snap of the finger! On the shelves since 2019, this project that looks like a dream come true is also the fruit of the combination of the talents of Gilbert Gruss and Julien Lhomme, his friend and alter ego.

To mark this exceptional year, we wanted to present to you the portraits of those who make these moments, moments like no other and frozen in time.

“The strength of a passionate couple”

Gilbert, son of Madame Arlette Gruss, founder of the circus, is now at the head of the family business. As he likes to say, it is his mother’s soul that guides him through the various trials he encounters. As for his legendary creativity, he draws it from the eyes of his wife Linda, also a child of the ball with the circus pegged to her body. Sixth generation of a circus family, Linda would not leave her nomadic life for anything in the world, her children always by her side.

Accomplished and versatile artists, Gilbert Gruss and his wife Linda Biasini have worked in various disciplines throughout their artistic career. Elegant on her bike or a real mermaid in her pool of water, Linda always performs her numbers with grace and professionalism. Gilbert enjoyed playing the clown, but like his wife, daughter and uncle, he was passionate about horses. It’s hardly surprising when you know that the Gruss have distinguished themselves in equestrian acts for six generations!

This young 30-year-old teacher is the only itinerant teacher in France sent by the National Education. Originally from Alsace, she began her traveling adventure with us in September 2016 and savors the “unusual” aspect a little more every day. Here the classroom is a trailer specially designed for this purpose and the children are of all ages and from all walks of life. Thanks to Laurence, the children of artists and employees of the Arlette Gruss circus can attend school from the small section to CM2.

“A cuisine with small onions! »

At each meal, between 90 and 100 people parade through our traveling restaurant. At the helm, the solid chef Andriy, a former veterinarian, directs the maneuver. Arrived with us almost ten years ago as an animal caretaker, he took advantage of the hasty departure of the chef at the time to realize his dream: to go behind the stove! Today, he has the latest tools to delight his little world since 750,000 euros were invested in this mobile restaurant. To optimize the equipment and layout, Gilbert Gruss was able to count on the valuable advice of Christian Sinicropi, starred chef of the Palme d’Or in Cannes who inaugurated this project.

Rather than dreaming his life, Kevin is living his dream. He does it wisely knowing, like last year, to take a little distance from the track so as not to succumb to the wear and tear of the tours. He does it with elegance. However, the passion for the circus has never left him and it is in his name that he comes again to put his unique grain of voice on this new creation. If the Arlette Gruss circus takes care to renew itself season after season, there are landmarks that the public cannot do without and the Mr. Loyal is indisputably one of them. He is the link between you, the public, and the artists, so that joy and emotions are born.

Against the backdrop of absolutely new and sometimes even revolutionary acts, the new golden generation “made in Arlette Gruss” activates the machine to reinvent the circus for an exquisite and unforgettable two-hour journey. Because we don’t do anything like the others, let’s finally reveal its eccentric side to the circus!

Witness a subtle and unique alliance between the show by Arlette Gruss and gastronomy with our partner Lecocq caterers and attend our dinner show on Saturday March 5 at 7:30 p.m. and Friday March 11 at 7:30 p.m.

>More information on the program here!

Cirque Arlette Gruss is back!