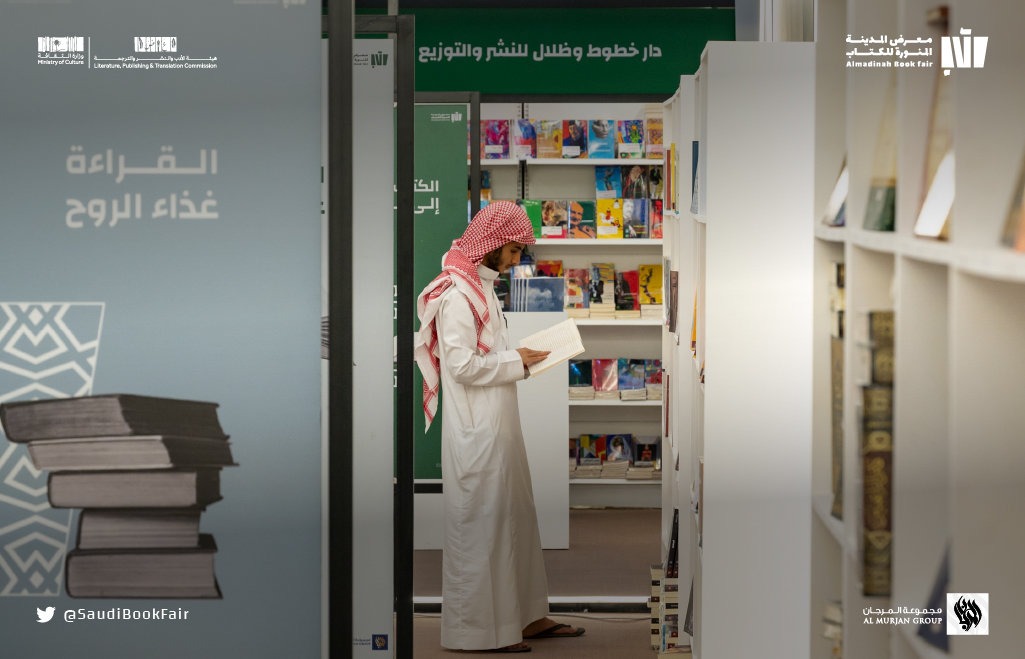 MIDINA: More than 200 publishers and other organizations are taking part in the first Madinah Book Fair, which started on Thursday at the King Salman bin Abdulaziz Exhibition and Conference Center.

During the opening ceremony, Mohammed Hassan Alwan, CEO of the event’s organizing institution, the Literature, Publishing and Translation Commission, detailed the objectives of this first book fair. “The Commission seeks to fulfill its mission in the book fair sector based on partnerships and integration. We want to offer the inhabitants of the city a revival of the cultural scene, and the publishing sector book fairs allowing cultural and economic development.

“We want the city’s book fair to be an annual exhibition that occupies a special position in all Arab book fairs,” he added. The ten-day event, held under the patronage of Madinah Governor Prince Faisal bin Salman bin Abdulaziz, will continue until June 25. It includes workshops, cultural and theatrical programs, as well as events aimed at children, opening a door to the creation of literature and the publishing sector.

The organizers said that the event aims to improve the cultural status of Madinah, boost the Saudi publishing industry, encourage cultural exchanges between countries, offer readers a special cultural journey, and finally to highlight highlights the role of reading in raising awareness and improving the quality of life.

In a message posted on June 6 on Twitter, the official account of Saudi Book Fairs welcomed the launch of the fair. “In the heart of Madinah, the activities of the cultural program of #Madinah_Book_Fair_2022 begin to offer an ample choice of knowledge which promises visitors to experience a different cultural event.”

Among more than 200 participating publishers and organizations, more than 80 are from the Kingdom, including universities, research centers, foundations, commissions, bookstores and libraries. The event drew huge crowds from day one.

“I came today with two suitcases to fill them with a selection of books that I came to choose from the living room,” confided to Arab News Amir Alsaiegh, 46-year-old literature professor and great bibliophile. “I have a long list for today, and I’m delighted with the large number of publishers present at this show, which exceeded my expectations.”

Ibtihal al-Jabri, 17, visited the fair with her three sisters who, like her, are all avid readers. “I was really excited about the opening of the book fair when it was announced two weeks ago,” she says.

Her sister Nouf, 22, added: “This event is the first of its kind in Medina. I had been waiting for it for so many years. I am amazed by it and I am ready to come here every day.”

“I love reading. I came today with my parents because they like to read, like me”, says Samia al-Nahdi, 6 years old.

The Madinah Book Fair is part of the Book Fair Initiatives, launched by the Literature, Publishing and Translation Commission, which aims to organize fairs throughout the Kingdom to give Saudi readers the opportunity discover works published by local, Arab and international publishers, and learn about the latest developments in the publishing sector.

To accompany the launch of the show, two other events took place on Thursday. The first was the opening of a new museum at the King Abdul Aziz Complex for the Waqf Libraries, which was inaugurated by Prince Faisal.

Fahad al-Wahbi, secretary general of the organisation, told Arab News that “this museum aims to unveil important items from archaeological and historical collections: ancient manuscripts – some of which date back thousands of years – precious rare Qurans that represent different historical periods and collectibles from the Prophet’s Mosque “.

The other event was for the King Salman Charter for Architecture and Urban Planning, an organization celebrating the essence of architecture “salmaniand who organized an exhibition in Riyadh, Jeddah, Abha and Dhahran, which is now in Medina.

“We also organized it at Expo Dubai 2021, and we are going to do it at the international level because it is an international methodology that can be applied everywhere”, underlines to Arab News Soumaya al-Soulaimane, CEO of the Architecture and Design Commission of the Ministry of Culture.

“This is one of 33 initiatives of the Architecture and Design Commission. This is one of the first and most important, given the impact we expect.”

She adds that the exhibition was intended to reflect that “the experience we had in the city of Riyadh, thanks to the patronage of King Salman, was so important that it fostered a development of identity in the capital, through the many projects that have emerged”.

“From an architectural point of view, the Charter presents a masterpiece that has gained international recognition. There are six values ​​in the Charter which are guiding principles, including continuity and authenticity, individual and community, with the latter values ​​relating to innovation and sustainable development,” she concludes.

Crowds flock to the opening of Medina’s first book fair