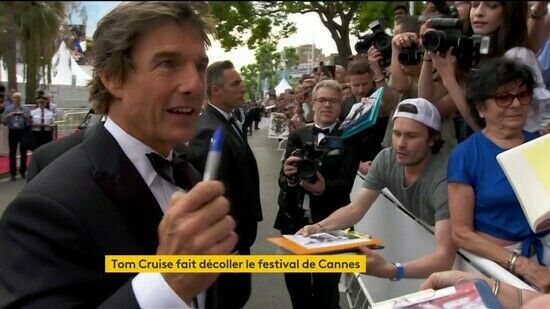 Find here all of our live #CANNES

7:04 p.m. : “I make all my films for my audience, for my fans. This film has been awaited for decades, I would like the public to appreciate it, that’s what I want to create”says Tom Cruise at the microphone of franceinfo.

6:58 p.m. : Tom Cruise will soon be walking up the red carpet steps. He takes the time to sign autographs. 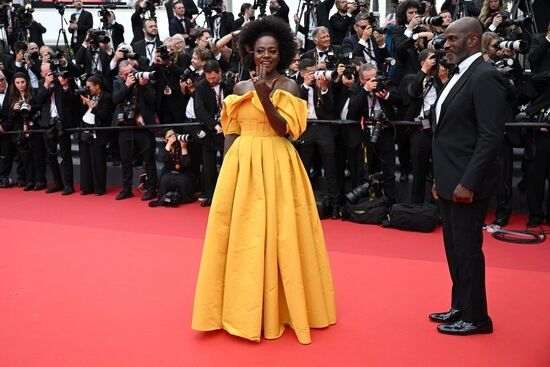 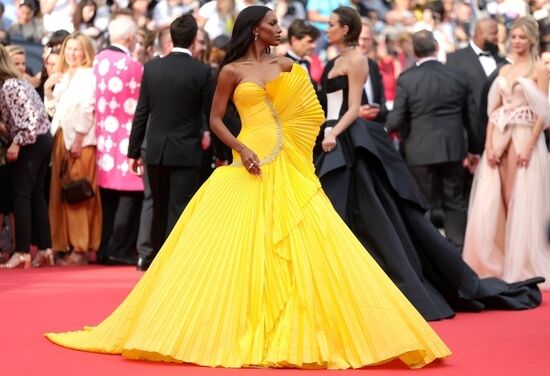 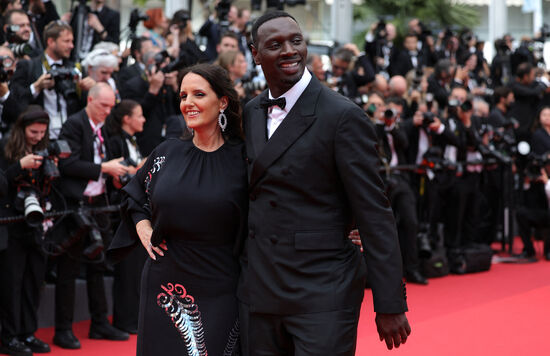 6:45 p.m. : In a masterclass at the Cannes Film Festival, Tom Cruise made a plea for cinemas: “Since the age of 4 I have wanted to make films. I grew up with the films of Buster Keaton, Harold Lloyd, Charlie Chaplin. Making films has been a great journey for me.“, declared the Hollywood star in front of 1000 people who gave him a long ovation.

6:41 p.m. : The emotion of seeing Kirill Serebrennikov conclude the presentation of his film with these few words! #Tchaikovskyswife #Cannes2022 https://t.co/XlwBQry3w3

6:41 p.m. : “No to war!”launched the Russian director Kirill Serebrennikov, at the end of the presentation of his film, Tchaikovsky’s wifein the running for the Palme d’Or. “I am absolutely convinced that the culture and the people of the culture are capable of ensuring that this war ends” he continued, to applause.

6:19 p.m. : This film “has a lot of things, history, colonization, filiation between father and son, France, Senegal… It’s still quite personal.”

The actor comes to present Skirmishers, selected in the category “Un certain regard”. He specifies that he came to “fan” to see Tom Cruise. 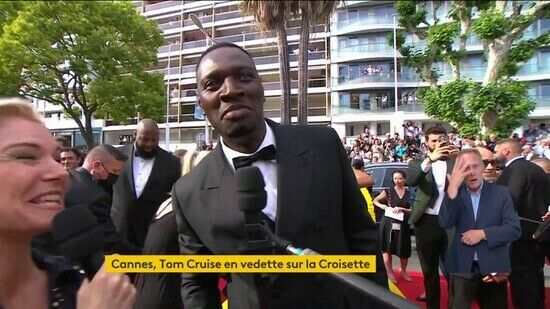 6:16 p.m. : Today on the Croisette everyone is looking for Tom Cruise 👀 #TopGun #CannesFilmFestival2022 https://t.co/YqQCa3reRY 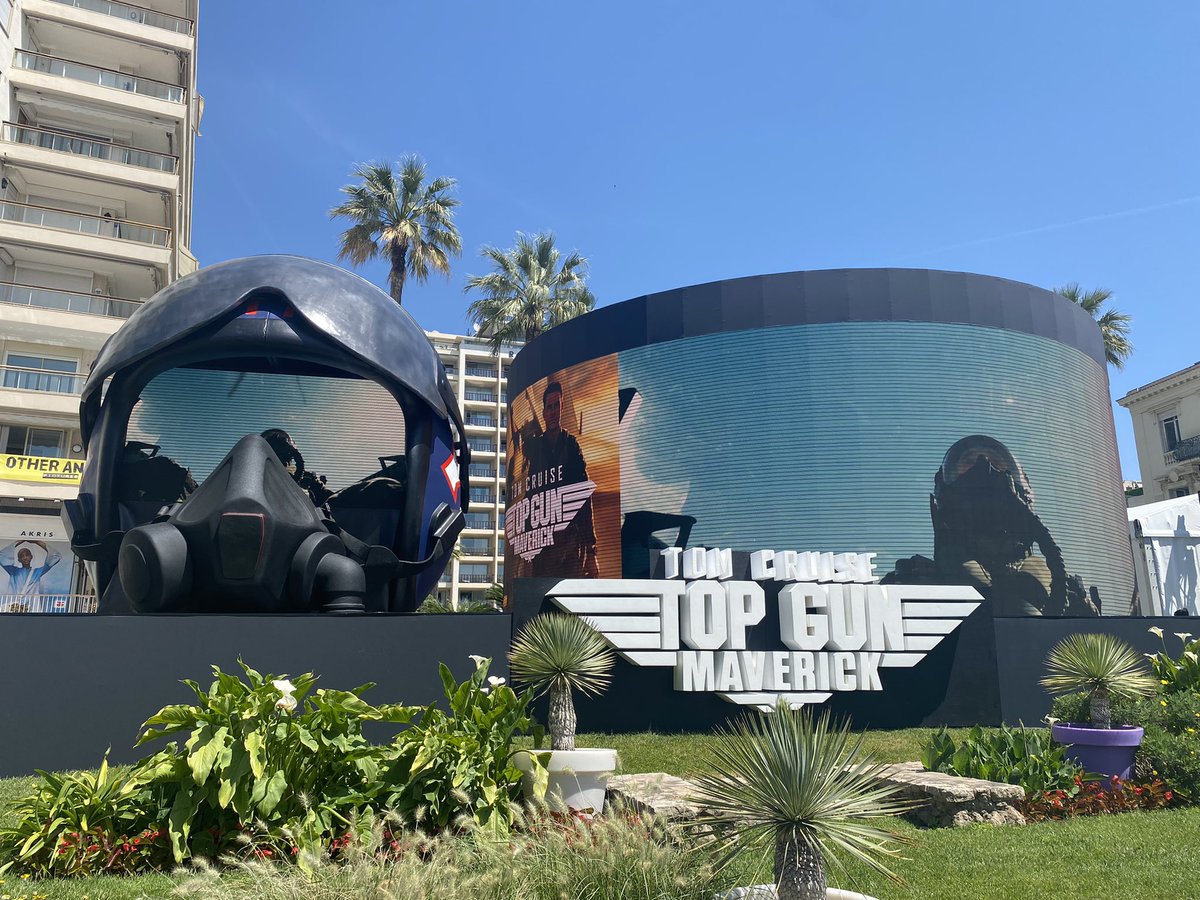 6:17 p.m. : Tom Cruise arrived on the Croisette this afternoon. The Patrouille de France should pass over the red carpet when the American actor arrives, explains host Louise Ekland on our antenna. Follow our live.

6:01 p.m. : “I make films for the big screen. My films will not be released directly on the platforms. Going to the cinema is sharing an experience, whatever our culture or language. I go to see the films in theaters when they come out. I put on my cap (to not be recognized). I like to see the trailers.”

Tom Cruise defended theatrical films and the magic of the big screen in the face of the explosion of streaming platforms, during a masterclass at the Cannes Film Festival, where he came to present the new Top Gun.

4:26 p.m. : Last glimpse of Cannes. Thank you for all the love I received during the past few days. Thank you to the people who make the Festival such a unique rendezvous for the international film community. Being back to France was an amazing experience – as always. Can’t wait to be back. https://t.co/102FfBxsHp

4:38 p.m. : One star chases another. Actor Forest Whitaker announces on Twitter his departure from Cannes after receiving the Palme d’or d’honneur at the 75th edition of the Festival.

4:18 p.m. : I take this opportunity to tell you, for the Culture minute, that you can find all the content on the Cannes Film Festival in our franceinfo Culture section.

4:16 p.m. : @Albert Camus : Sure ! This year you can follow the opening and closing ceremonies of the Cannes Film Festival on France 2 and a daily magazine on Culturebox every evening from 7 p.m. to 9 p.m. Note that the opening ceremony yesterday achieved its best audience since 2011 with 1.77 million viewers, according to figures from Médiamétrie quoted by the public channel. In number of viewers, the opening ceremony did four times better than last year on Canal+.

4:15 p.m. : Where to follow the Cannes Film Festival broadcasts on the public service tv 📺 channel ??? who took over from Canal – de Bollore?? Thank you 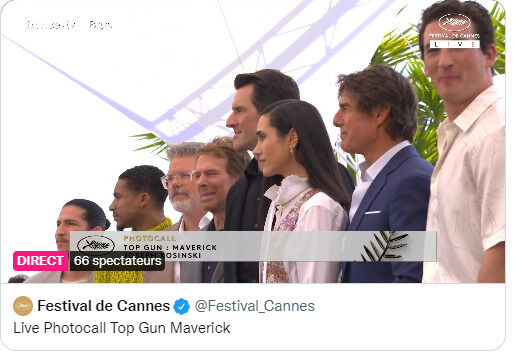 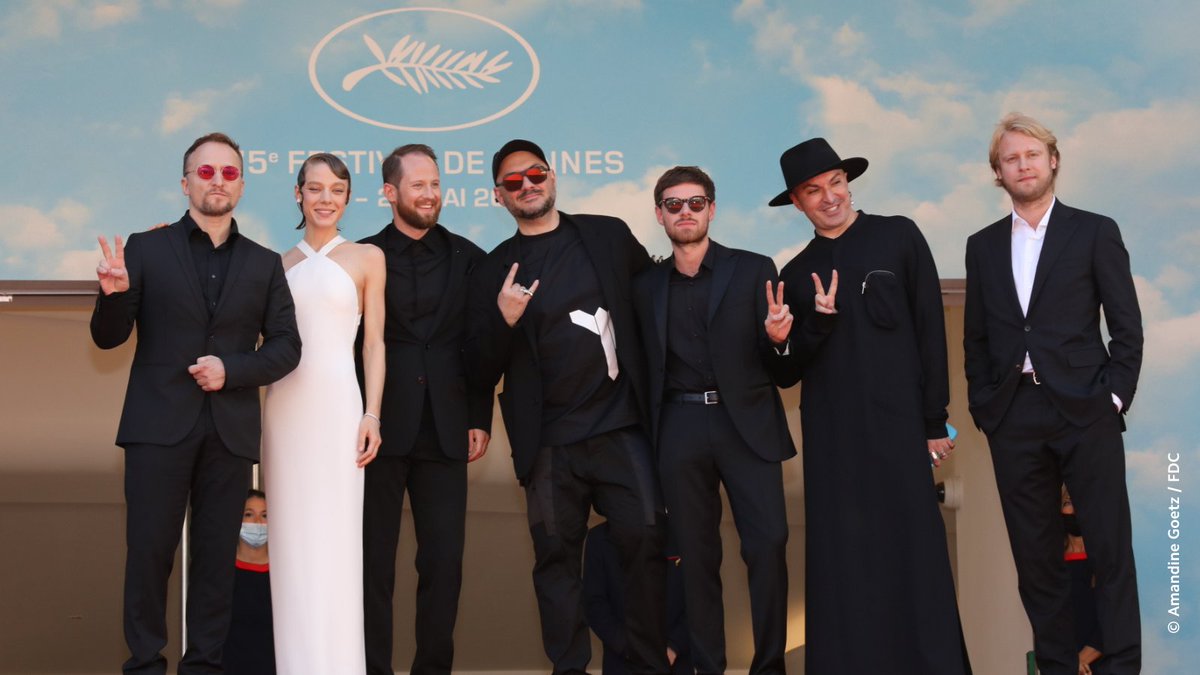 4:37 p.m. : A red carpet but two atmospheres. The Cannes Film Festival is doing the splits by welcoming the Russian dissident Kirill Serebrennikov and the Hollywood star Tom Cruise, for its first day of competition, placed under the sign of the alliance of politics and glamour. Tom Cruise is in the middle of a photo shoot, while Kirill Serebrennikov, 52, known for his daring creations and his support for LGBT+ people, walks the red carpet and opens the competition with Tchaikovsky’s Wife.

3:54 p.m. : In official competition at the Cannes Film Festival with his eighth film, Show-Up, the American director Kelly Reichardt receives this year the Carrosse d’or of the Directors’ Fortnight. Decryption of his audacious cinema by Camille Bigot of franceinfo Culture. 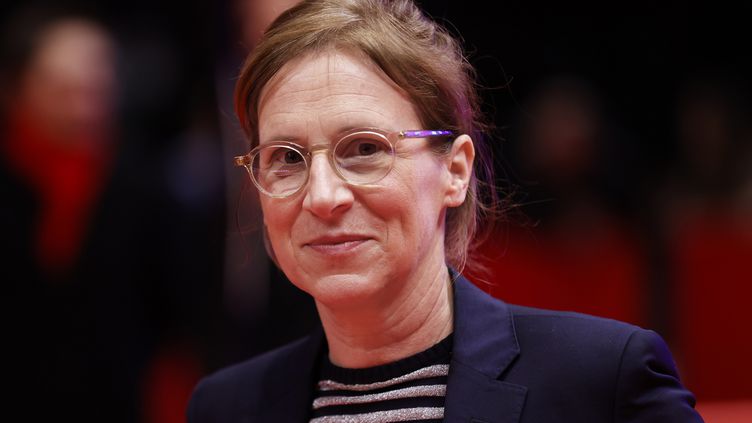 • The first trial of a Russian soldier for a war crime since the entry of troops from Moscow into Ukrainian territory has begun in kyiv. Vadim Chichimarine, 21, accused of shooting dead a 62-year-old civilian on February 28. At the start of the hearing, he pleaded guilty.

• It is probably the hottest day of the week. Temperatures around 35°C are expected in the South and records are likely to be broken. Why is it so hot in mid-May? We asked a meteorologist.

• “He is an honest man.” The opposition condemns the words of Stanislas Guérini on the candidacy of Jérôme Peyrat. The former Elysée adviser was invested in the Dordogne under the colors of the majority despite his conviction for domestic violence.

• Tom Cruise is expected this evening on the red carpet of the Cannes Film Festival to present the sequel to Top Gun. The opportunity for us to dive into the relations between Hollywood and the Croisette. Follow the day here.

Between the Cannes Film Festival and Hollywood, a “love story” without a “happy ending”? Pierre Godon retraces the history of the stormy relations between the two worlds of cinema.

In April, food prices experienced an annual increase close to 4%. How can this worsening of the situation be explained? Yann Thompson offers you to visualize in six graphs the inflation which affects food.

• After more than three weeks of reflection, Emmanuel Macron has chosen Minister Elisabeth Borne as Prime Minister. It is the choice of continuity and the least risk, analyze Margaux Duguet and Clément Parrot.

• “He is an honest man.” The opposition condemns the words of Stanislas Guérini on the candidacy of Jérôme Peyrat. The former Elysée adviser was invested in the Dordogne under the colors of the majority despite his conviction for domestic violence.

• It is probably the hottest day of the week. Temperatures around 35°C are expected in the South and records are likely to be broken.

• Tom Cruise is expected this evening on the red carpet of the Cannes Film Festival to present the sequel to Top Gun. The opportunity for us to dive into the relations between Hollywood and the Croisette. Follow the day here.

• Finland and Sweden have officially submitted their applications to join NATO. “This is a historic moment at a critical time for our security”, believes Jens Stoltenberg, the secretary general of the alliance. Follow the situation in our live. 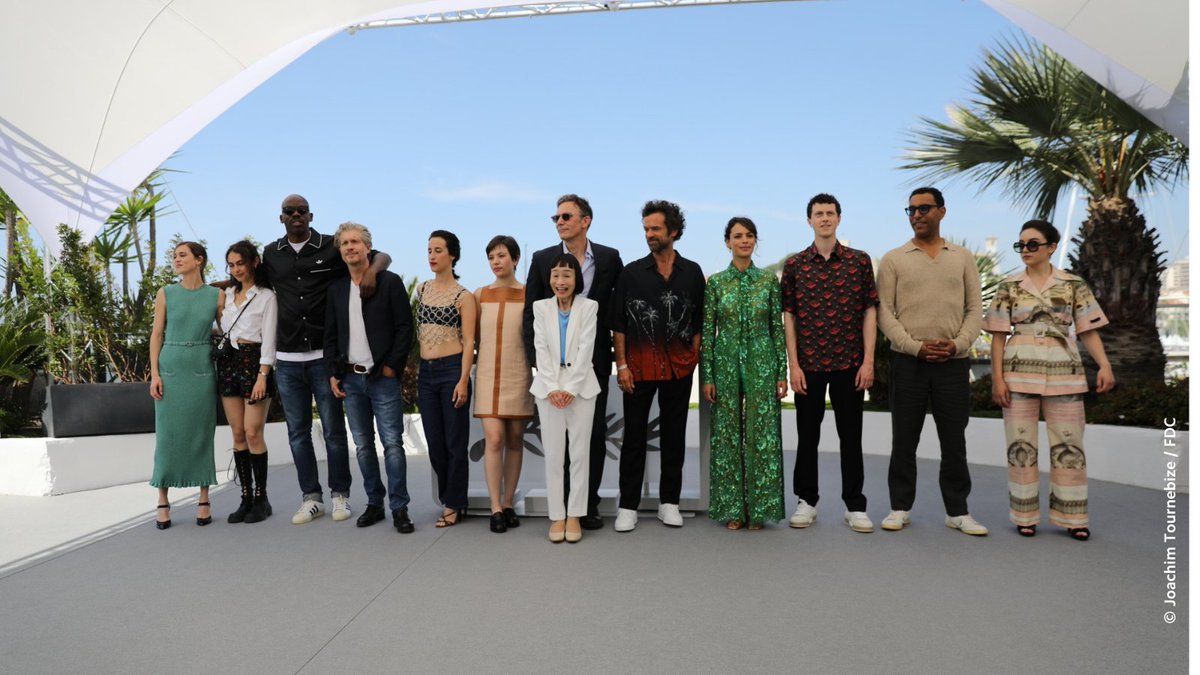 11:59 : On social networks, the Festival shares a snapshot of the film crew’s photocall Cut! by Michael Hazanavicius.

11:34 am : This day is that of the splits since the Croisette will receive for the first time the filmmaker Kirill Serebrennikov, 52 years old. This terrible child of Russian cinema, known for his audacious creations and his support for LGBT+ people, will walk the red carpet and open the competition with Tchaikovsky’s Wife. 11:34 am : Tom Cruise arrives on the Croisette with Top Gun: Maverick, presented out of competition. He is “one of the actors in the history of cinema who in his choices, in his projects, in his work has the greatest success rate”greets Thierry Frémaux, General Delegate of the Cannes Film Festival.

10:30 a.m. : “The major problem with these festivals is that no one promotes films this way anymore. It was a dream twenty years ago. And already, it wasn’t necessarily very effective.”

No more glamorous evenings, ladle caviar on George Lucas’ liner for the new Star Warsthe reconstruction of a Spanish galleon with 800 revelers on board for the Pirates by Roman Polansky? Answers in this article. 10:17 a.m. : After the honeymoon, relations have turned stormy between the Festival and the big American studios since the 1980s. A problem with the calendar, too harsh criticism… “The problem is that Cannes needs Hollywood more than the other way around”recognizes Gilles Jacob, former patron of the Festival.

10:18 a.m. : He may keep his aviator sunglasses but he will certainly trade in his pilot’s suit for a formal tuxedo. Tom Cruise is expected on the Cannes Film Festival red carpet this evening to present the sequel to Top Gun. The opportunity for me to immerse myself in the relations between Hollywood and the Croisette, which have taken separate paths for seven decades.